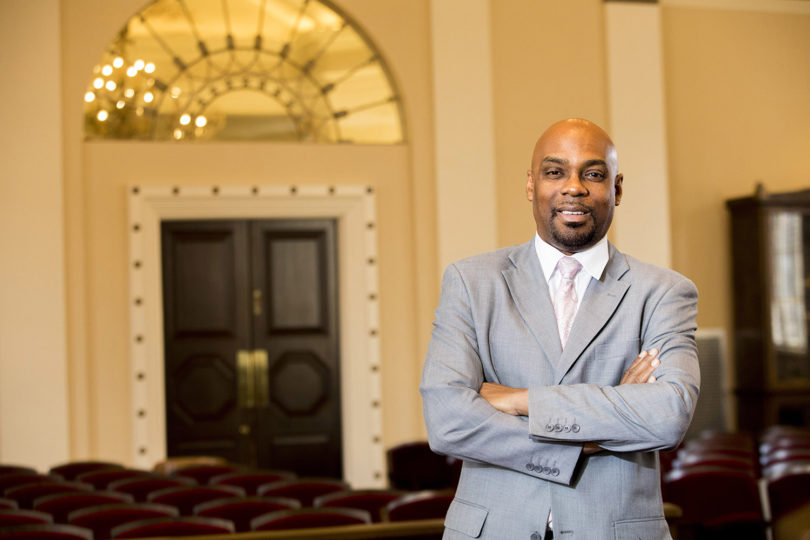 In addition to his work at the UGA School of Law, Gregory Roseboro volunteers with the Feed My Sheep Ministries, which assists the residents of East Athens and those living in the Nellie B. Apartments. (Photo by Dorothy Kozlowski)

When Gregory Roseboro first traveled from Durham, North Carolina, to visit the University of Georgia’s Athens campus in 1980, he was a 17-year-old track and field recruit with dreams of attending law school. During that visit, he met with Larry Blount, the School of Law’s first African-American faculty member.

Roseboro, who earned his undergraduate degree and Juris Doctor from UGA, is now the law school’s executive director of admissions and diversity programs. He has made “reaching back” and helping people—much like Blount did for him all those years ago—a priority in both the UGA and Athens communities. Last month, Roseboro was the staff recipient of the President’s Fulfilling the Dream Award at the Martin Luther King Jr. Freedom Breakfast.

A student at UGA from 1980 to 1987, Roseboro was co-captain on the track team his senior year when one of his teammates was Heisman Trophy winner Herschel Walker.

“I was here during what we call the glory years,” he said. “It was a great time.”

After graduating from law school, Roseboro worked for six years as a settlement negotiator with State Farm and the United Services Automobile Association in Washington, D.C., before returning to Athens to join a private law practice.

“Our society is made up of different people and different cultures,” he said. “If the University of Georgia is going to continue to produce individuals who will be equipped to be leaders in a global society, then we need to have students who reflect that global society.”

He enjoys interacting with the law school’s students, assisting them and helping them overcome challenges.

“What is really rewarding is to be sitting here 24 years later and to see the accomplishments of former students,” he said.

In addition to his work at UGA, Roseboro was the pastor of Piney Grove Baptist Church in Comer from 2001 to 2016, fulfilling a calling toward Christian ministry he had since his senior year of college.

“It was a very gratifying experience, because at the end of the day it was all about the service,” he said.

Although he is no longer in the pulpit, Roseboro ­continues to minister to those in need. He currently volunteers with the Feed My Sheep Ministries, which assists the residents of East Athens and those living in the Nellie B. Apartments.

Roseboro has been married to his wife, Daphne, a public school teacher, for 30 years. They have three adult children. Shantel works in early childhood education and Nicole, after a stint in the military, is a cosmetologist. Gregory II followed in his father’s footsteps by earning his law degree at UGA. He currently is the assistant director of admissions and diversity and inclusion at The Ohio State University’s Moritz College of Law.

Previously, Roseboro was the president of the Fowler Elementary PTO, part of the Clarke County Board of Education parent advisory board, a member of the Court Appointed Special Advocates board of directors, president of the Cedar Shoals High School basketball booster club and a mentor in the Athens-Clarke County School System.

Roseboro said receiving the President’s Fulfilling the Dream Award was a humbling experience.

“I felt blessed to be able to receive the award,” he said. “There are a lot of people who are just as—if not more—worthy of the recognition from the university.”