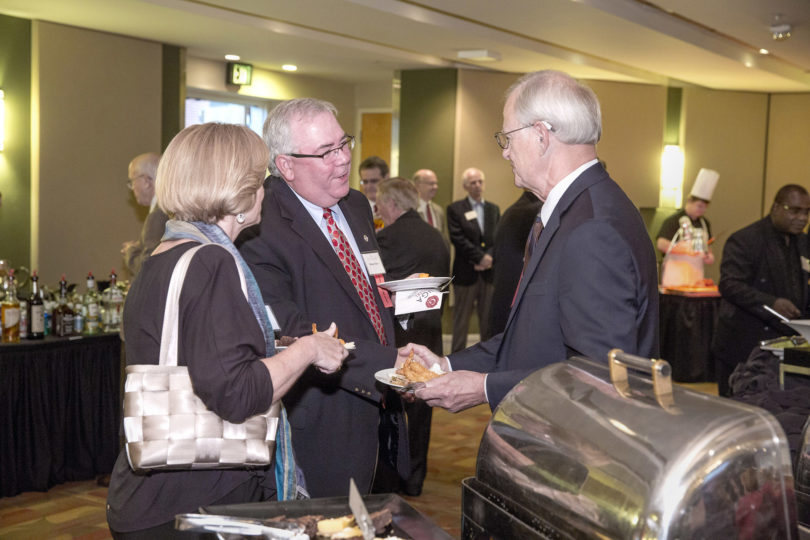 Close to 40 UGA employees who retired since May of last year were honored at a reception hosted by UGA President Jere W. Morehead, Provost Pamela Whitten and the UGA Retirees Association April 30 in Mahler Hall of the Georgia Center.

The retirees—most with at least two decades of service to the university—were thanked by the president for their “day-after-day, year-after-year” contributions. The two longest-serving employees in attendance were Glenn Ames, a professor of agricultural and applied economics, and Michael Floyd, associate vice president for auxiliary services, who each put in more than 40 years at the university.

“Remember that your service to UGA was important and made a difference,” Morehead told the group before presenting certificates of recognition to each retiree.

University System of Georgia Chancellor Hank Huckaby—himself a UGA retiree—was the keynote speaker at the event. Huckaby, who came to Athens to head up the Carl Vinson Institute of Government, went on to become senior vice president for finance and administration. After stepping down from that role, he represented House District 13 in the Georgia General Assembly before being tapped by Gov. Nathan Deal and the Board of Regents of the University System of Georgia to serve as chancellor in 2011. Since then he has initiated changes in the university system, including the ongoing consolidation of institutions, which he said was a necessary move that was done to cut administrative costs and “refocus on the academic side.”

Huckaby urged the retirees to stay connected to the university.

“Higher education is going to need support like never before,” he said.

The UGA Retirees Association includes former faculty, staff and administrators, who become members on their formal retirement from the university. UGARA is governed by an elected council whose members serve staggered three-year terms, plus ex officio representatives from the Office of the President, Human Resources, University Council, Staff Council and the Alumni Association.