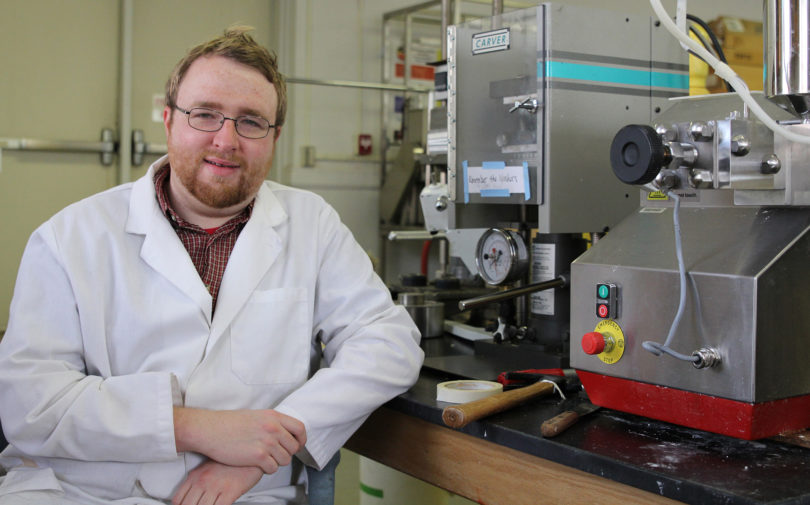 Athens, Ga. – Bioplastics made from protein sources such as albumin and whey have shown significant antibacterial properties, findings that could eventually lead to their use in plastics used in medical applications such as wound healing dressings, sutures, catheter tubes and drug delivery, according to a recent study by the University of Georgia College of Family and Consumer Sciences.

The bioplastic materials could also be used for food packaging.

In particular, albumin, a protein found in egg whites, demonstrated tremendous antibacterial properties when blended with a traditional plasticizer such as glycerol.

“It was found that it had complete inhibition, as in no bacteria would grow on the plastic once applied,” said Alex Jones, a doctoral student in the department of textiles, merchandising and interiors. “The bacteria wouldn’t be able to live on it.”

The study appears in the online version of the Journal of Applied Polymer Science.

One of the researchers’ aims is to find ways to reduce the amount of petroleum used in traditional plastic production; another is to find a fully biodegradable bioplastic.

The next step in the research involves a deeper analysis of the albumin-based bioplastic’s potential for use in the biomedical and food packaging fields.

As noted in the study, 4.5 hospital admissions out of every 100 in the U.S. in 2002 resulted in a hospital-acquired infection. In addition to the risk of contamination in hospitals, food contamination as a result of traditional plastics is a notable risk.

Researchers are encouraged by the antimicrobial properties of albumin-based bioplastics that could potentially reduce these risks through drug elution—loading the bioplastic with either drugs or food preservatives that can kill bacteria or prevent it from spreading.

The study, “Protein-based bioplastics and their antibacterial potential,” is available online at http://onlinelibrary.wiley.com/doi/10.1002/app.41931/abstract.