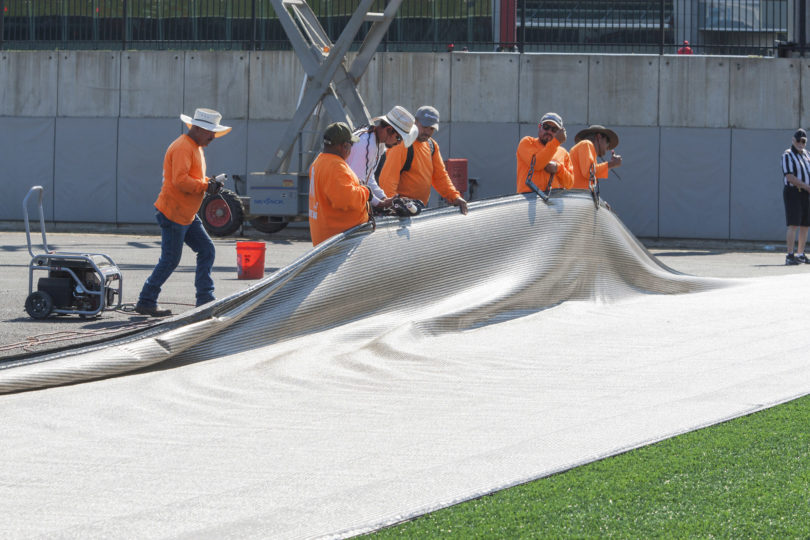 Workers put down part of a new turf at the Woodruff Practice Fields. The renovation project used more than 550 tons of recycled sand and rubber as infill materials.

As part of the universtiy’s effort to create a more sustainable campus, the UGA Athletic Association has renovated two of the Woodruff Practice Fields using reclaimed materials.

Part of the renovation project entailed removing the old fields and installing a new turf made up of plastic blades that mimic grass. After the layer of turf is installed, a mixture of sand and rubber materials is put down, making the field feel like a natural one, according to Derek Schuber, a project manager in the University Architects Office for Facilities Planning, who headed up the renovations.

“With this synthetic turf, we laid out the backing material with the grass fibers almost like a large carpet. Once that is in place the contractor uses a special infill consisting of a mixture of sand, rubber and cork,” Schuber said. “We’ve reclaimed the rubber infill material that was in the previous practice fields to use resources efficiently while installing the new turf.”

More than 550 tons of the recycled sand and rubber will fill in the field when the project is complete in May. The rubber comes from recycled tires, Schuber said. The amount of infill rubber installed is equivalent to about 30,000 to 35,000 vehicle tires.

The new turf material will help reduce the temperature at field level while also allowing for easier maintenance and drainage of the fields. The fields mainly are used by the university’s football team, but other athletic teams also use the facilities for training.

Also as part of the $3 million project, crews made upgrades to the wall along Smith Street, and standard athletic fencing was installed. Three permanent film towers, each at least 48 feet or taller, also were erected at the facilities, and workers made various landscape improvements to the area around the fields.

“We’re excited about the renovations to the two practice fields and the benefits that those changes will bring,” said Josh Brooks, associate athletic director for internal operations. “The new player-friendly turf will make a significant difference for our athletes. Along with the new playing surface, the new stone veneer wall, fencing and landscaping will greatly enhance the look of the Woodruff Practice Facility.”