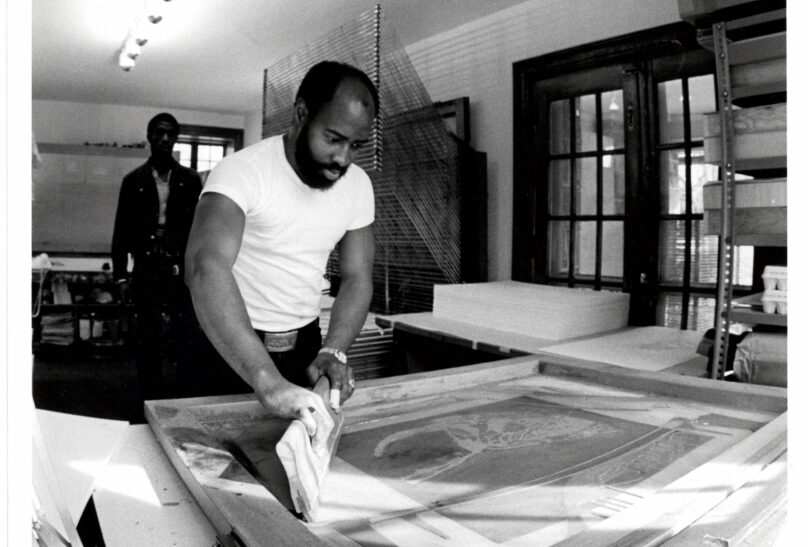 Since 1962, Lou Stovall has lived and worked in Washington, D.C., but his artistic journey will come full circle this year, with a return to his birthplace of Athens to receive the Larry D. and Brenda A. Thompson Award from the Georgia Museum of Art.

The museum presents this award annually to a living African American artist who has a strong connection to Georgia and has made significant but often lesser-known contributions to the visual arts tradition of the state. It is named for the couple who donated 100 works by African American artists from their collection to the museum and endowed a curatorial position there. Stovall will receive the award at the museum in April.

Stovall first encountered silkscreen printmaking at the age of 15, working at a grocery store. He was captivated by the practice and spent hours making prints, which eventually earned him a scholarship to the Rhode Island School of Design, where he studied before entering Howard University. As a student at Howard, he made posters for classmates and friends, lending his voice to matters both artistic and political. Early collaborators in these days included activist Stokely Carmichael and artists Sylvia Snowden and Lloyd McNeill.

After graduating, Stovall was inspired by many to give back to his community and teach young artists the craftsmanship he attained through continuous practice. He started Workshop Inc., which initially focused on community posters and evolved into a highly respected printmaking facility. Over the years, Stovall printed for many artists of international acclaim, such as Jacob Lawrence, Sam Gilliam, Elizabeth Catlett, Robert Mangold and Gene Davis. Alongside his collaborations, Stovall also made key innovations in the medium of silkscreen.

Stovall built a community of artists in Washington and extended his efforts to inspire artists all over the country. His own artistry was often overlooked until recent years, but now it has found its way into public and private collections around the world.

“When I first came to Athens, I immediately thought of Lou Stovall since I recalled that this was his birthplace. To finally honor an artist whose work and collaborations with other artists has inspired communities for so many decades, is an important aspect of the Thompson Award. We look forward to welcoming him back to his native Athens,” said Shawnya Harris, the museum’s Larry D. and Brenda A. Thompson Curator of African American and African Diasporic Art.

Harris is also organizing the exhibition “Lou Stovall: Of Land and Origins,” which will be on display at the museum Feb. 19 to May 29. It will include several silkscreens from Stovall’s 1974 series “Of the Land,” which form the basis of a book of art and poetry called “Of the Land: The Art and Poetry of Lou Stovall,” edited by Will Stovall and due to be published by the Georgetown University Press in 2022.