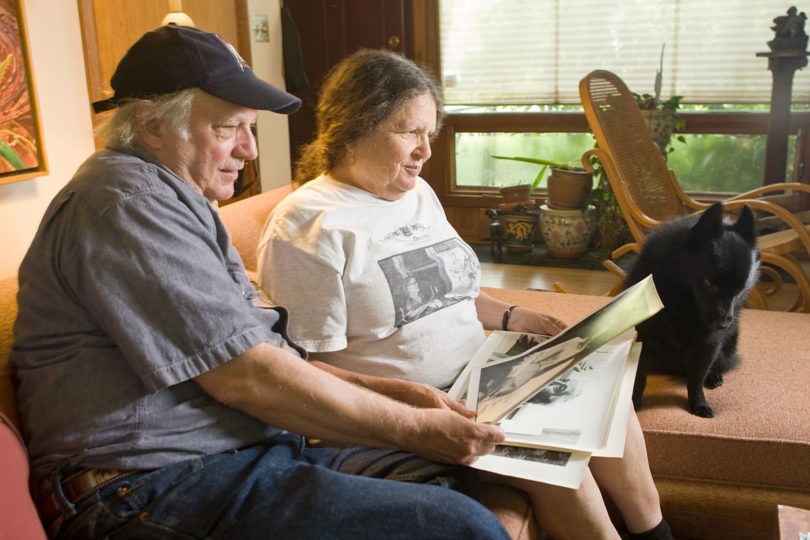 Art and Margo Rosenbaum looking through Margo's photos of folk artists. Many of her photos were used in the 96-page book that is packaged with the CD

It’s already been a record year for Art Rosenbaum.

The professor emeritus of art in UGA’s Lamar Dodd School of Art is among the nominees for a 2009 Grammy Award.

In addition to his work as a college professor, an artist and a musician, Rosenbaum is also an accomplished folk music ­documentarian.

“Art of Field Recording ­Volume I” is nominated in the best historical album category along with “Classic Columbia, OKeh and Vocalion: Lester Young with Count Basie (1936-1940)”; “Debate ’08: Taft and Bryan Campaign on the Edison Phonograph”; “Polk Miller and His Old South Quartette”; and “To Be Free: The Nina Simone Story.”

The album is also nominated for best liner notes, which are illustrated with Rosenbaum’s paintings and sketches along with photographs by his wife, Margo.

In the best album notes category, Rosenbaum is nominated in addition to Miles Davis’ “Kind of Blue: 50th Anniversary Collector’s Edition” with notes by Francis Davis.

The discs gather together recordings made by Rosenbaum starting with those he made in the 1950s while a student at Columbia University.

“The two volumes of the box set ‘Art of Field Recording’ are the most ambitious and extensive presentation of my field recordings,” Rosenbaum said. “I am also pleased that it expands, and makes more personal, the presentation with my commentary and a generous use of my drawings and paintings, and of Margo’s photographs.”

The album spans Rosenbaum’s career, drawing from a diverse range of influences.

“Over the years I recorded what interested me and moved me in the traditional music I encountered,” he said. “Not being a professional in academic folklore or the music business, I could follow my passions.

I could range through fiddle bands, blues, unaccompanied spiritual and gospel singing, without having to focus on either scholarly or market-driven projects.

“However on a few occasions I was recording for a specific release project—most was for personal and archival use and release came now and then as opportunity arose,” he also said.

For Georgia Strange, director of the art school, the nominations are a recognition of Rosenbaum’s talent.

“Art Rosenbaum continues to pursue his diverse passions as an artist, teacher, scholar and musician with a formidable drive that is tempered only by his gracious manner,” she said. “He is most worthy of national recognition for his visionary role in securing unique cultural treasure.”

Burkhard Bilger wrote in The New Yorker, “Art Rosenbaum is a folk revivalist of the old school. He believes that traditional ballads, blues, spirituals and fiddle tunes are among the glories of American culture.”