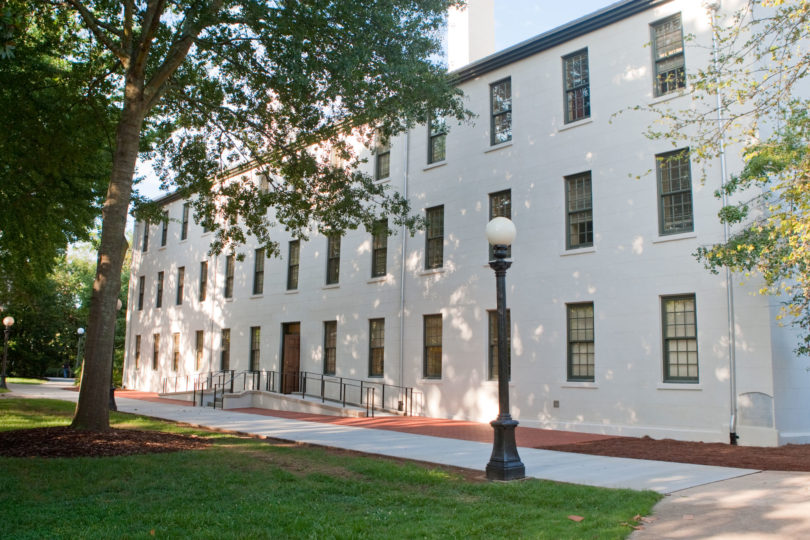 The renovation to New College included restoring the scored stucco on the exterior of the building and installing a historically appropriate standing-seam metal roof.

New College, one of the oldest buildings on the UGA campus, has recently undergone an extensive external and internal renovation and will be rededicated Aug. 17 at 2 p.m.

In addition to the administrative offices, the building will include a modern classroom, as part of an ongoing effort to return classroom space to historic North Campus.

“I am pleased that President Adams decided to place a classroom in this building,” said Provost Jere Morehead. “The Office of the Vice President for Instruction, among other units housed in New College, should be located in a place where courses are being taught.”

When New College was completed in 1823, it functioned as both a classroom and dormitory building. In 1830, it was destroyed by fire, leaving only the exterior walls. The facility was re-built in 1832 without the fourth floor that was part of the original structure, and for the next several decades it served as a multipurpose facility.

By the early 1900s, New ­College was the location of the College was the location of the School of Education. In the late 1930s, a general renovation took place that allowed the growing School of Pharmacy to occupy the facility. Most recently New College housed the Office of University Architects for Facilities Planning and the administrative offices of the Franklin College of Arts and Sciences.

The aesthetic goal of the recent renovation was to return New College to its 1875 appearance. This involved restoring the scored stucco on the exterior as well as the 9-over-9 window pattern and installing a historically appropriate standing-seam metal roof.

“The building had never really been fully renovated all at once,” said Scott Messer, historic preservationist in the Office of University Architects and project manager. “So when we began the project, taking it down to the structural floor system was the only option left.”

The project continued with the removal of the interior walls, leaving the external structure. The building was in need of renovation internally for many reasons, including overall functionality and the age of the structure.

Preservation principles have become a welcome and pervasive practice at UGA, according to Messer.

“This project was accomplished with the assistance of several funding sources, including multiple years of MRR support,” he said. “It’s great when a historic building like this gets the attention it needs. That means a lot to those who use the facility and those who care about the history behind it.”