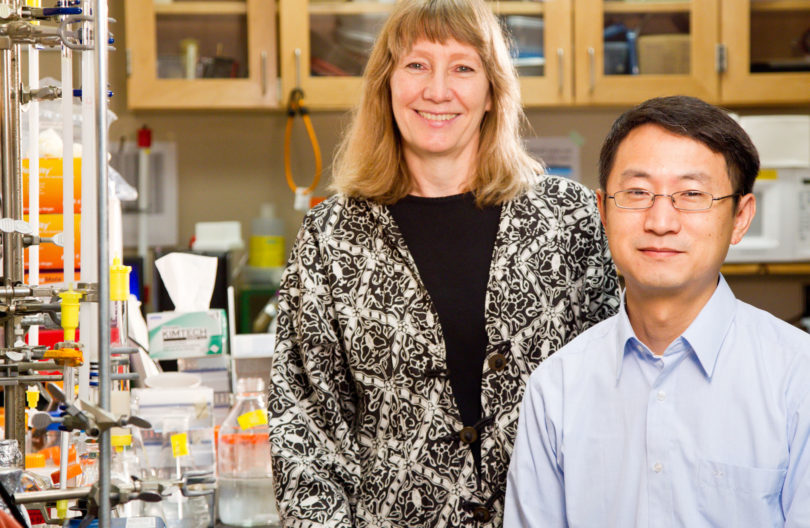 When Li Tan approached his colleagues at UGA with some unusual data he had collected, they initially seemed convinced that his experiment had become contaminated; what he was seeing simply didn’t make any sense.

Tan was examining some of the sugars, proteins and polymers that make up plant cell walls, which provide the structural support and protection that allow plants to grow. Yet his samples contained a mixture of sugars that should not be present in the same structure.

However, Tan was convinced that his samples were pure so he and Debra Mohnen, who heads the lab at the Complex Carbohydrate Research Center, met again to pore over the data.

They came to realize that there were hints in the data of a connection between two different types of cell wall glycans-or sugar-and a specific cell wall material known as arabinogalactan protein. This connection is not known to exist and does not conform to the commonly held scientific definitions of plant cell wall structure.

But Tan and Mohnen, who both work as part of the BioEnergy Science Center, one of three U.S. Department of Energy-funded research centers, were persistent, and they, along with an interdisciplinary team of chemists, molecular biologists and plant experts at UGA, began searching for answers.

“This is totally new,” said Tan, a research scientist in the CCRC and lead author of a paper detailing the group’s findings published in The Plant Cell. “We had never seen linkages between these structures before, and we had to develop a variety of new tests to prove that what we saw was not simply a mistake or a contamination.”

The scientific community generally agrees that complex sugars like pectin and xylan, which allow for cell wall structure, extension and growth, exist in separate networks from cell wall proteins. But the researchers have identified a direct and indisputable link between these two domains.

“What this means is that plant scientists’ view of the plant cell wall is at least partially wrong,” said Mohnen, professor of biochemistry and molecular biology and a member of the CCRC. “There have been hints over the last 30 or 40 years that this link might exist, but no one has been able to prove it until now.”

The discovery has many far-reaching implications beyond the ways it may change biology textbooks. As concerns about the reality of global climate change continue to rise, scientists are working to find useful alternatives to fossil fuel-derived energy.

Biofuels created from cultivated crops like trees and grasses show great promise as a carbon-neutral source of ethanol, but converting plants into fuel that might be used to power automobiles or create heat for homes has proven difficult. Millions of years of evolution have made plants resistant to breakdown, and the sugars needed for fermentation into ethanol are locked inside their complex cell walls.

But Tan and Mohnen are hopeful that their discovery combined with additional research will reveal many of the secrets of plant cell wall architecture and function, making them easier to break down or perhaps opening the doors for engineered plants that will work better as a feedstock for the biofuels industry and as better agricultural products.

“The applications that will emerge from this discovery are enormous,” Mohnen said. “It’s all going to stem from a refined understanding of how plants are put together and how they are made, but once we know that, we can start modifying them to make them perform in ways that are most advantageous to us.”