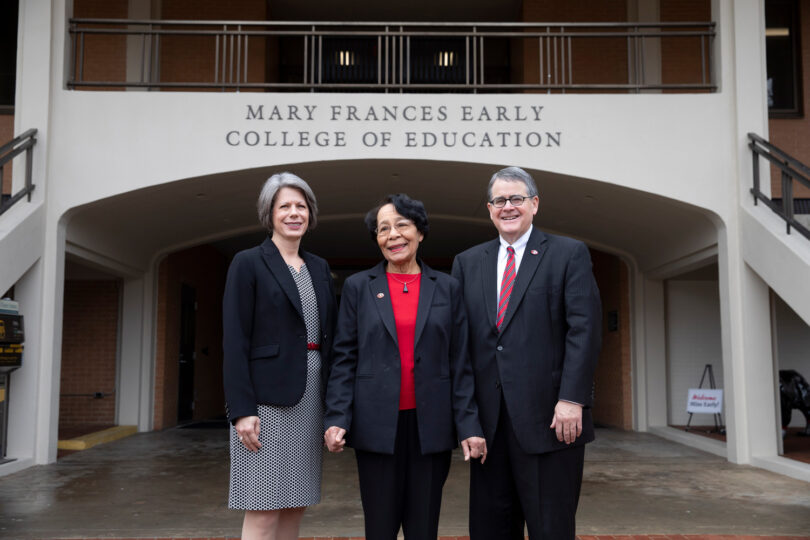 Each year, thousands of UGA students with exceptional financial need receive federal Pell Grants. Among those recipients, more than 1,000 report a family income less than the sum of UGA tuition and fees. For many students, that means they are personally responsible for covering every aspect of their college experience—housing, food, transportation, tuition, and more. Even after receiving HOPE or Zell Miller scholarships and the Pell Grant, students from the lowest income families still face a financial aid gap of $11,500 a year on average.

Removing barriers and opening doors to higher education was a top priority of the Commit to Georgia Campaign.

Donor support for scholarships during the campaign resulted in 1,030 new scholarship funds, and the total dollar amount of UGA Foundation

The Georgia Commitment Scholarship program is one of the most successful new initiatives at the university. It was built on the largest single gift ever given to UGA: $30 million from the Robert W. Woodruff Foundation in 2016. The UGA Foundation used that $30 million to match any donor’s gift of $50,000, $75,000, or $100,000 to establish an endowed undergraduate need-based scholarship.

Because the scholarships are endowed, they will be awarded year after year in perpetuity. Students who receive Georgia Commitment Scholarships are supported by special on-campus programming in partnership with the Division of Academic Enhancement. The match, the chance to help generations of students, and the unique opportunities the scholarship affords combine to make the program an unparalleled tool to remove barriers to higher education. 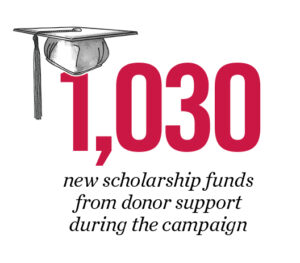 By June 2020, thanks to more than 340 individuals who supported the Georgia Commitment Scholarship, over $80 million was committed to need-based aid at the University of Georgia. Those scholarships are already changing lives.

“My scholarship was such amazing news,” says Mitzi Samano Leano, a dietetics major from Atlanta, Georgia Commitment Scholarship recipient, and first-generation student. “UGA was academically and socially where I wanted to pursue my education and reach my overall goals. My scholarship is the only thing keeping me here. Without it, I wouldn’t be able to pay for my education.”

In Spring 2020, 418 Georgia Commitment Scholarship students were enrolled at UGA, adding a diverse population of students from across Georgia: 62% were from outside metro Atlanta, and 39% were first-generation college students. Spring 2020 also saw the first Georgia Commitment Scholarship graduates enrolling in graduate school and beginning their careers.

The Georgia Commitment Scholarship program stands out as a bright light in the Commit to GeorgiaCampaign, but even in darker moments, UGA donors’ commitment to supporting students never wavered. When the novel coronavirus circled the globe and public health precautions required the suspension of normal business and activity, many students lost income, housing, and their ability to pay for the
education that brought them to Athens.

At the end of the day, we can’t control the uncontrollable, but what we can do is lean on each other and help in any way we can. And that is exactly what donors are doing. — Michael Gay, third year, management

UGA supporters responded by donating $282,000 in the four months after UGA closed to in-person education. As of August, President Jere W. Morehead JD ’80 and the UGA Foundation Board of Trustees have directed a total of $900,000 in private funds to these emergency needs.

“To the people who donate to this fund: Thank you,” says Michael Gay, a third-year management student from Rockmart. “You don’t understand how much of a relief it was to know that somebody had my back during these rough times. At the end of the day, we can’t control the uncontrollable, but what we can do is lean on each other and help in any way we can. And that is exactly what donors are doing. They inspire me to one day be able to give back to people like myself or someone in a position like mine.”

That sentiment is the same in good times and bad. Those who benefit from the generosity of others feel a call to pay it forward. Donor impact isn’t limited to the students whose lives are changed or even the families who see their children realize their dreams because of scholarships. Removing barriers and opening doors for students creates alumni who are eager to do the same for generations to come.

The thousands of scholarships created by the Commit to GeorgiaCampaign will empower not just students but also their families, their communities, and the university itself. Campaign donors are providing promising students with new opportunities to pursue their passions at UGA.

The Mary Frances Early College of Education Endowment was named in February to honor UGA’s first African American graduate. The fundraising initiative began in April 2019 and raised $3 million in one year. Those funds will provide scholarships and support diversity, equity, and inclusion efforts in the college and across UGA.

School of Public and International Affairs

Over two dozen donors came together to create the Loch and Leena Johnson Georgia Commitment Scholarship. Honoring Loch Johnson, University of Georgia Regents Professor Emeritus of Public and International Affairs, and his wife, Leena, the endowed scholarship supports undergraduates with financial need. In addition to this tribute, four additional Georgia Commitment Scholarships were established by SPIA donors during the campaign.

The College of Pharmacy received a $1 million gift from the Molly Blank Fund of the Arthur M. Blank Family Foundation in October 2017 to establish the Molly and Max Blank Student Enrichment Endowment. The endowment provides emergency funds, in perpetuity, to current and prospective pharmacy students experiencing hardships. To date, approximately 35 students have received support from this fund.

The School of Law raised nearly $30 million in new scholarship funds during the campaign. These funds have helped reduce annual law student borrowing by more than 33% since 2013, and today, roughly 40% of UGA law students obtain their legal educations debt-free. 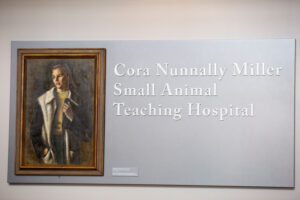 Cora Nunnally Miller (right), who anonymously donated more than $33 million to UGA over her lifetime, gave a gift of $17 million upon her death in 2015. That gift created, among other things, the Cora Nunnally Miller Fine Arts Scholarship Fund, which recognizes exceptional artistic talent, fosters interdisciplinary collaborations in the arts, promotes the arts on campus and beyond, and gives special opportunities to the students it supports. The first cohort of six first-year students was named in 2018.

The Larry Leroy Golden Memorial Scholarship, established by alumni of the Zeta Pi chapter of Alpha Phi Alpha Fraternity, was permanently endowed thanks to donations from over 200 campaign donors. This scholarship, which honors a 1976 Zeta Pi initiate who died weeks before his graduation, will support undergraduate students with financial need in perpetuity.

While still a student, Jack Bush BSME ’20 created the Bush Engineering Scholarship to help minority students with financial need who are majoring in engineering. Before he even graduated, Bush pledged to endow the scholarship as he begins his career in engineering.