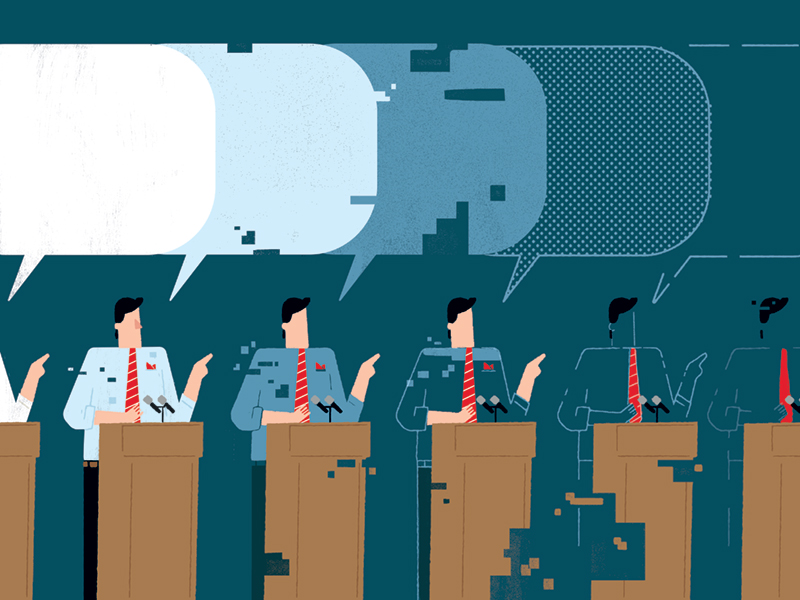 Research on storytelling has implications for marketing, speeches and more

A mainstay of the political campaign trail is the heartfelt, homespun anecdote. It helps politicians build rapport with voters and establish themselves as appealing and relatable.

But new research from the University of Georgia Terry College of Business suggests those well-traveled anecdotes could be sabotaging that quest for connection.

“We persistently found that people perceive otherwise identical performers or speakers to be less authentic after seeing them say the same thing twice,” Smith said. “We examined this effect across a set of contexts — an entrepreneur pitching a business idea, a politician telling a moving story about health care, a tour guide giving a tour, a comedian telling a funny story, and a job candidate answering interview questions. Each time, participants who witnessed the performers repeat themselves judged the speaker as less authentic.”

Their paper, “Twice-Told Tales: Self-Repetition Decreases Observer Assessments of Performer Authenticity,” was published in the Journal of Personality and Social Psychology earlier this year.

“This research fits into the broader question of how do people intuitively assess authenticity in consequential contexts such as business or politics,” Smith said.

Authenticity is a quality increasingly sought after by consumers and voters. Scholars have proposed several drivers behind this desire for authenticity, including the overexposure to marketing content and the increased general distrust in institutions. In turn, people place an increasingly high premium on “realness” and authenticity in their brands and politicians.

“Although we know that people often want their brands and leaders to be authentic, understanding how they assess and define this often complicated and multifaceted concept is a challenge,” said Smith.

Smith and Gershon examined one facet of the public’s search for authenticity by focusing on how people assess the authenticity of repeated performances such as speeches and anecdotes.

In their wide-ranging studies, Smith and Gershon asked participants to view different speakers: politicians giving stump speeches, entrepreneurs making elevator pitches, tour guides and others. In some instances, the speakers repeated the same stories, and in others, there was no repetition.

In each case, participants rated the speakers who repeated stories as less authentic. Intellectually, people know politicians and tour guides have to repeat themselves, but witnessing it left people with a negative impression, Smith said.

One key feature of their findings was that authenticity assessments can be in defiance of rational thinking. They found people perceived performers to be inauthentic even when they knew it was required or even preferable that the performers repeat themselves. For instance, although people objectively know politicians often repeat stump speeches and that the job of tour guides is to repeat their tours, witnessing a repeated performance still leads people to perceive the speaker as less authentic.

“This thinking appears to be driven by people tending to assume that social interactions are, by default, unique — even interactions we rationally know are repeated,” Smith said. “When you listen to a politician give a moving speech, it seems like you are having a unique interaction or connection. So, when I see a YouTube video of them saying the same thing later, it feels like they fooled me and hence, I see them as less authentic. The interaction was not the unique connection I thought it was.”

These effects are more relevant in an age where speeches and social interactions are recorded more often. Several performers instituted no-phone zones at their public events. Creating a stump speech or a great comedy show takes time and effort. The ease of recording leads performers vulnerable to losing their authenticity if well-crafted material is reproduced too soon on the internet. Although content repetition may even improve the performer’s ability, people seem to place a premium on authenticity at potentially the expense of other features of the performance, such as quality.

It is important to note this research tested the repetition of stories and speeches. Repeated PSAs or slogans, such as “Wash your hands for 20 seconds,” or taglines, such as Home Depot’s ‘Let’s do this,’ were not tested.

“I would guess slogans or taglines would be less likely to be affected by lower authenticity assessments. Those messages are more glaringly designed to be repeated and are often not as obviously attached to a specific individual so people may be less likely to feel deceived by a repetition of a slogan,” said Smith. “However, storytelling or social interactions seems to be an area that people are likely to demand at least the appearance of uniqueness and authenticity.”