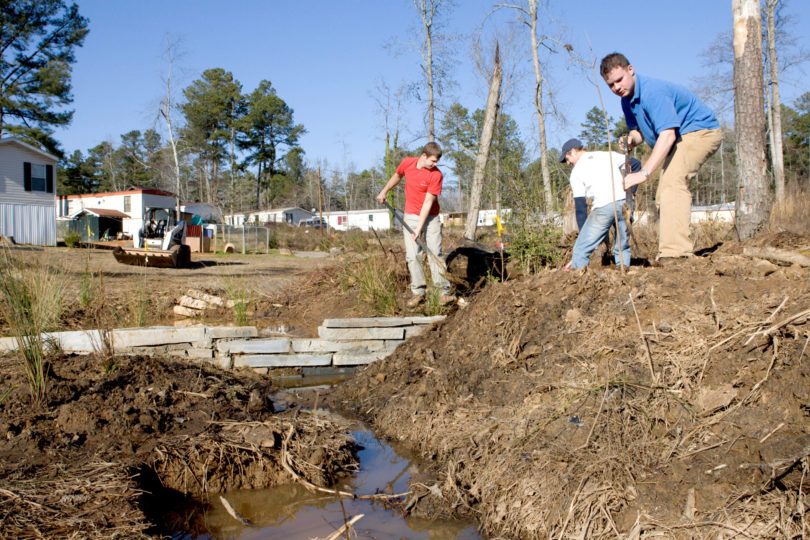 Around a year and a half ago, a pine beetle infestation destroyed the woods at Pinewood Estates North, home to 225 mostly Hispanic families in Athens.

The trees were hastily removed without much thought to how the land would look afterward, or what effect the removal might have to erosion. Debris was dumped in a ravine inside of the mobile home community.

“What was pine woods-that’s where the name came from-now looks like a clear-cut area,” says David Berle, assistant professor of residential landscape design in the horticulture department.

Last semester, Berle taught a special one-hour class devoted to special problems. Through grant money from the Georgia Forestry Commission, the class was able to plan a service-learning landscaping project to benefit Pinewood Estates North. While students could use the opportunity to learn basic Spanish appropriate to landscaping-90 percent of the horticulture workforce is Hispanic, according to Berle-they also could “put something back in the community.”

The origins of the Georgia Forestry Commission grant can be traced to March 2005. Then, Paul Duncan, program coordinator for the Center for Latin American and Caribbean Studies, matched money from the President’s Venture Fund with a grant from the Atlanta-based Exposition Foundation to create an ethnobotanical garden at Fowler Drive Elementary School. The students’ garden currently boasts
12 irrigated raised beds of cool-weather crops like broccoli, collard greens and cabbage; when students return in August, more perennials for the “world garden,” as Duncan calls it, will be planted. The school garden project fulfills a need for outdoor environment education, as requested by Fowler teachers, and makes practical use of UGA’s Latin American Ethnobotanical Garden for environmental and cultural outreach in the community, according to Duncan.

Many Fowler Drive students live in the Pinewood Estates North ­community, so it made sense to continue that environmental education with their parents, reaching further out in the community. Barbara Payne, a program assistant for Landscapes for Learning, a new service-learning initiative based in the College of Environment and Design, was instrumental in securing the Georgia Forestry Commission grant, which helps cover both the Fowler Drive project and Berle’s recent landscaping project.

Students not only learned helpful phrases in Spanish like “Bring the shovel over here, or put the plant down there,” they also gained an appreciation for another culture, according to Berle.

Students divided into groups and knocked on every door, asking residents in Spanish where they’d like their trees. One Pinewood woman prepared lunch for the students both days, exposing them to authentic Mexican cuisine.

“They were truly right in the community, eating lunch and knocking on doors,” Berle says. Most of the students are from wealthier backgrounds than the Pinewoods residents, he also says.

“The majority of the students-I feel like this changed them a little bit,” he says.