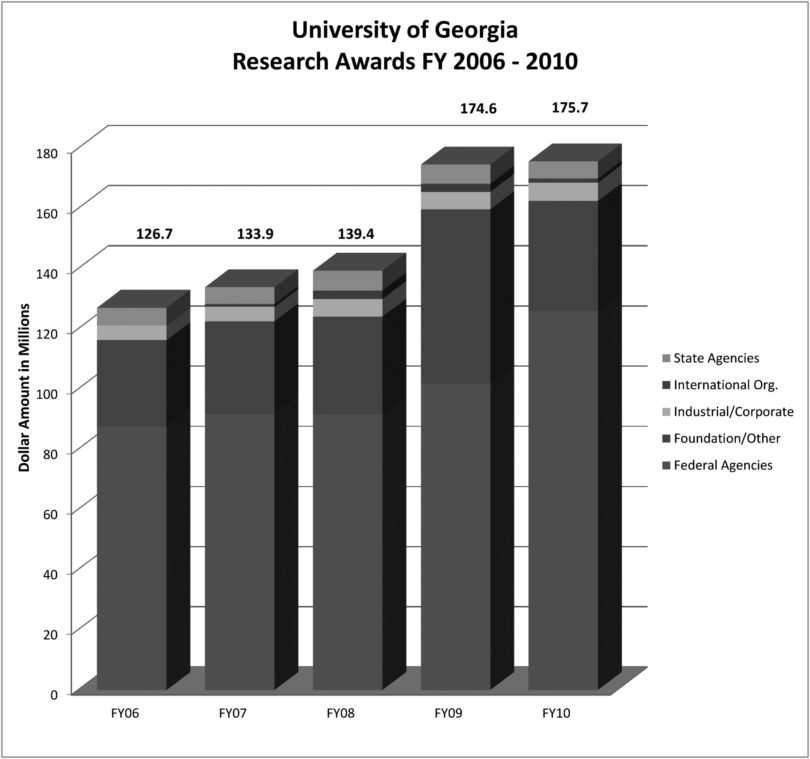 “Building UGA’s research enterprise to the level of a leading national research university continues to be a major goal,” said David Lee, vice president for research. “We’ve still got a ways to go, but this is concrete affirmation that we’re on the right track.

“Having another record year, despite the tough economic and budgetary circumstances, is a tribute first and foremost to our faculty since they write the proposals and perform the research,” he added. “But we are also deeply grateful to the many unsung heroes across the UGA campus whose efforts behind the scenes are indispensable. Everyone has redoubled their efforts to achieve this level of success.”

Last year’s peak, $174.6 million, represented a significant jump from the previous high of $150.6 million in fiscal year 2005. UGA continues to rank among the top 100 public and private research universities for federal research and development expenditures, placing 97th in the most recent NSF rankings, which are based on figures from fiscal year 2008.

“It’s not been easy to make this progress, since UGA-unlike virtually all other major state universities-lacks the comprehensive engineering and medical programs that are major drivers of research,” said Lee.

Sponsored research funding stems from contracts and grants awarded to the university primarily by federal, state or local government agencies; state, national or international private foundations; or individual donors from Georgia and elsewhere.

“I continue to be impressed with how broad based our research funding is,” said Lee.

UGA faculty received awards from almost 30 federal agencies, ranging from the U.S. Centers for Disease Control and Prevention to the National Endowment for the Humanities.

“Currently we have grants to support the translation of historically important literature as well as research to cure important diseases,” he said. “These and a host of other scholarly activities, including some that are not supported by external funding, are equally important at a university that aspires to be a leader.”

Almost $24 million of the research total was federal stimulus funding competitively awarded to UGA researchers, offsetting declines in awards from foundations, international organizations and state agencies. Stimulus awards received in the areas of biomedical research, as well as environmental and physical sciences, were made for new research projects, new scientific equipment, extensions to existing projects and funding for summer research experiences for high school students, college students and teachers. UGA has received more than $40 million in stimulus funding since the law was enacted in February 2009.

Examples of fiscal year 2010 research awards include:
• $700,000 from the National Science Foundation to the Biomedical Health Sciences Institute to create a new Professional Science Master’s program in biomanufacturing and bioprocessing program that will help meet the workforce needs of Georgia’s growing biotechnology industry.
• $2.4 million from the Gordon and Betty Moore Foundation to an international team led by researchers in UGA’s department of marine sciences to investigate organic matter and nutrients flowing from the Amazon River into the adjacent Atlantic Ocean. The research will help show how climate-influenced phenomena, including natural disasters like floods and drought, might affect climate change.