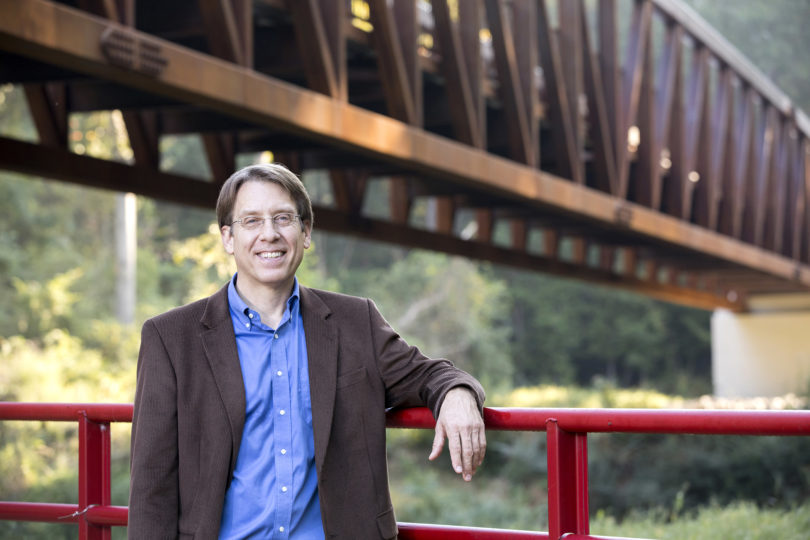 Modern sustainability practices often encourage resource and energy efficiencies across separate sectors, such as food production or biofuels, but this siloed approach could actually lead to ongoing environmental decay, according to a recent commentary by researchers in the University of Georgia College of Engineering.

Using new technology to improve efficiency, in particular, may accelerate this environmental decay by creating more products at cheaper prices. The materials and energy “saved” are not actually preserved but diverted to other uses, the authors wrote in a paper published recently in Nature Sustainability.

“Sustainability requires humans to choose to do less with less,” said lead author John Schramski, an associate professor in the College of Engineering. Schramski and colleagues were invited to write the commentary for the journal.

“We try to balance materials such as nitrogen or water, which are technically renewable, but the preponderance of energy is not,” he said. “Once energy is burned, it’s gone. We’ll never get biomass or fossil fuels back.”

Schramski, Brock Woodson of the College of Engineering and James Brown of the University of New Mexico have been exploring the issues associated with energy balance in ecosystems and industries and how energy use by civilization continues to skyrocket.

“One reason we fail to comprehend the gravity of these circumstances is that few really understand the fundamental concept of energy,” they wrote in the commentary. Energy science focuses on quality, quantity and source, yet all energy use of any kind continues to change the environment, whether from renewable or nonrenewable fuels.

“When typical sustainability science says a new process is designed with 20% less fuel, all that’s really doing is making those resources available for someone else,” Schramski said.

In reality, reducing consumption of forest resources, for instance, doesn’t mean that the forest will never be used again. Instead, the forest will be deferred for another use at a later date, he said. Ultimately, in a closed system, no mechanical or environmental system can indefinitely withstand this type of exponentially rising activity.

“Everything we do costs energy, and we don’t have infinite supplies of it,” Woodson said. “We know this from our daily lives, when we wake up hungry and have run out of our personal fuel reserves.”

Even as early as the mid-1800s, English economist William Stanley Jevons showed that an improvement of efficiency in engineering design often leads to increased energy and resource consumption rather than a decrease. Innovations allow technology to be more profitable, and lower prices lead to increased demand, as well as a more rapid depletion of resources.

“Scientists are looking for better ways to explain the relationship between technology and energy,” Schramski said. “Technology’s energy needs are a forcing function on the environment.”

In the paper, the authors pointed to food systems, meat and biofuels as examples of the “complex and sometimes counterintuitive” challenges that lie ahead for sustainability initiatives. Food production, for instance, has become increasingly complex over time. Hunter-gatherer societies used a small amount of Earth’s biomass to meet their biological needs, which progressed as agricultural and industrial societies used more processes to obtain and distribute food.

“Most folks today don’t realize how much energy goes into the food system. It’s an awareness issue, and when people learn more, they can make better choices,” Woodson said. “Although this won’t stop in one generation, we can begin to make this discussion part of our cultural decision-making.”

In today’s contemporary civilization, about 15%-30% of all energy consumption is used for the global food system for machinery, fertilizers, pesticides, irrigation systems, harvesting, transportation, storage, marketing and preparation. This includes smaller gardens and pastures up through industrial agriculture and marine fisheries, the authors wrote.

Humans need about 2,000-2,400 calories per day. To meet this need, based on 2013 data, the authors calculated, a global population with 7 billion people harvest about four times the plant energy needed for every downstream unit of food energy on the dinner table. Meat is the largest contributor to this inefficiency requiring about 60% of these harvested plant energies to produce only 20% of the final calories consumed.

Biofuels calculations show a similar result. Double the plant energy is harvested for every downstream unit of ethanol and biodiesel energy, the authors wrote. Ironically, the authors point out that equal amounts of fossil fuels are used to distil liquid biofuels from plants, and liquid biofuels represent only about 2.6% of the petroleum used for global transportation. “These are ridiculously inefficient numbers,” Schramski said.

“From this perspective, reducing meat and liquid biofuel consumption offers a remarkably clear improvement,” the authors wrote. “Obviously, we recognize the enormity of the socioeconomic, behavioral and nutritional complexities and challenges associated with these paths forward.”

However, a sustainable future without a substantial reduction in energy use isn’t possible, they added. When Schramski presents this type of data publicly, he often shows images of the Earth from space at night, where lights glow brightly in major cities.

“The reality is those lights are a controlled explosion,” he often tells audiences. “The planet is smoldering.”

The current devastating coronavirus pandemic provides a short-term glimpse into what is possible. With hundreds of countries across the planet locked down under shelter-in-place orders, humans are staying at home, limiting travel and considering their resources more consciously.

“We can’t keep up at this level, but with some small modifications to our lifestyles, we can cut a significant amount of energy use,” Woodson said. “Even allowing employees to work at home one or two days per week could have an impact. We’ll see what happens as the economy comes back.”