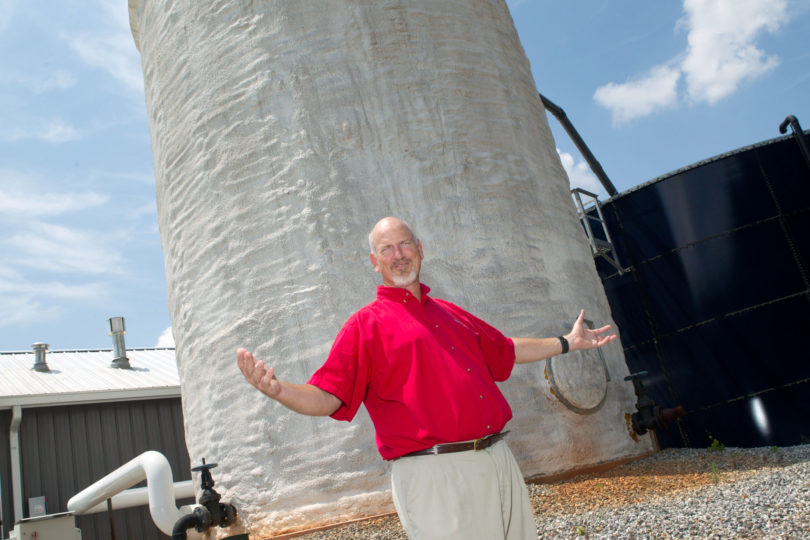 There are a few conversational topics that are best not mentioned around the dinner table in some households: religion, politics and climate change.

Mark Risse, crop and soil sciences extension and research engineer, won’t touch the first two with a 10-foot pole— but there’s something about the third one that he just can’t leave alone.

“Nobody wants to go out and tell people things that they don’t want to hear,” Risse said. “But I researched (climate change) to the point that I started to have personal concerns about how these (agricultural) systems are going to survive in a changing climate. I think it’s an important enough issue that we need to do something.”

Risse is part of a U.S. Department of Agriculture-funded effort to help farmers prepare for the kinds of severe weather or weather pattern changes that may affect their farms in the near future.

Risse has spent his career helping farmers mitigate the environmental impact of their farms and can point to strides that have been made in just the past few years making traditional farms more sustainable. Now his concern is how the environment may be affecting those farmers.

After graduate school he joined the UGA faculty as the state extension specialist for agricultural pollution prevention. He developed programs to help farmers minimize the nutrient runoff and soil erosion, and to conserve soil and water resources.

He later became a professor in the College of Agricultural and Environmental Sciences’ agricultural and biological engineering department, where he taught special topic and practicum graduate courses.

In 2006, he was named the Georgia Power Professor of Water Policy and began working under an adjunct appointment for the Carl Vinson Institute of Government.

He now works in the department of crop and soil sciences under a 25 percent research and 75 percent outreach appointment. In July, he was appointed an adjunct professor in the College of Engineering.

In addition to developing several novel technologies to manage manure and chicken litter, he also founded the National Livestock and Poultry Environmental Learning Center, a clearinghouse of information for farmers on ways to increase the efficiency and sustainability of animal farms.

Over the past two years, however, Risse’s outreach work has led him to look at the impacts that climate change is having or could have on how food is grown and at the links between agriculture and climate change.

Last summer, he joined a team of extension scientists across the country working under a $4.1 million grant to help farmers get ready for climate change and mitigate the impact they are having on the climate.

“USDA awarded us this grant because they knew we were able to get information into the hands of farmers,” Risse said.

Risse has traveled around the country presenting workshops about adjusting to climate change.

“What we try to focus on is dealing with things like drought, and dealing with high temperatures and how we are going to help producers deal with the weather, whatever that weather might be,” he said.

Farmers have seen the adverse effects that weather can have on their livelihoods and welcome whatever tactics they can find to help manage that risk.

“If the climate’s going to change, and we can’t control those changes, then we had better do our best at trying to predict those changes and help the producers adapt to those changes,” he said. “Farmers are very versatile and always have had to deal with the weather. If we can give them a heads up to some of the things that they will need to adapt to, I think that they will adapt and develop improved systems.”