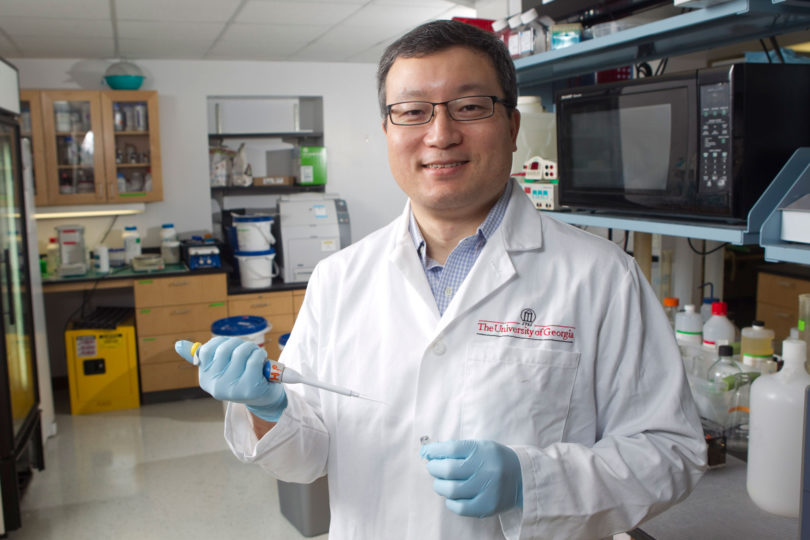 New technology could become available to consumers within a decade

Athens, Ga. – Flu is unpredictable. Influenza viruses are constantly changing—from one season to the next or even within the course of a flu season—making vaccine development difficult.

Annual flu vaccines are designed to build immunity to the three most common strains of the virus predicted to be circulating that year. New research from the University of Georgia recently published in the Journal of Virology suggests an improvement to the current model.

“Influenza viruses change their surface proteins for various reasons and by various means. As a result, we need annual vaccination to match the circulating strains,” said the study’s lead author Biao He, a professor of infectious diseases in the UGA College of Veterinary Medicine.

Current flu vaccines target surface proteins to develop resistance. He’s vaccine targets an internal viral protein, called a nucleoprotein, which is critical for virus replication. Because it doesn’t change as readily as the surface proteins, it’s a great target for a vaccine, He said.

Previous attempts to target nucleoprotein for protection were not effective. Using a vector process developed in He’s lab that uses the common canine virus parainfluenza virus 5, or PIV5, his research showed for the first time that a single dose of immunization protected a mouse model against both H1N1 and H5N1, two different subtypes of influenza A virus. PIV5 is a virus that causes respiratory infection in dogs. Using PIV5 as a delivery mechanism to expose humans and other animals to antigens of important pathogens—influenza in this case—allows them to create vaccines that will protect against future infections in humans and animals.

“This finding suggests flu vaccines can protect against multiple strains, thus fewer flu vaccinations will be necessary,” said He, who also is a Georgia Research Alliance distinguished investigator and member of the Faculty of Infectious Diseases.

Current vaccines use weakened or dead flu viruses grown in eggs to build antibodies in people. Some vaccine strains grown in eggs, like the H3N2 virus, don’t grow well, so it is difficult to produce an effective vaccine in a quantity needed. The virus used as a vector in He’s vaccine, PIV5, has been used as a component for kennel cough vaccines and is already being mass produced from cell cultures, avoiding dependence on eggs for vaccine production.

“We are looking forward to further testing this novel vaccine and moving it to human clinical trial as soon as possible,” He said.

He’s lab also is working on vaccines for HIV, tuberculosis and malaria using this technology.

UGA College of Veterinary Medicine
The UGA College of Veterinary Medicine, founded in 1946, is dedicated to training future veterinarians, conducting research related to animal and human diseases and providing veterinary services for animals and their owners. Research efforts are aimed at enhancing the quality of life for animals and people, improving the productivity of poultry and livestock and preserving a healthy interface between wildlife and people in the environment they share. The college enrolls 102 students each fall out of more than 800 who apply. For more information, see www.vet.uga.edu.