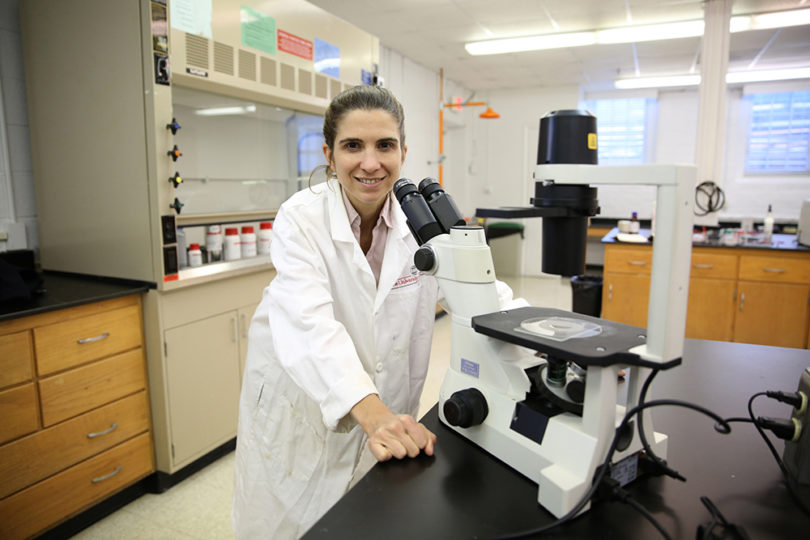 Emily Noble was the lead author on the research paper. (Photo by Cal Powell)

You’re on a diet, but the aroma of popcorn in the movie theater lobby triggers a seemingly irresistible craving.

Within seconds, you’ve ordered a tub of the stuff and have eaten several handfuls.

Impulsivity, or responding without thinking about the consequences of an action, has been linked to excessive food intake, binge eating, weight gain and obesity, along with several psychiatric disorders including drug addiction and excessive gambling.

A team of researchers that includes a faculty member at the University of Georgia has now identified a specific circuit in the brain that alters food impulsivity, creating the possibility scientists can someday develop therapeutics to address overeating.

The team’s findings were published recently in the journal Nature Communications.

“There’s underlying physiology in your brain that is regulating your capacity to say no to (impulsive eating),” said Emily Noble, an assistant professor in the UGA College of Family and Consumer Sciences who served as lead author on the paper. “In experimental models, you can activate that circuitry and get a specific behavioral response.”

Using a rat model, researchers focused on a subset of brain cells that produce a type of transmitter in the hypothalamus called melanin concentrating hormone (MCH).

While previous research has shown that elevating MCH levels in the brain can increase food intake, this study is the first to show that MCH also plays a role in impulsive behavior, Noble said.

“We found that when we activate the cells in the brain that produce MCH, animals become more impulsive in their behavior around food,” Noble said.

To test impulsivity, researchers trained rats to press a lever to receive a “delicious, high-fat, high-sugar” pellet, Noble said. However, the rat had to wait 20 seconds between lever presses. If the rat pressed the lever too soon, it had to wait an additional 20 seconds.

Researchers then used advanced techniques to activate a specific MCH neural pathway from the hypothalamus to the hippocampus, a part of the brain involved with learning and memory function.

Results indicated MCH doesn’t affect how much the animals liked the food or how hard they were willing to work for the food. Rather, the circuit acted on the animals’ inhibitory control, or their ability to stop themselves from trying to get the food.“Activating this specific pathway of MCH neurons increased impulsive behavior without affecting normal eating for caloric need or motivation to consume delicious food,” Noble said. “Understanding that this circuit, which selectively affects food impulsivity, exists opens the door to the possibility that one day we might be able to develop therapeutics for overeating that help people stick to a diet without reducing normal appetite or making delicious foods less delicious.”

The paper, “Hypothalamus-hippocampus circuitry regulates impulsivity via melanin-concentrating hormone,” was published in the Oct. 29 issue of Nature Communications.