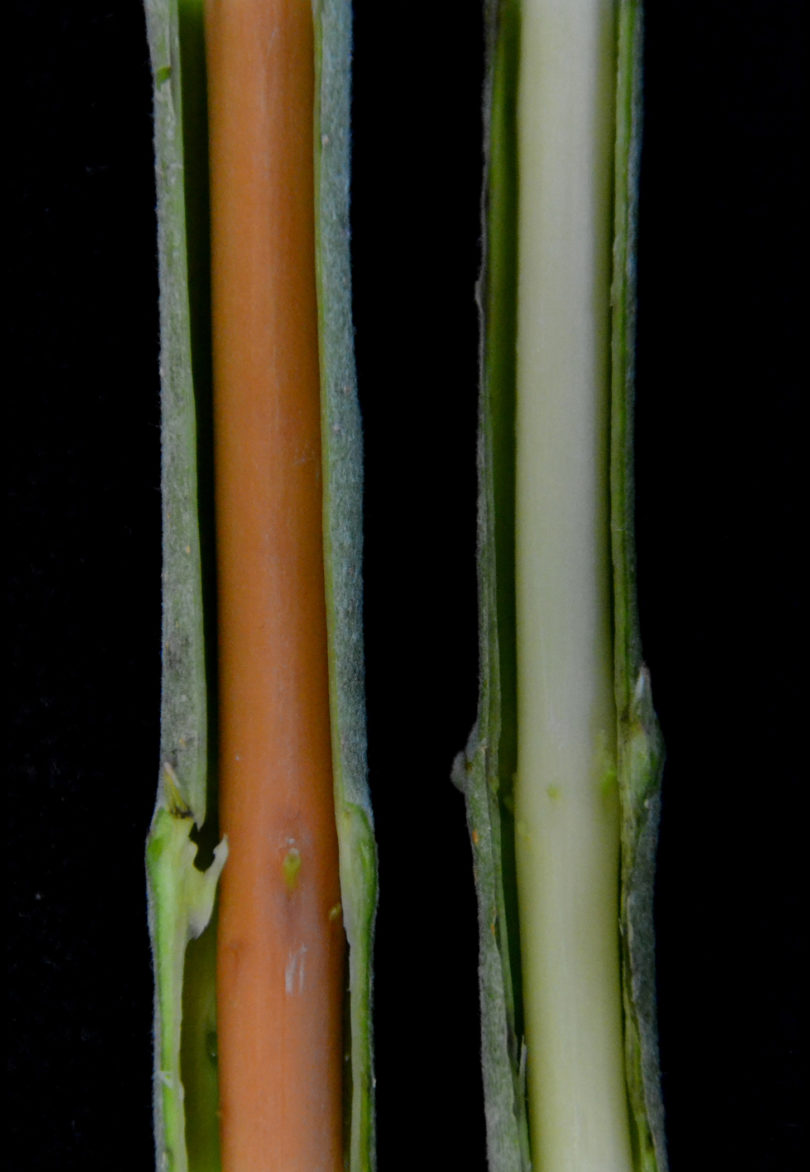 Poplar plants produced from a lignin-gene-targeting experiment in C.J. Tsai's lab had red-colored wood. Red stem is a known side effect of lignin modification

Athens, Ga. – Researchers at the University of Georgia have used a gene editing tool known as CRISPR/Cas to modify the genome of a tree species for the first time. Their research, published recently in the early online edition of the journal New Phytologist, opens the door to more rapid and reliable gene editing of plants.

By mutating specific genes in Populus—a genus of deciduous trees that includes poplar, aspen and cottonwood—the researchers reduced the concentrations of two naturally occurring plant polymers. One is called lignin, which traps sugars and starches used for biofuel production inside the tree’s sturdy cell walls. The other is known as condensed tannin, and its presence in leaves and barks of the tree deters feeding by ruminants, such as deer, cattle, goats and sheep.

“CRISPR is a relatively new technology, but it could improve our ability to produce novel varieties of food crops, animal feeds and biofuel feedstocks,” said the study’s lead researcher C.J. Tsai, a Georgia Research Alliance Eminent Scholar in UGA’s Warnell School of Forestry and Natural Resources and department of genetics. “Compared to some other gene editing techniques, this is incredibly simple, cost-effective and highly efficient, and it could serve as the foundation for a new era of discovery in plant genetics.”

CRISPR technology is derived from a defense mechanism evolved by bacteria and other single-celled organisms. When a bacterium is attacked by an invader like a virus, it captures some of the virus’s DNA, chops it up into pieces and incorporates a segment of the viral DNA into its own genome.

As the bacterium experiences more threats, it accumulates a bank of past infections in a special part of its genetic code called CRISPRs—short for clustered regularly interspaced short palindromic repeats—which act as a kind of immune system to protect against future invasions.

“This is a mechanism that evolved naturally, but we can borrow the bacteria’s gene-cutting abilities and use it to edit very specific genes in all kinds of organisms, including plants and animals,” said Tsai, who is also director of UGA’s Plant Center. “It’s like using a pair of scissors with GPS tracking to locate and snip out tiny bits of DNA—enough to nullify the gene you don’t want, while leaving everything else unchanged.”

“Tom was a student in my class a few years back, and we were testing some of the gene silencing systems he developed for soybean in poplars,” Tsai said. “It was a side project, also involving Xiaohong Zhou, a visiting doctoral student from Nanjing Forestry University, to test the new CRISPR system, and its high efficiency exceeded all of our expectations.”

Every single poplar plant Zhou produced from the lignin-gene-targeting experiment had red-colored wood. Red stem is a known side effect of lignin modification found in natural mutants of maize, sorghum and pine, Tsai explained, so the researchers knew the CRISPR system worked when they saw the telltale red stems on their Populus plants.

“I was blown away by the results,” Jacobs said. “This is one of the highest efficiencies ever reported, even in mouse and other animal models where the technology has been more extensively tested.”

“We thought we knew what genes control lignin and condensed tannin production, and we did target the right genes, but the work showed us that there are other genes with overlapping roles,” Tsai said. “The CRISPR system can now guide researchers seeking to identify these previously unknown gene family members.”

The article on “Exploiting SNPs for biallelic CRISPR mutations in the outcrossing woody perennial Populus reveals 4-coumarate:CoA ligase specificity and redundancy” is available online at http://onlinelibrary.wiley.com/doi/10.1111/nph.13470/abstract.