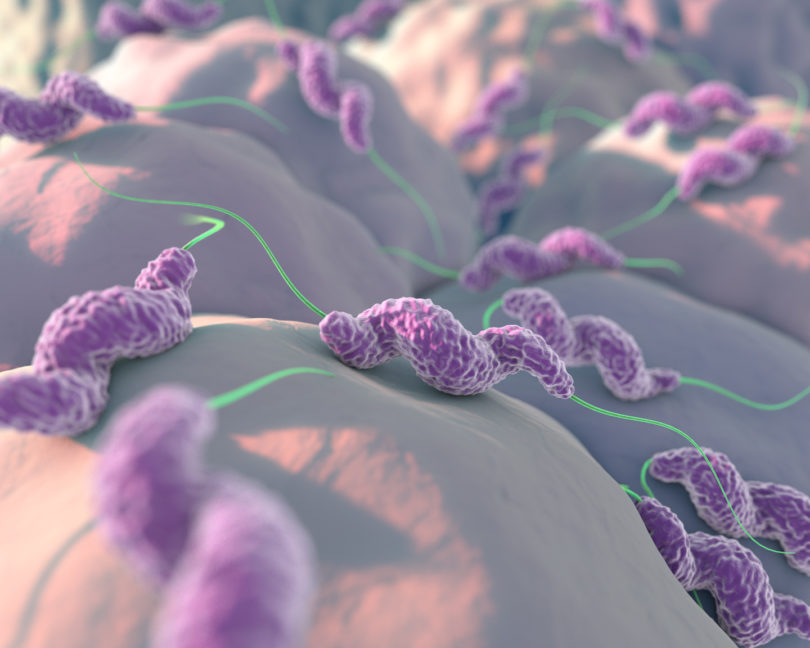 Campylobacter is the most common cause of bacterial food poisoning in the world according to the World Health Organization, and with over a million people in the U.S. infected every year, it’s not surprising that there is a need to understand why this spiral-shaped microbe causes disease.

The bacterium lives naturally in the guts of poultry and cattle—with no effect on them. However, when it enters the human body it causes debilitating diarrhea and severe abdominal cramping.

To help protect humans from these bacteria, the U.S. Navy Medical Research Center and the Johns Hopkins University Bloomberg School of Public Health recruited citizen volunteers to test new therapies that may prevent infection. These brave volunteers signed up to drink Campylobacter bacteria in the clinic so doctors and researchers can determine the effectiveness of their therapies.

A University of Georgia team led by Stephen Trent, a professor of infectious disease in UGA’s College of Veterinary Medicine, took those studies a step further. Instead of examining the infected humans, Trent’s lab examined the bacteria in the infectious samples produced by the volunteers.

“These bacteria can have far-reaching effects on the population, so it is vital that we understand why it acts the way it does in humans,” said Trent.

Understanding how infectious bacteria adapt inside humans can reveal the tools the bacteria use to survive, and those tools can then be targeted with new therapeutics in the future to kill the bacteria.

The team identified many genes Campylobacter relied on to adapt and survive in human hosts. These genes enable the bacteria to evade the immune response, for example, or help them find valuable nutrients to grow inside humans.

“Campylobacter infections in young children, which can be persistent, are associated with stunted growth periods that can lead to physical and cognitive impairments,” said Alex Crofts, lead author of the study and a doctoral student in Trent’s lab.

Now the team hopes to build on these initial discoveries, which were published in the journal Nature Microbiology (https://www.nature.com/articles/s41564-018-0133-7), to design new therapies to treat or prevent Campylobacter infections.