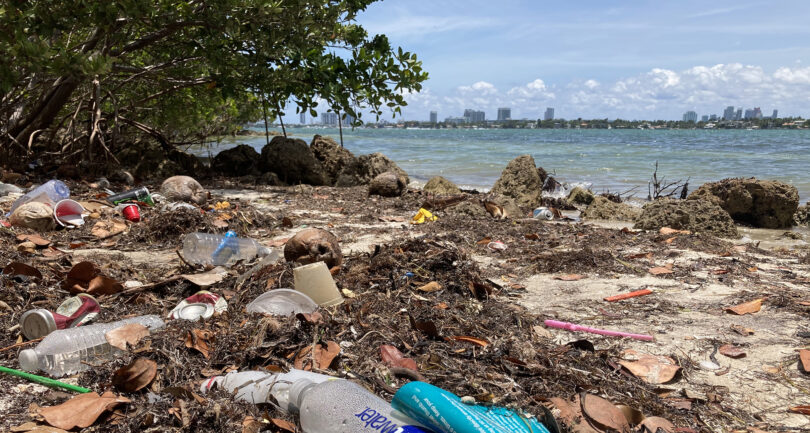 Plastic and other garbage litters the beach on Pace Picnic Island in Miami. (Submitted photo)

While the Bulldogs prepare for their much-anticipated game against the No. 2-ranked Michigan Wolverines in the Orange Bowl College Football Playoff Semifinal, a team of University of Georgia researchers is already hard at work in Miami to help leaders there tackle a problem that affects nearly every city in the world: plastic pollution.

Jenna Jambeck, an environmental engineering professor in UGA’s College of Engineering, and her students have partnered with Ocean Conservancy, a nonprofit environmental advocacy group, and the City of Miami to better understand the life cycle of plastic pollution and, more importantly, what steps must be taken to keep the Magic City and its famous waterways pristine.

To do this, Jambeck and her students, in collaboration with local partners like Florida International University students, conducted a community-level analysis of the origins and fate of plastic waste, particularly single-use plastics like bottles or food packaging, using what is known as the Circularity Assessment Protocol, or CAP.

“The Miami CAP can give us the knowledge we need to help preserve and protect the economic and cultural powerhouse that is our ocean,” said Jon Paul “J.P.” Brooker, director of Florida Conservation at Ocean Conservancy. “With it, we can work with champions on the City Commission to develop landmark regulations that will keep that debris out of the Magic City’s water. Florida’s marine environment is at a crossroads and we need all hands on deck to save the iconic waters that we as Floridians love.”

The project, which builds upon Ocean Conservancy’s Shores Forward initiative, will culminate in a comprehensive report that will be released in January.

“While it’s important that we accurately record plastic and other litter that we see on the ground or in the water, the CAP involves several other key components,” said Jambeck, who led a landmark study published in Science in 2015 that estimated 8 million metric tons of plastic enters the ocean every year.

“For example, we go to local stores to see what kinds of products are most frequently sold and how they are packaged, we examine waste management practices, and we work closely with members of the community to better understand local attitudes about conservation and pollution,” Jambeck said. “The entire process is in collaboration with local partners and the city or community to highlight strengths and recommend actions to increase circularity and keep plastics out of the environment.”

Since its development in 2019, Jambeck’s group has used the CAP in 10 countries and 27 cities around the world, including in India, Bangladesh, Vietnam, the Philippines, Panama and Mexico. But this is the first time the protocol has been fully deployed in a major U.S. city.

As the name implies, the project is designed to increase circularity in the way products are manufactured and used. Unlike a linear model where products are created, used for a very short time and discarded, a circular model emphasizes reuse, remanufactured or recycled materials.

As part of the analysis, researchers use a free app called Debris Tracker, which Jambeck created with fellow UGA engineering professor Kyle Johnsen. Used by both professionals and citizen scientists, the open-data app allows users to track plastic and other pollution using a smartphone. To date, Debris Tracker users have logged more than 5 million items around the world.

Jambeck’s research group and thousands of community members used the app earlier this year to log more than 75,000 pieces of trash throughout the Mississippi River Basin as part of a project to reduce waste along America’s most essential inland waterway.

“The data we gather using the Debris Tracker app helps us understand what type of litter ends up in the environment and how it got there,” said Taylor Maddalene, a doctoral student in UGA’s College of Engineering and the CAP director. “When we analyze litter alongside other elements of the CAP, we’re able to provide science-backed data that can ultimately inform decision making at the city level to improve water quality and reduce pollution.”

The report detailing results from the CAP will be made available in English, Haitian Creole and Spanish. Ocean Conservancy will work closely with community groups and citizens across Miami’s diverse neighborhoods to help develop action plans and to support community engagement.

Those living in Miami who would like to assist in the research can find more information online.