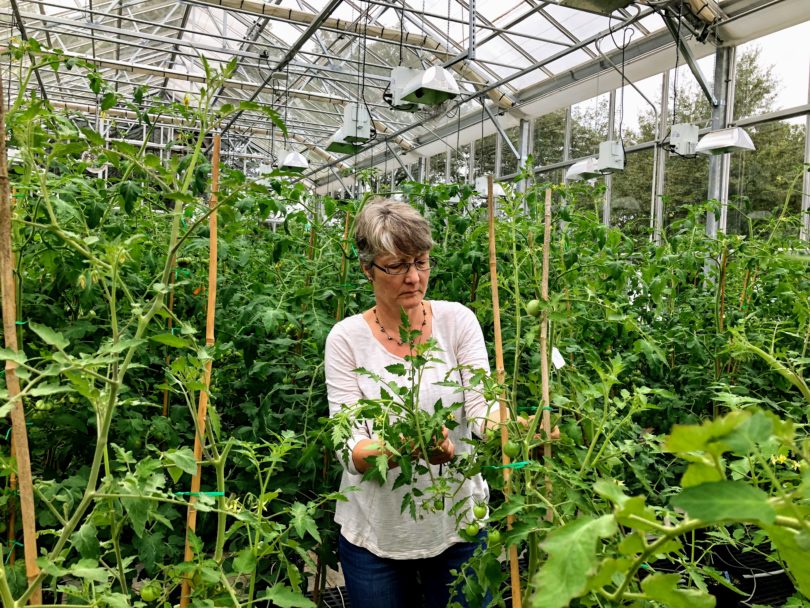 Esther van der Knapp in a greenhouse at UGA.

It’s almost summer, and Georgia gardeners are eagerly awaiting their first tomato harvest. Just in time for those first tomato sandwiches, researchers at the University of Georgia have helped to unlock the mystery of what separates today’s tomatoes from their inedible ancestors.

Plant geneticists in the lab of UGA department of horticulture professor Esther van der Knaap at the Institute for Plant Breeding, Genetics and Genomics are part of an international team of molecular geneticists who worked to trace the genetic history of the modern tomato from blueberry-sized forest fruit to the red, spherical gems in the supermarket.

They found that genes that are lost during domestication lines include those responsible for defensive stress responses as well as flavor traits. That loss means today’s tomatoes are more likely to be disease-prone and tasteless than their progenitors.

Scientists first published the tomato genome in 2012, but like the all published genomes, the scientists who completed this feat had to focus on one reference variety to build the genetic map for the species. In last week’s paper, van der Knaap’s consortium published a pan-genome for the tomato, which is a map of all of the shared and distinct genetic information that is found in 725 geographically and phylogenetically diverse tomatoes. The team published its findings in the May edition of Nature Genetics. The full version of their paper can be found at www.nature.com.

“Large questions, such as ‘How do genomes evolve in time and how does that change the appearance, flavor, horticultural adaptability of the plant?’ could not be addressed in the past with only one genome of one tomato variety,” said the UGA College of Agricultural and Environmental Sciences’ van der Knaap. “The sequencing of many additional varieties and comparisons in genome structure allow us to discover the novel and unexpected, as well as identifying characteristics in the wild that could be used to improve modern tomatoes.”

Tomatoes were domesticated from tiny, fruiting, wild relatives weighing about 1 gram. Along the way, ancient and modern farmers bred tomatoes to look like they do today.

These selections have led to a severe reduction in genetic diversity among tomatoes.

Let’s say that 100 tomatoes that differ in weight, color, shape and taste were grown in one field. A farmer evaluates these tomatoes and only takes home the large, flat and red tomatoes that are from a few plants.

The seeds from these large, red fruits are saved for next year’s season. If those seeds are planted next year, almost all of the plants will carry fruits that are very similar to their parent fruit — in this case a large, flat and red tomato. That process and selection led to a reduction in genetic and phenotypic diversity of the original pool.

Researchers wanted to know which traits were left behind in this process.

To find the answer, researchers, including van der Knaap, sequenced the genomes of 725 diverse tomato accessions and revealed something unexpected. The team found that a total of 4,873 genes were entirely or partially absent from the reference tomato genome published in 2012 but are present in other tomatoes, including wild relatives. They also showed that wild relatives contained more genes than their cultivated counterparts.

This suggests that domestication and selection have led to measurable gene loss.

Several of the lost genes encode for defense response traits as well as those that were negatively selected during domestication. In fact, as the tomato evolved from a wild to a cultivated plant, the majority of the missing genes were intentionally selected against. This includes a fruit weight gene that was recently cloned in the van der Knaap lab. A truncated version of the gene called a cell size regulator arose in the semi-cultivated tomatoes and is found in nearly all cultivated tomatoes. The loss of the original version of this gene presents another gene-loss scenario.

Another gene, TomLoxC, controls the levels of apocarotenoids and is critical for tomato flavor. The genes that support TomLoxC variations that account for high apocarotenoids and better flavor were lost as the tomato was domesticated and bred for size, shape, disease resistance and shelf life. As a consequence, they are present in 91.2% of wild tomatoes but only 2.2% of domesticated tomatoes, resulting in a reduction in fruit quality.