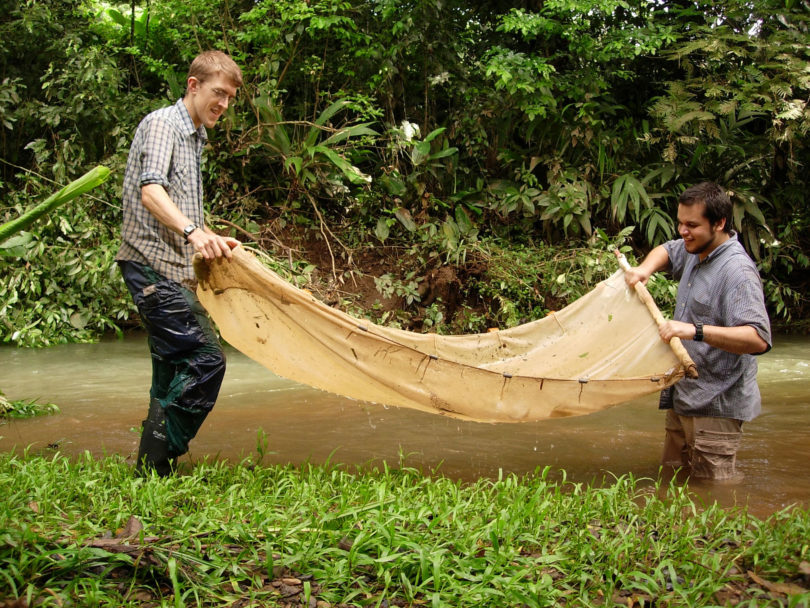 Athens, Ga. – Researchers from the University of Georgia Odum School of Ecology have found that certain neotropical stream ecosystems rely almost entirely on a single fish species known as the banded tetra for the critical nutrient phosphorus. In a paper recently published in the journal Ecology, the researchers, led by Gaston E. “Chip” Small, explain why this particular species plays such a crucial role-and why these stream systems are vulnerable as a result.

“I initially set out to understand how different physiological factors-diet, fish elemental composition, stream chemistry-interacted to affect rates of nutrient recycling,” said Small, who recently earned his Ph.D. from the Odum School and is now a postdoctoral research associate at the University of Minnesota.”The more interesting story about the disproportionate importance of certain species emerged from the results.”

Small explained that nutrient recycling is important in freshwater streams that are low in phosphorus and nitrogen. These chemicals provide nutrition for organisms, such as algae, that form the base of the food web. Some streams are naturally high in phosphorus and nitrogen. For streams with low levels, however, fish can provide these elements by excreting the excess nutrients they’ve consumed.

To understand the dynamics of nutrient recycling, Small and his team measured the nitrogen and phosphorus excretion rates of 12 fish species in four streams with varying levels of phosphorus. The research was carried out at La Selva Biological Station in lowland Costa Rica. Co-author Catherine M. Pringle, Odum School Distinguished Research Professor of Ecology, has been conducting research at La Selva with her students for more than 20 years and has amassed a wealth of data about stream chemistry and food webs there. “The work already done at La Selva was invaluable,” said Small. “We certainly couldn’t have started from scratch with unfamiliar stream systems and answered these questions.”

The researchers collected and analyzed samples, calculating the weight and amounts of phosphorus and nitrogen in the body of each fish. They also determined the composition of each fish’s diet-the food items as well as the proportion of aquatic to terrestrial sources-by examining digestive tract contents. This was particularly important, Small explained, because there was not a lot of existing data about the dietary component of nutrient recycling.

Small said that A. aeneus is also likely to be an important species in many other similar streams in the tropics and subtropics. “We have to understand what species are doing in ecosystems,” he said. “And there are real threats to them. There is a high potential for invasion by non-native tilapia, which is farmed nearby. Armored catfish also have been sighted in an adjacent stream-while native, they are invading from outside their natural range. Loss of a keystone nutrient recycler could have an enormous impact, as could the invasion of species with a high phosphorus demand. The way the ecosystem functions could change dramatically.”

Small said the research highlights the importance of conservation efforts in maintaining ecosystem function. “It is highly likely that, in other aquatic ecosystems, similarly important species are being lost before scientists even understand their importance,” he said.

Pringle said that Small’s study has put the ongoing research conducted at La Selva into a larger context. “Chip Small is an exceptional scientist,” she said. “It has been inspirational to watch his ideas unfold during his time at UGA.His intellectual depth and curiosity, combined with his creativity and steadfast dedication and perseverance toward goals, will most certainly continue to yield important scientific contributions in the fields of ecology and biogeochemistry.”

The study’s coauthors with Small and Pringle were Mark Pyron of Ball State University and John H. Duff of the U.S. Geological Survey. Funding was provided by the National Science Foundation and the U.S. EPA Science to Achieve Results Graduate Fellowship Program.