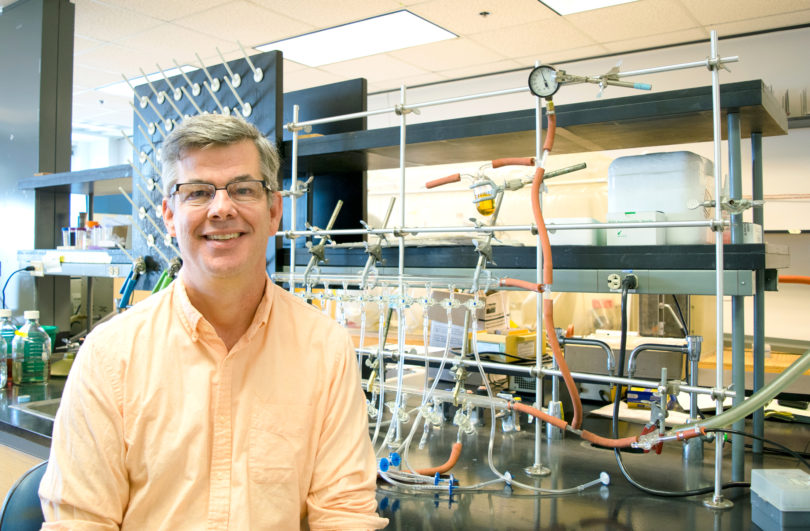 Researchers at UGA have received a $2.78 million grant from the National Institutes of Health to study CRISPR-Cas, a powerful gene editing tool derived from a defense mechanism evolved in bacteria and other single-celled organisms.

Like a pair of molecular scissors, CRISPR-Cas allows scientists to precisely edit sequences of DNA in everything from plants to humans, and it could one day be used to silence the genes that predispose humans to a myriad of diseases, including cancer, diabetes, cardiovascular disorders and mental illnesses.

“This is a technology that has taken the scientific world by storm,” said Michael Terns, Distinguished Research Professor of Biochemistry and Molecular Biology in UGA’s Franklin College of Arts and Sciences and principal investigator for the project. “But there are still a lot of things that we don’t know, and this project will help us expand and refine our ability to exploit CRISPR for research and biomedicine.”

CRISPR is often discussed as a single entity, but there are actually many different CRISPR-Cas systems, Terns said, and researchers are only beginning to understand the complex molecular processes that make these systems work.

Fundamentally, CRISPR-Cas is a defense mechanism that single-celled organisms use to ward off attacks from viruses and other invaders. For example, when a bacterium is attacked by a virus, it captures some of the virus’ DNA, chops it up into pieces and incorporates a segment of the viral DNA into its own genome.

It then uses this DNA to make RNAs that bind with a protein, and this complex seeks out and destroys the viral DNA.

As the bacterium experiences more threats, it accumulates a bank of past infections in a special part of its genetic code called CRISPRs, short for clustered regularly interspaced short palindromic repeats.
“This ability to cleave DNA is what makes CRISPR-Cas such a powerful research tool, but we don’t yet fully understand how many CRISPR-Cas systems capture foreign DNA sequences or how they selectively recognize and destroy foreign nucleic acids,” Terns said. “This grant will give us the freedom to explore these processes, which will ultimately speed the development of new methods to fight human disease.”

In particular, Terns hopes that their discoveries will lead to new methods of combating pathogenic bacteria, especially those that have become resistant to antibiotics.

However, Terns is quick to point out that this project is focused primarily on basic science and the examination of fundamental biological processes.

“Basic science is what gave us CRISPR in the first place; nobody knew that the most powerful gene editing tool in the world would come from single-celled organisms until scientists did the basic research to discover it,” he said. “I don’t think CRISPR has revealed all its secrets yet, and there may be even more powerful genetic tools waiting to be found.”

Terns’ research is funded by a grant from NIH’s Maximizing Investigators’ Research Award, or MIRA. The goal of MIRA is to increase the efficiency and efficacy of National Institute of General Medical Sciences funding by providing investigators with greater stability and flexibility, thereby enhancing scientific productivity and the chances for important breakthroughs.