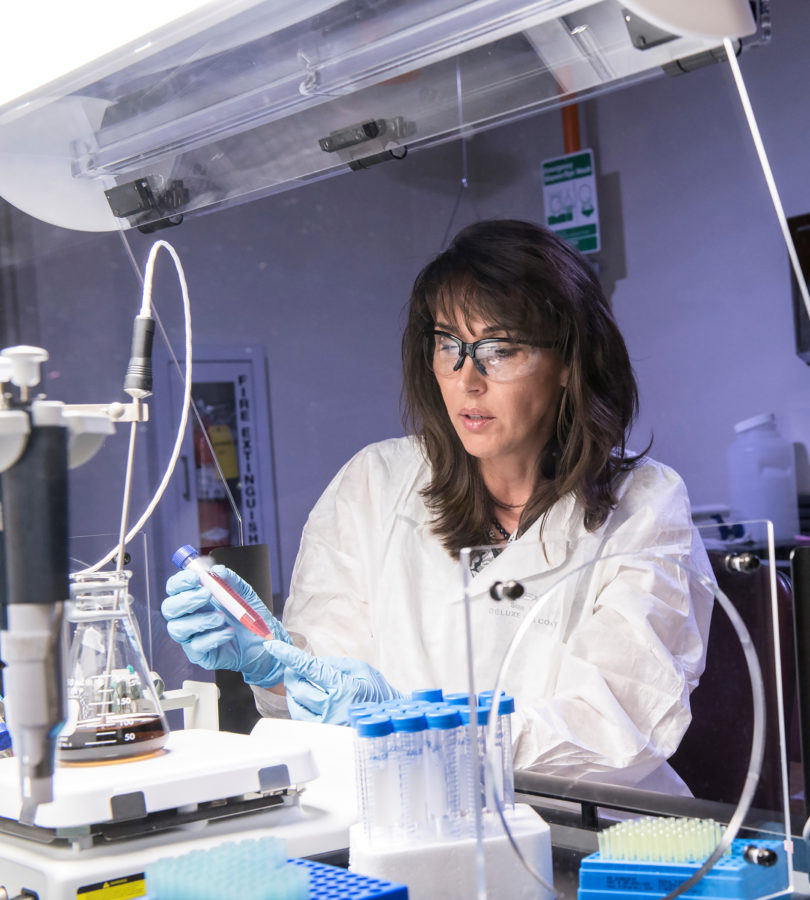 Simona Murph's newest research has resulted in the creation of a new hybrid nanoparticle that combines gold and rust nanoparticles. The new substance may prove to be useful in a variety of applications including hyperthermia treatment

Researchers from UGA are giving new meaning to the phrase “turning rust into gold” and making the use of gold in research settings and industrial applications far more affordable.

The research is akin to a type of modern-day alchemy, said Simona Hunyadi Murph, an adjunct professor in the UGA Franklin College of Arts and Sciences physics and astronomy department. Researchers combine small amounts of gold nanoparticles with magnetic rust nanoparticles to create a hybrid nanostructure that retains the properties of both gold and rust.

“Medieval alchemists tried to create gold from other metals,” she said. “That’s kind of what we did with our research. It’s not real alchemy, in the medieval sense, but it is a sort of
21st-century version.”

Gold has long been a valuable resource due to unique physical and chemical properties that make it inert and resistant to oxidation. But because of its high cost and limited supply, large-scale projects using gold can be cost prohibitive. At the nanoscale, however, using a very small amount of gold is far more affordable.

In the new study published in the Journal of Physical Chemistry C, the researchers used solution chemistry to reduce gold ions into a metallic gold structure using sodium citrate. In this process, if other ingredients—rust in this case—are present in the reaction pot during the transformation process, the metallic gold structures nucleate and grow on these “ingredients.”

“For the first time ever, we’ve been able to create a new class of cheaper, highly efficient, nontoxic, magnetically reusable hybrid nanomaterials that contain a far more abundant material, rust, than the typical noble metal
gold,” said Murph, who is also a principal scientist in the National Security Directorate at the Savannah River National Laboratory in Aiken, South Carolina.

When materials are broken down in size to reach nanometer scale dimensions—1-100 nanometers, which is approximately 100,000 times smaller than the diameter of human hair—these substances can take on new properties.

Gold nanoparticles of different sizes and shapes display different colors when impinged by light because they absorb and scatter light at specific wavelengths, known as plasmonic resonances. These plasmonic resonances are of particular interest for biological applications. If someone shines light on the gold nanoparticles, the absorbed light can be converted to heat in the surrounding media, and if bacteria or cancerous cells are in the vicinity of such gold nanoparticles, they can be destroyed by using light of appropriate wavelength. This phenomenon is known as photothermal therapy.

By replacing some of the nano-gold with magnetic nano-rust, researchers show that the hybrid gold and rust nanostructures are able to photothermally heat the surrounding media as efficiently as pure gold nanoparticles, even with a significantly smaller concentration of gold.