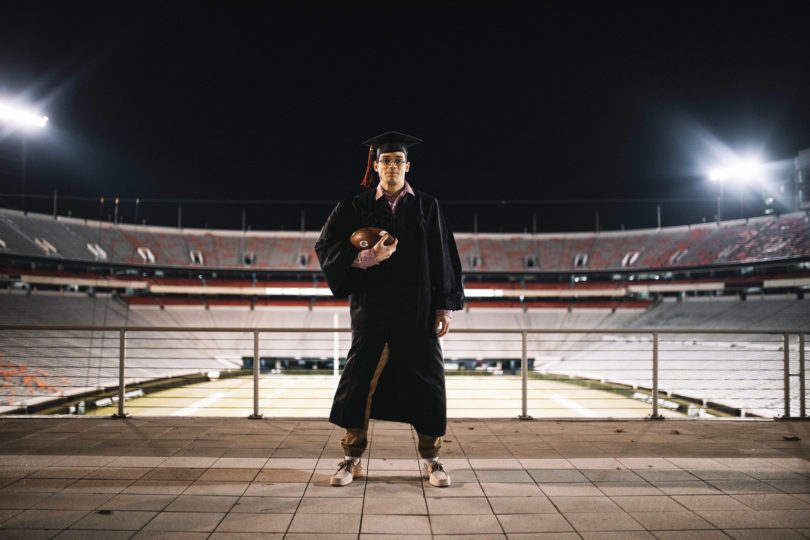 He’s known throughout Bulldog Nation by many names—Goggles and Hot Rod to name a couple. But now he’s got a new title to add to his resume: alumnus.

Blankenship earned a journalism degree with a focus on digital broadcasting in hopes to follow in his father’s footsteps as a sports journalist. “My dad wrote for the Atlanta Journal Constitution and the Marietta Daily Journal. I always thought it was cool how he got to talk to the players after games,” he said. “I knew from a young age that I wanted to go into journalism.”

UGA has been on his radar since he was a middle schooler attending kicking camps in Athens. After receiving scholarship offers from smaller schools, Blankenship decided to walk on at UGA because of the strong journalism program.

During his time as a student and local celebrity­­—he has his own Wikipedia page and social media hashtag (#respectthespecs)—Blankenship had to learn the art of balance, a feat he’s most proud of as a graduate. 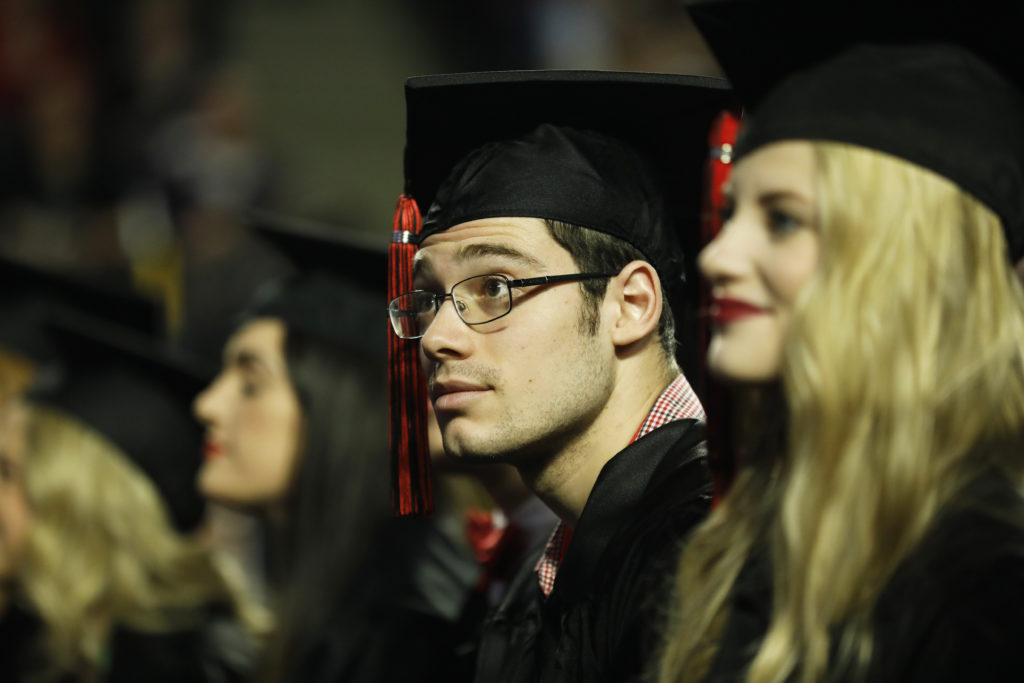 Rodrigo Blankenship listens to a speaker during the undergraduate Commencement ceremony. (Photo by Andrew Davis Tucker/UGA)

“It takes a lot of discipline [to balance academics and athletics.] You have to be fully committed to everything that’s going on in your life,” he said. “You have to have the discipline to not lose your motivation, no matter what time you get done. Football took up a big chunk of my day, but I knew that I was here to get an education and I did everything I could to make that my priority.”

Blankenship was mentored on the sidelines by UGA alumnus Kevin Butler, College Football Hall of Fame kicker and Super Bowl champion, who took notice of his eagerness to learn.

“Rod is the kid you refer to as ‘coachable,’” Butler said. “He is a great listener, which allows him to accept change, and change is the key to success on and off the field. Rod will be coachable regarding any challenge he takes on in his career.”

That eagerness translated to the classroom for Blankenship.

“I went into the classroom every day knowing I was at this institution for a reason and that these professors were here for a reason: to make me a better scholar,” he said. “At Grady, I wanted to learn to be a better writer, a better storyteller, a better reporter.”

As far as future plans, Blankenship hasn’t made any concrete decisions. But he has one year of football eligibility left and his eye on a few graduate programs at UGA, including the emerging media program in Grady and the sport management program in the College of Education.