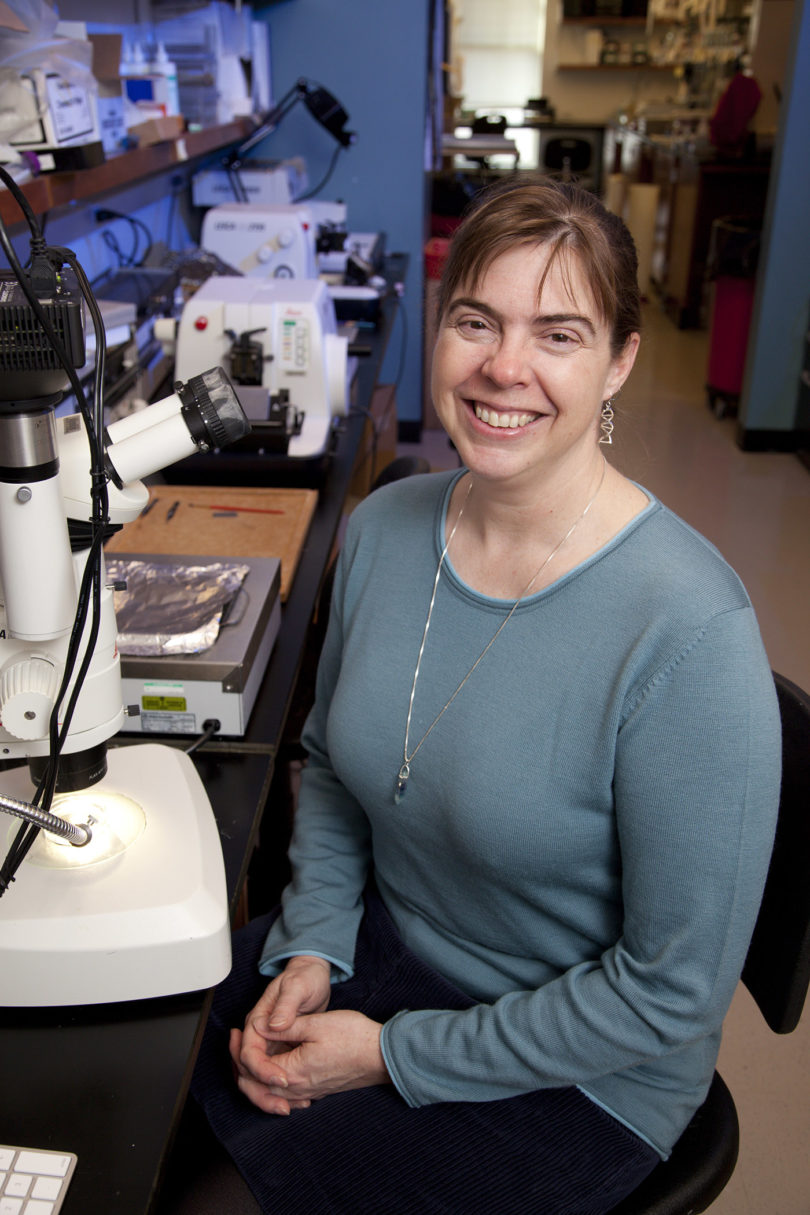 Nancy Manley is a professor of genetics in the University of Georgia Franklin College of Arts and Sciences. She is also a member of the UGA Developmental Biology Alliance.

New research just published by scientists from UGA provides the first evidence that a key gene may be crucial to maintaining the production of the thymus and its disease-fighting T-cells after an animal’s birth.

The discovery could help scientists find out how to turn the thymus back on, so it could produce T-cells long after it normally shuts down most of its function, which occurs by early adulthood in humans. If the finding leads to further ways to manipulate the gene, the result could be a new avenue for the body to fight disease more effectively as the body ages.

The research was published in the online edition of the journal Blood, a publication of the American Society of Hematology.

“Such things as infectious diseases, inflammation and heart problems are all related to immune response,” said Nancy Manley, an associate professor of genetics and chair of UGA’s Interdepartmental Developmental Biology Group. “You don’t have to think far to see how understanding the effect of this gene could affect the quality of life for older people and others as well.”

Other authors of the paper are doctoral graduate student Lizhen Chen and assistant research scientist Shiyun Xiao, also of UGA.

The thymus is an organ located in the upper part of the human chest cavity, behind the sternum. This organ is the location where important systemic infection fighters called T-cells develop. Throughout the past two decades, T-cell counts have become part of everyday dialogue due to their importance in monitoring HIV/AIDS and other disorders.

The thymus slowly begins to shut down early in life and becomes largely inactive by early adulthood. Still, that’s fine for most people, since an entire lifetime supply of T-cells is produced in that time. But, for some people, the loss of irreplaceable T-cells through disease can lead to chronic illnesses and a shortened life.

Until recently, scientists had thought that the thymus in adults was permanently shut down because no known regulatory mechanism existed that might allow doctors to “turn back on” the thymus if a person’s T-cells were compromised. There are now some treatments currently in trials that can transiently rejuvenate the thymus and increase thymic output in humans.

The problem has been that the mechanisms by which all this works are poorly understood, and all current treatments have systemic effects that can cause unacceptable side effects in all but the most seriously ill, who are more willing to tolerate them in exchange for possible benefit.

Now, however, Manley and her colleagues have shown for the first time that a gene called Foxn1 is required to maintain the postnatal thymus. Their results also suggest that changes in Foxn1 expression in important thymic epithelial cells during aging contribute to the slow shut-down of the thymus with age.

“While this research was done in mice, it’s not far-fetched to say that this points toward possible therapies for a huge variety of illnesses, from AIDS to age-related immunodeficiency disorders,” said Manley.

One clear advantage of understanding how Foxn1 works in maintaining the thymus and T-cell production is that it could lead to narrowly targeted therapies that are less likely to cause collateral side effects in a patient.

Manley got into studying the Foxn1 gene through her work as a developmental biologist, but the discovery of how the gene works in maintaining the postnatal thymus came as a surprise. The mouse carrying the genetically altered Foxn1 gene was produced by happenstance rather than by design. It turns out that the engineered gene has normal fetal expression and thymus development, but after birth, the gene’s expression decays much more rapidly than in normal mice, giving the scientists a way to rapidly assess just what the gene does in the growing animal.

“In effect, what happens in this model is that the gene ‘ages’ more ­rapidly than the mouse does,” said Manley. “This has given us a tremendous ability to understand to a more accurate degree just what the gene is doing.”

The irony that the new discovery may find its best uses in dealing with issues of aging and that Manley is a development biologist hasn’t been lost on her.

“The truth is that aging and development aren’t really different things,” she said. “They’re part of a continuum. The young thymus is like a turned-on spigot pumping out a diversity of T-cell types, and T-cells live a long time. Even after the spigot turns off, we don’t really see any major changes in them for most people until they reach about 60 years of age. Then the rates of things like rheumatoid arthritis and cancer go up substantially. And, as we all know, older people get sick more often.”

If, however, physicians were able selectively to turn T-cell production back on, then many diseases that currently afflict older people could become manageable if not, in cases, entirely absent. So if “60 is the new 40,” as some people say, that could theoretically change to “75 is the new 40.” And that first number of the pair could be even higher.

“Would turning Foxn1 back on allow us to regenerate an aged thymus?” Manley asked. “We just don’t know yet. But we are getting evidence now to say that it would allow it, and we will be working on that to see how it can happen. If we could delay when the thymus shuts off or have it work at a low level our entire lives, it has the potential to make a huge difference in so many health-related issues.”

While the mouse model doesn’t precisely mimic human response, it is close enough so that biologists and geneticists can often draw conclusions from mouse trials on how humans will respond.