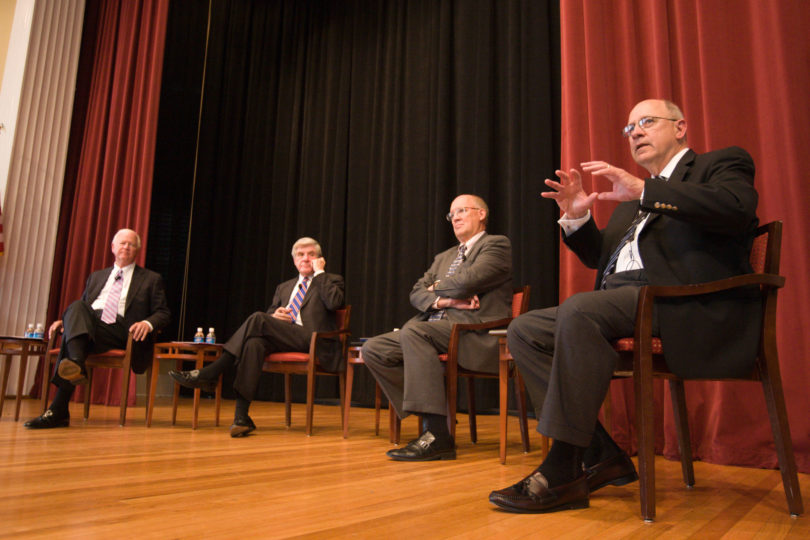 Taking part in the panel discussion on the role of new media in political campaigns are (from left): U.S. Sen. Saxby

New media forces are reshaping American politics, but traditional journalistic standards and practices still play an important role in national discourse, a panel of lawmakers and media professionals said Sept. 20 at the Chapel.

“More than anything, the Internet has given a free or very low-cost platform for anyone with an opinion, a story or a one-liner,” said UGA President Michael F. Adams. “And while on the one hand, a freer flow of information is good for democracy, there are also legitimate concerns about the credible assessment of the information that is available to us.”

Despite the panel’s differing political opinions, the panelists agreed more often than not. Each called for students to continue reading traditional media sources and to independently verify “facts” they read and hear. The discussion also touched on issues like Internet anonymity and privacy.

“Space and privacy no longer equate. Anything that happens in this session is now, in fact, virally spinning out,” Clark said. “There is no space that is not subject to digital re-presentation somewhere else.”

Technology’s rapid evolution also means that new elections bring new ways for voters and candidates to interact, which has both good and bad consequences, Chambliss said.

“It’s unbelievable how fast things can spread, whether they’re true or not,” he said. “During my last political campaign, we had six people sitting down every day looking at blogs.”

“You can’t chase down and stop it no matter what you do and how many people you have sitting at the monitors trying to stop it. There is no way to stop that once it goes,” he said. “Consequently, what we have to do is get the message out in the best ways that are out there.”

Boortz, who reaches millions both through the radio and the Internet, urged students not to rely solely on new media outlets.

“It is really sad to see the decline of newspapers in this country the way it is,” he said. “It is outrageous that my website made more money than the Atlanta Journal-­Constitution last year, so if I can make a commercial for anybody-don’t give up newspapers, folks. Buy ’em and devour ’em.”