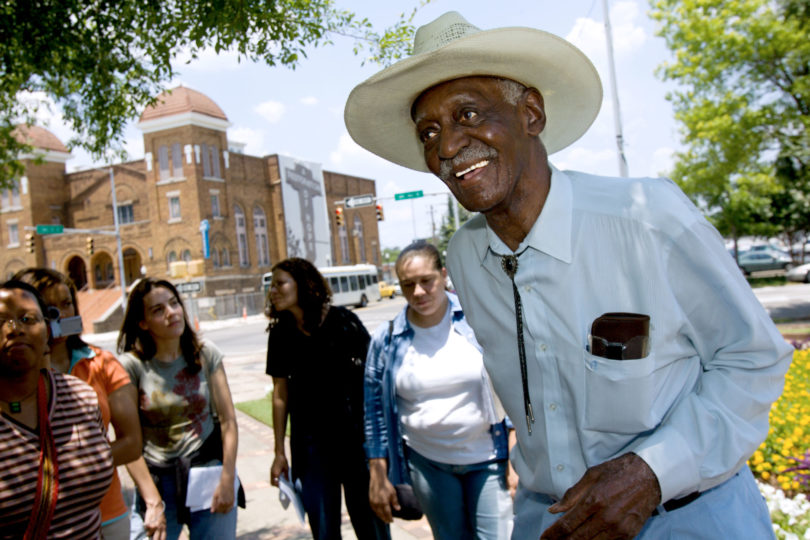 On a sweltering July day, ­Candace Blackburn stands at the front of the 16th Street Baptist Church sanctuary in Birmingham, Ala., on the site where the Rev. Martin Luther King Jr. eulogized four little girls killed in a 1963 bombing at the church.

She reads his immortal words to her classmates, nine fellow UGA students sitting in the church pews before her.

“May I now say a word to you, the members of the bereaved families? It is almost impossible to say anything that can console you at this difficult hour and remove the deep clouds of disappointment, which are floating in your mental skies. But I hope you can find a little consolation from the universality of this experience. Death comes to every individual.”

The civil rights era has just become real to Blackburn, a 40-year-old wife and mother.

“As I was standing there and reading what Dr. King said in the exact place he said it, I started thinking about myself,” she said later. “I wondered what I would do if I was there and (about) the feelings that their families went through. I have a teenage daughter-it made me realize just what a bad thing it was.”

For four days in June and July, students enrolled in the “Rhetoric of the Civil Rights Movement” class-taught at UGA’s Gwinnett campus-got a first-hand look at crucial sites of the civil rights era. Joined on the tour by a dozen others not enrolled but interested in the subject matter, they traveled the Deep South by bus through Alabama, Mississippi and Tennessee. At each stop, the students fulfilled part of their academic requirement by reading aloud a speech of their choosing-words delivered originally by the likes of King, Malcolm X, Medgar Evers and John F. Kennedy.

Many of them, including Blackburn, thought the movement revolved around a single leader who managed to change the nation through nonviolent protest. On the tour, they learned it was not just King’s movement, but a splintered and disorganized affair with dozens of leaders, not all nonviolent.

“I think young people today have a hard time relating to the past and classes like this are really helpful in doing that,” said senior Heather Bosquet, who was on the tour. “I’d heard of this class before, and people always told me it was a life-changing experience. And it was.”

In keeping with the splintered nature of the movement, the students heard contradictory rhetoric during the tour. At a stop in Mississippi, state senator and activist David Jordan told the students that things are getting better for black people, that times have changed and people are more accepting.

But Lecia Brooks, education director at the Southern Poverty Law Center’s Civil Rights Memorial, urged students not to believe their textbooks. The movement is far from complete, and civil rights crimes of today are often slipping past undetected, she said.

“I think the abuses we face now are more covert, less out in the open, so they’re harder to identify and harder to become outraged about,” Brooks said.

If the students had political leanings, they didn’t show it. The class of eight white and two black students was too busy taking in the tour’s sights to adopt a stance.

“I’ve created monsters,” instructor Rita Van Zant said with a smile. “They’re so tuned into the rhetoric of the time that things just can’t get past them. They’re examining everything.”

At the 16th Street Baptist Church, Blackburn composes herself and continues King’s eulogy: “Today. . . I paraphrase the words of Shakespeare: ‘Good night, sweet princesses. Good night, those who symbolize a new day. And may the flight of angels take thee to thy eternal rest.’ God bless you,” Blackburn says, quoting King.

Despite the heat, the fast-paced schedule and want for food, the students sit still in the pews. For a moment there is no talk about rhetoric or persuasion or why King chose to quote Shakespeare and not the Bible. In one of those moments rare for a speech class, no one speaks.