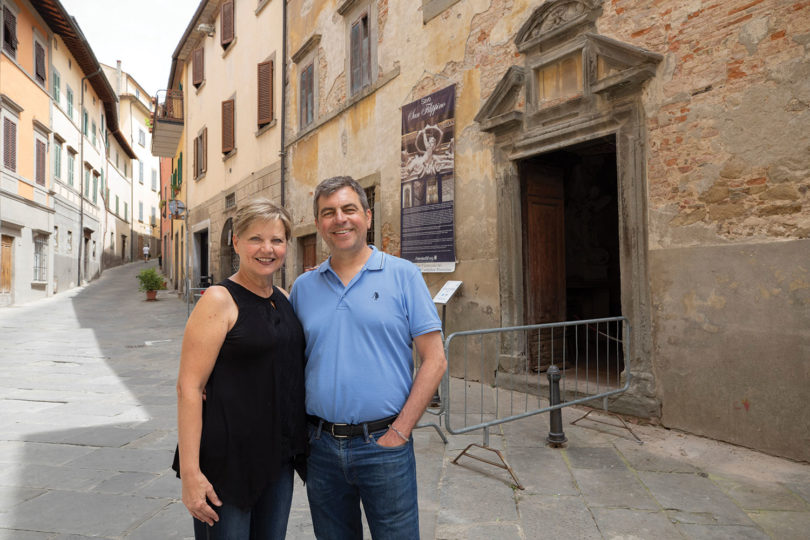 The unremarkable, ramshackle doorway is easy to ignore. Over many, many years, untold numbers of visitors to the Tuscan town of Castiglion Fiorentino have done exactly that.

But Rita Morgan Richardson BSEd’80, MEd’83, EdS’86 didn’t. She fell in love with what was behind it.

Richardson and her husband, Tim AB ’87, MA ’89, visited Tuscany in 2010 while their son, Zach BLA ’12, MLA ’14, was studying abroad at UGA’s campus in Cortona. At that time, they took a side trip to Castiglion Fiorentino, about 15 minutes north. They became enamored with a small 600-year-old apartment in the center of town and bought it a year later.

“Italy was always calling me. It was my dream to one day have a place there,” says Richardson, whose mother was born in Naples. Her parents met when her father was stationed in Italy following World War II.

When Richardson was in grade school, the family moved to Marietta, and when she enrolled at the University of Georgia, she studied French education. (Her high school in Marietta didn’t offer Italian, which is why she started studying French and continued with French and Italian at the university.) The trilingual Richardson eventually earned three degrees from the university and taught French at schools in Hartwell and Marietta. Following a move to Nashville and Zach’s birth, she started her own business, French for Fun, and taught the language to hundreds of children around the city.

Since buying their Tuscany apartment, Rita and Tim have visited Italy several times a year, and it was on a trip in 2015 that Rita took a longer look at that crumbling doorway in Castiglion Fiorentino. What lay behind it was a historic baroque chapel named San Filippino.

Richardson learned that the Catholic Church still owned the property, and after speaking with the nearby archbishop, she received the go-ahead to lead a project to renovate San Filippino. However, five centuries of off-and-on neglect can’t be erased in a fortnight, nor can it be done on the cheap.

The renovation includes the chapel and the apartments above it, where its priests once lived. Richardson foresees the chapel hosting weddings and other events. She is working to make the apartments into a retreat center for visiting artists, writers and scholars who will engage the town with readings, lectures and exhibitions. All of this would provide an economic boost to the town, which is a part of the Richardsons’ mission. The price tag: 500,000 euros (about $560,000). To help with fundraising, Richardson created a foundation, Save San Filippino, and she has become quite an effective, self-taught marketer.

Richardson learned how to create and edit video to leverage the effectiveness of electronic storytelling, and she developed the confidence to cold-call anybody in Italy and the U.S. That led to an account of the San Filippino project in a new book by best-selling author Dianne Hales called La Passione: How Italy Seduced the World. Richardson even joined Hales on recent book tours in the southeastern U.S and Florence, Italy.

So far, Richardson has raised about 10 percent of her monetary goal. That’s enough to put a new roof on San Filippino, and work on that project should begin later this year.

“We’re in this for the long term,” Richardson says. “San Filippino is part of me now. This is my mission in life. Learning languages at UGA has opened many doors for me throughout my life. Hopefully, with this project, I can pay some of that good fortune forward.”