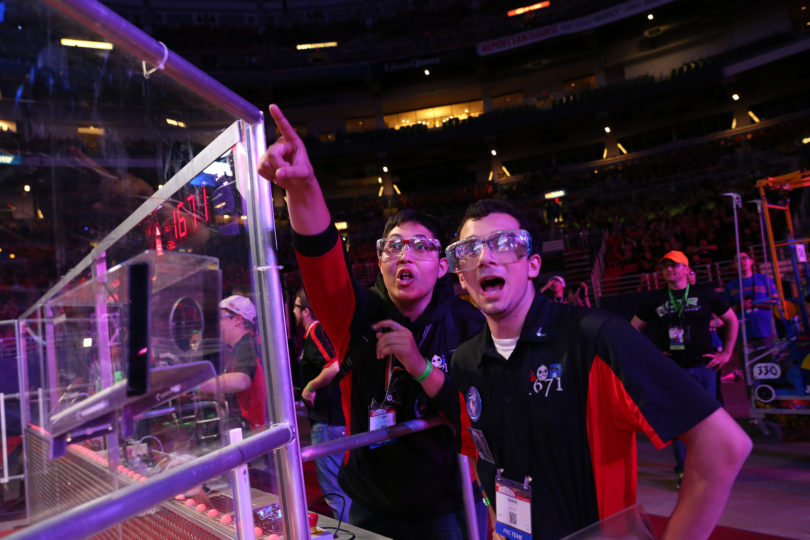 Athens, Ga. – The best high school robotics teams from across the state will converge on the University of Georgia campus this spring for a high-stakes, high-tech battle.

The UGA College of Engineering will host the 2016 FIRST Robotics Peachtree District State Championship April 14-16 at Stegeman Coliseum. Approximately 1,200 students representing 45 teams will participate in the competition that’s billed as a “varsity sport for the mind.”

The event is part of the annual For Inspiration and Recognition in Science and Technology—FIRST—family of robotics competitions. FIRST is a nonprofit organization that works to inspire young people to become scientists and engineers. More than 400,000 students in 89 countries participate in FIRST Robotics competitions, according to the organization.

“The University of Georgia is excited to welcome the Georgia FIRST Robotics championship to our campus,” UGA President Jere W. Morehead said. “Science education is flourishing at UGA, and our partnership with Georgia FIRST Robotics and the state’s aspiring engineers and scientists is further evidence of our leadership in the science, technology, engineering and mathematics fields.”

FIRST competitions are high-energy events surrounded by a game-day frenzy as teams of robots square off in front of thousands of cheering fans. The organization announces a new robotics challenge each January. Students, mentored by professional engineers and educators, have six weeks to build a robot from a common kit of parts. They work with hundreds of components, including programmable radio controllers, motors, electrical circuitry and mechanical parts.

The focus of the FIRST competition is a natural fit for UGA’s rapidly growing College of Engineering, according to Donald Leo, the college’s dean.

“Bringing the Georgia FIRST state championship to Athens is a wonderful opportunity for UGA as well as the high schools and students that will participate here on campus,” he said. “FIRST Robotics develops not only technical skills but also critical-thinking, leadership and communication skills-the same attributes our college seeks to provide to the next generation of engineers.”

The event also provides UGA and the College of Engineering an opportunity to showcase their academic programs and research to high school students interested in the sciences, Leo said.

This year’s challenge, “FIRST Stronghold,” is a medieval-themed game played by two alliances of three teams each. Alliances compete against each other to breach their opponents’ defenses and capture their castle tower.

Each match begins with a 15-second autonomous period in which the robots operate independently of human control. During the remainder of the two-and-a-half-minute match, student drivers operate the robots from behind their castle walls. The playing field, 54 feet long and 27 feet wide, includes castle towers, shifting defenses and a “secret passage” where robots can restock their ammunition.

“What’s unique about FIRST is that it provides students with a well-rounded and well-balanced set of skills toward college and career development,” said Connie Haynes, the executive director of Georgia FIRST. “In FIRST, students have to find a solution to a challenge by working together and thinking critically. They gain research and technical skills as well as the ability to deal with unexpected problems.”

This is the first year Georgia FIRST has expanded its competition to include four qualifying events, Haynes said. Teams advanced to Athens by performing well during competitions in Albany, Columbus and Dalton and at Kennesaw State University. Teams that win at UGA can advance to the FIRST World Championships, slated for April 27-30 in St. Louis.

Georgia FIRST Robotics and the UGA College of Engineering are seeking volunteers to serve in a number of key support roles during the event. Those interested in volunteering should contact Mickey Montevideo at mickeym@uga.edu or 706-542-9011.

A video of the playing field and the challenge is available at https://www.youtube.com/watch?v=VqOKzoHJDjA.