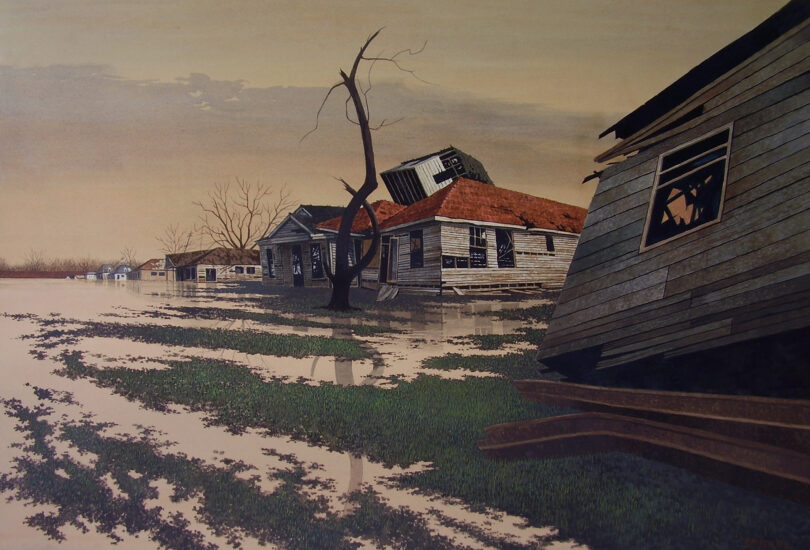 Exhibition on view at the Georgia Museum of Art through Oct. 18

It’s been 15 years since Hurricane Katrina hit New Orleans, killing hundreds of people and leaving millions unhoused. Rolland Golden, a New Orleans native who died last year, made paintings in its aftermath, trying to transform painful experiences into visual poetry through his art. The exhibition “Hurricane Katrina and Its Aftermath in the Art of Rolland Golden” is on view at the Georgia Museum of Art at the University of Georgia through Oct. 18.

Born in 1931, Golden grew up in the Mississippi Delta, spending time in Alabama and Mississippi as well as Louisiana. He attended what is now the University of Louisiana at Lafayette for one semester, during which he played football, before leaving to join the U.S. Navy. He served for four years during the Korean War, doing teletype communications aboard aircraft carriers. After being discharged, he used his GI Bill funds to take art classes for two years at the school run by John McCrady in New Orleans’ French Quarter. Golden opened his own art school and studio in 1957 and was a professional artist and teacher for the rest of his life. Hollywood actor and art collector Vincent Price saw his work in the 1960s and brought it to the department store Sears Roebuck to reproduce and sell. Those sales allowed Golden to achieve financial independence as a fine artist. 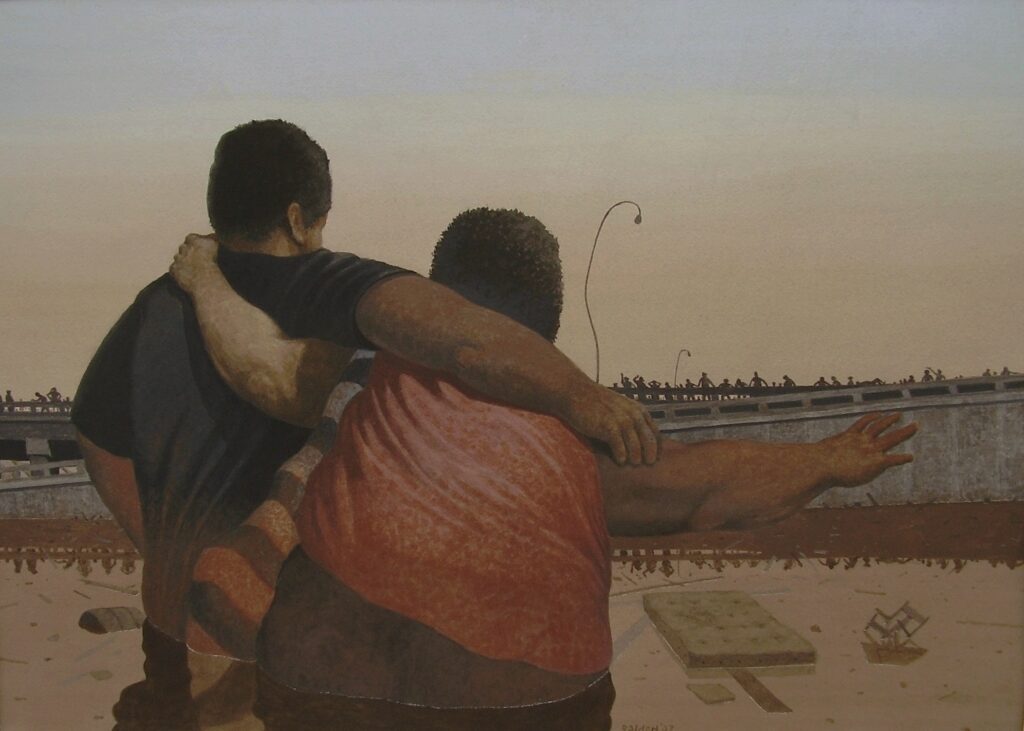 Golden’s style involved making detailed preparatory drawings, one of which is in this exhibition along with the finished painting that resulted. The devastation of Katrina made him consider retiring, but instead he made a series of paintings that addressed the disaster, starting with “Silent Vigil.” He had begun that canvas before the storm, focusing on a statue in a rural Mississippi cemetery. When Golden and his family returned to New Orleans, after the storm, he transformed the painting into an image of a New Orleans cemetery. Keeping the statue, he added a building in the background and water below the figure’s knees. A darker line, several inches higher, shows the passage of time as the water slowly drains from the city. Golden’s images are rich in narrative, whether they show a family reunion on an elevated highway ramp or empty houses tumbled atop one another from the force of the water.

“This exhibition opens just as two hurricanes are bearing down on New Orleans and Louisiana,” said William U. Eiland, the museum’s director and curator of the exhibition. “Golden’s images of the earlier damage to the Crescent City by Katrina are poignant, nostalgic and, quite frankly, frightening as visualizations of nature’s fury and humankind’s defenselessness in the wake of its forces. In the best tradition of American realism in the visual arts, Golden has depicted Katrina’s wrath and New Orleans’ resilience.”

The museum is currently open limited hours, Thursday through Sunday, with free timed ticketing to limit occupancy. Visit georgiamuseum.org to reserve a time slot and find out more about new rules for visiting.