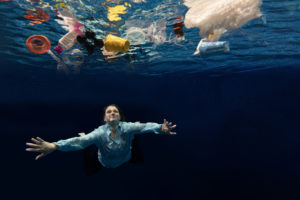 Conceptual portrait of associate professor Jenna Jambeck floating underwater with trash debris to illustrate her work with ocean pollution in the dive well at the Gabrielsen Natatorium. (Photo by Andrew Davis Tucker/UGA)

Roughly 8 billion kilograms of plastics enter the world’s waters every year, and even Jambeck, who has published research that quantifies plastic “leakage” to the oceans, admits that the volume of plastic entering oceans can be hard to comprehend.

“It’s equal to five grocery-size bags full of plastic for every foot of coastline in the world,” she said. “If you imagine us all standing, hand-to-hand, covering the coastline of the entire world, this is what’s in front of each one of us.”

Marine plastics are picked up by currents and collected together in the ocean. For example, the Great Pacific Garbage Patch is now twice the size of Texas. Patches like these are swirling petrochemical spills, but unlike crude oil, the long molecular chains in plastics don’t exist in nature and don’t meaningfully biodegrade.

“The same properties that make plastics so versatile make these materials difficult or impossible for nature to assimilate,” she said.

Instead, plastics wear down into microplastics—a category for particles smaller than 5 millimeters, or roughly the width of a pinkie fingernail—deteriorating further into nanoplastic particles.

From there, the articles discuss how these plastics are eventually consumed and create toxic environments.