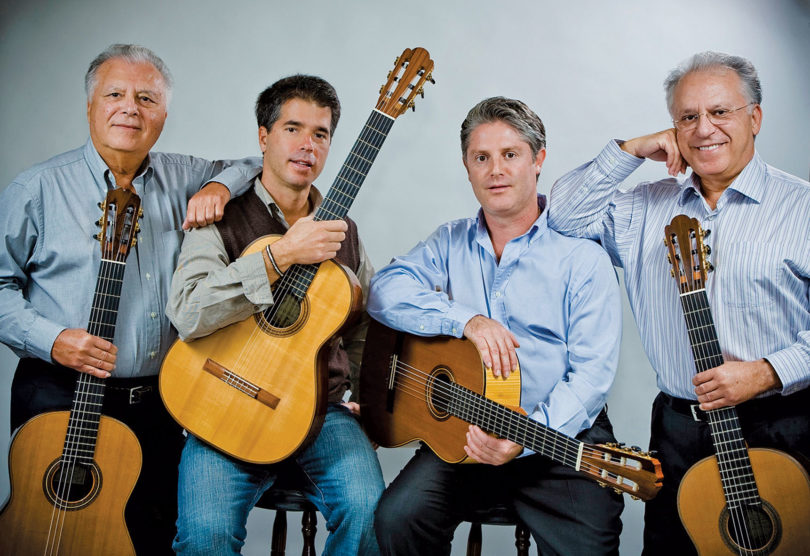 The UGA Performing Arts Center will present the Romeros guitar quartet Nov. 17 at 8 p.m. in Hodgson Concert Hall. The program will include works by Manuel de Falla, Isaac Albeniz, Georges Bizet and Heitor Villa Lobos, along with a suite by Romeros founding member, Pepe Romero.

Known as “The Royal Family of the Guitar,” the Romeros were founded by legendary guitarist Celedonio Romero with his sons, Celin, Pepe and Angel.  Today the quartet consists of the second (Celin and Pepe) and third generations (Lito and Celino) of the Romero dynasty.

In 1957, the family left Spain and immigrated to the U.S. where they became the first classic guitar quartet while the boys were still teenagers. The New York Times has said, “Collectively, they are the only classic guitar quartet of real stature in the world today; in fact, they virtually invented the format.”

The Romeros have performed on multiple occasions at the White House, and in 1983 they appeared at the Vatican in a special concert for Pope John Paul II. In 2000 King Juan Carlos I of Spain knighted Celin, Pepe and Angel, and in 2007 the Romeros were honored by the Grammys with the President’s Merit Award for artistic achievements.

Tickets for the Romeros concert are $26-$47 and can be purchased at the Performing Arts Center, online at pac.uga.edu or by calling the box office at 706-542-4400. UGA students can purchase tickets for $6 with a valid UGA ID, limit one ticket per student.

Patrons are invited to Make It An Evening with a tour and free dessert at the Georgia Museum of Art at 6 p.m.