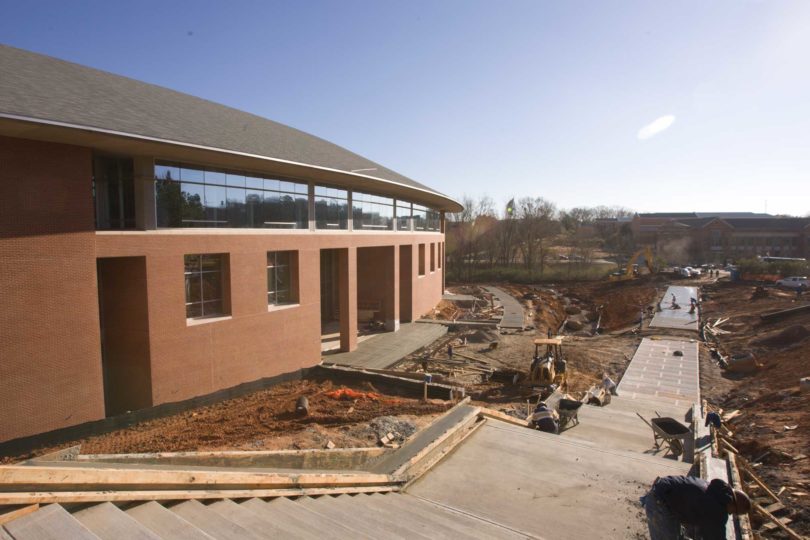 Construction on the new $40 million Visual Arts Building is expected to be completed in time for fall classes. Located on East Campu

The Medical College of Georgia School of Medicine, a unit of the University System of Georgia, could expand statewide to 1,200 students by 2020, from 745 students currently, an increase of approximately 60 percent, according to a proposal presented Jan. 15 to the board of regents.

The expansion—which would address a critical need for more physicians in the state of Georgia—will require significant expansion in Augusta, which will continue to serve as the foundation for a single state-operated medical school.

The Medical College of Georgia School of Medicine also will develop and operate a new four-year campus in Athens in partnership with the University of Georgia as well as expand two clinical campuses anchored in Albany and Savannah.

“Georgia has slipped to 40th from 37th among all states in the number of physicians per resident,” said USG Chancellor Erroll B. Davis Jr. “The health and safety of Georgians are at risk. We need more doctors.”

Georgia has a unique ability to address a serious need of educating more physicians, according to Paul Umbach, president of Pittsburgh-based Tripp Umbach, which issued the report.

On behalf of the board of regents, MCG retained Tripp Umbach in September 2007 to complete a statewide medical education expansion study.

“My firm has analyzed medical education needs across the U.S., and I can truly say that the stars and timing are lined up for this to be a truly collaborative, cost-effective effort that will lead to a healthier Georgia,” Umbach said.

The plan calls for:

• Significant medical education expansion in Augusta. MCG’s School of Medicine will expand from its current class of 190 first-year students to 240 first-year students by 2017. The plan recommends that a medical education facility be constructed to handle the additional students.
• Development of a campus in Athens. MCG will develop a new campus in Athens in partnership with UGA, and the two institutions will work together to leverage mutual strengths in biomedical research and individual university strengths in public health.
• Continued partnerships of regional campuses in Savannah and Albany. About one in four MCG medical student rotations is now conducted outside of Augusta. The plan recommends that
60 third- and fourth-year students be educated at residential campuses in Albany and Savannah throughout  the next seven years.
“A critical element of the proposed strategy is that we are looking at a statewide solution to an issue important to all of us,’’ said Daniel W. Rahn, MCG’s president and senior vice chancellor for Health and Medical Programs for the USG. “Together we can accomplish much more than we can separately.”
“On behalf of the University of Georgia community, we are excited about developing this partnership program with the Medical College of Georgia,” said UGA President Michael F. Adams. “I believe the acquisition of the Navy School property will allow us to provide long-term improvement in the health of Georgians and to offer a true service to the state.”
If implemented fully, Tripp Umbach calculates that the expansion will more than double the economic impact of MCG’s School of Medicine, generating more than 1.6 billion additional dollars annually and supporting more than 10,000 additional jobs statewide. For every $1 invested by the state of Georgia in 2020 in medical education, a total of $2.54 will be returned in state tax revenue, according to the economic analysis section of the consultant report.
Formal adoption and approval of the report will be on the agenda for an upcoming meeting of the board.
The regents included funding for statewide medical education expansion in the University System’s fiscal year 2009 budget proposal.