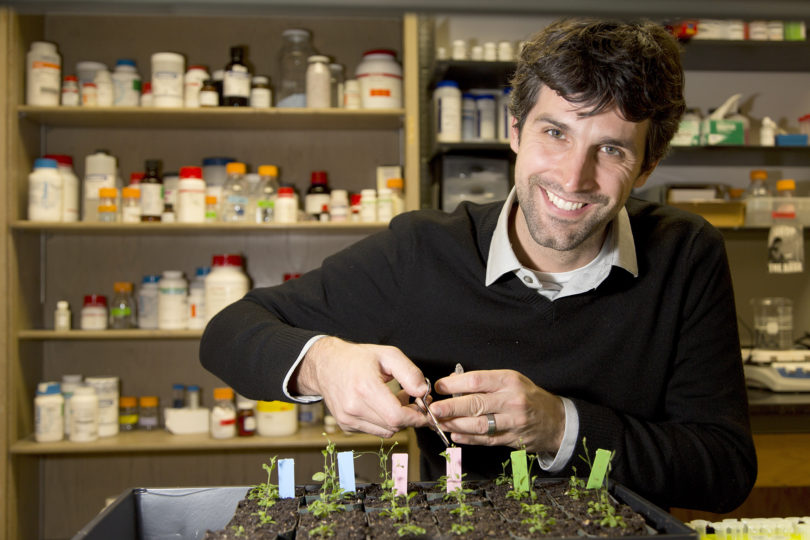 Athens, Ga. – An international team of researchers led by scientists at the University of Georgia has discovered how parasitic plants, which steal their nutrients from another living plant, evolved the ability to detect and attack their hosts. Their findings, published recently in the journal Science, could lead to new techniques to control the thieving weeds.

There are thousands of parasitic plant species, but the most burdensome for humans are those that infiltrate farmland and destroy crops. Parasite infestations reduce crop yields by billions of dollars each year, particularly in developing nations where access to advanced herbicides and other control methods is limited, according to the researchers.

“In the simplest terms, these are plants that eat other plants,” said David Nelson, co-author of the paper and assistant professor of genetics in UGA’s Franklin College of Arts and Sciences. “The seeds of some parasitic plants, like witchweed for example, can lie dormant in soil for more than a decade, waiting to grow until they detect the presence of a host. We wanted to understand how the parasites know other plants are nearby so we could develop new ways of combating them.”

As plant roots grow, they release hormones called strigolactones into the soil. This is a signal that normally helps fungi form a beneficial connection to the plant, in which they each trade nutrients. But the seeds of parasitic plants also possess the ability to sense strigolactones, which prompt them to germinate, attach to the host root and syphon off nutrients.

“It’s kind of like root radar,” said Nelson, who is also a member of UGA’s Plant Center. “But the incredible thing is that this strigolactone detection system seems to have evolved from plant genes that normally control a seed’s ability to detect fire.”

When a forest burns, compounds in the smoke and ash leach into the soil. Many plants have evolved the ability to detect these compounds, which signal that their competition-large shady trees or dense ground cover-has been destroyed and it might be an opportune time to grow.

Nelson and his colleagues found that during the evolution of parasitic plants, the smoke detector gene duplicated and some copies switched to become strigolactone detectors. This critical switch is what allows the parasites to recognize and attack nearby hosts.

“Now that we understand the fundamental genetics that give parasitic plants this ability, we can develop new ways to help farmers fight them,” Nelson said.

Researchers may, for example, develop synthetic compounds that interfere with the receptors that parasitic plants use to sense strigolactones, making them blind to the presence of a host.

Or, it might be possible to create chemicals that mimic strigolactones. If these were sprayed over a field prior to the normal growing season, farmers could trick the parasitic plants by making them grow when there are no hosts present, a strategy known as suicidal germination.

Ultimately, the researchers hope that their discovery can serve as the foundation for an easy and affordable treatment that farmers in developing countries can use to boost their food production.

“The process that parasitic plants use to sense their hosts has been a mystery in our field for more than 50 years,” Nelson said. “This could open the doors to a lot of useful new technologies to help those in greatest need.”