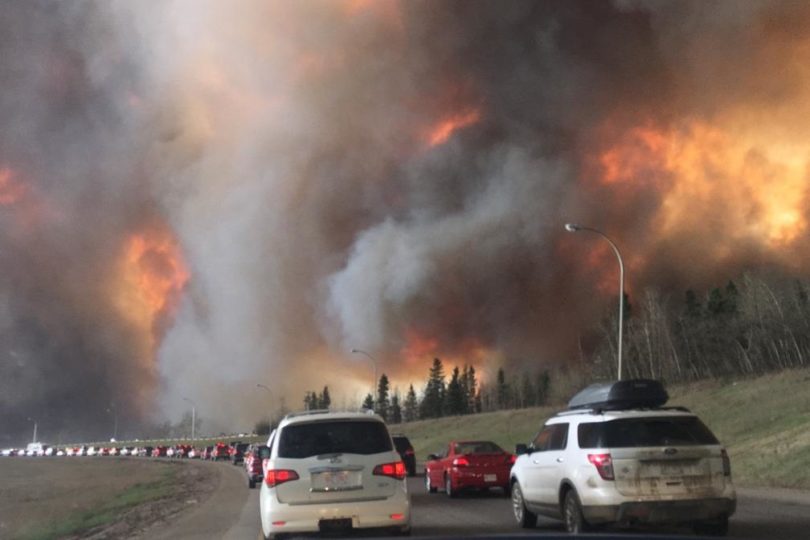 Large flames and heavy smoke surround a congested Highway 63, south of Fort McMurray, when wildfires swept through the area in Alberta, Canada, in 2016. A UGA-led study investigated the impact on mothers of infants who were evacuated and their ability to properly feed their young children.

Mothers and caregivers report stress related to infant feeding and food security during a crisis.

Breastfeeding is widely regarded as the healthy and safe choice for infant feeding, especially during a disaster when food security is often a concern.

In the first study to measure the impact of a large-scale wildfire evacuation on infant feeding, a research team led by the University of Georgia surveyed mothers and caregivers who evacuated from the wildfires that swept through Fort McMurray in Alberta, Canada, in 2016.

Over 88,000 people were forced to leave the remote town and take shelter in cities hours away, and most Fort McMurray residents didn’t return home for almost six weeks. The strain of the evacuation was amplified for mothers and caregivers.

Many of those surveyed said they experienced stress related to infant feeding and food security. Some respondents said that they had concerns about breastfeeding or difficulty finding space to clean bottles and feeding supplies.

“First responders and shelter personnel need to think of infant feeding as a food security issue,” said Sarah DeYoung, an assistant professor of health policy and management in UGA’s College of Public Health and lead investigator.

But at the moment, she said, infant feeding is an afterthought in disaster sheltering and evacuation. It’s crucial to incorporate safe infant feeding protocols in emergency response plans, especially for babies who are younger than 6 months old, said DeYoung.

“That’s a critical time frame,” she explained. “Babies should be breastfed until they are at least 6 months old, so if there is a 4- or 5-month-old in an evacuation, early weaning can still have health implications.”

Breastfeeding is the best choice

The number of women exclusively breastfeeding dropped from 64 percent before the fires to 36 percent. Some mothers said they struggled to breastfeed or pump milk, believing that their milk supply diminished due to the stress of the evacuation.

Many of the caregivers also shared that because of the evacuation, being physically far away from their health care or lactation specialists made it difficult to access support regarding feeding concerns.

Breast milk provides adequate nutrition, hydration and comfort for infants up to 6 months of age, and is especially important for the health of infants in situations where resources are scarce.

DeYoung said it’s important to communicate with mothers and caregivers that breastfeeding is still possible during emergencies as it remains the safest form of infant feeding post-disaster.

The WHO cautions against mass formula distribution in emergencies and instead recommends a targeted approach. But the research team gathered data that suggests shelter personnel handed out formula to evacuees without assessment or support.

Almost one-third of caregivers reported receiving formula without any preparation or storage instruction, which can lead to gastrointestinal distress and dehydration if the formula is improperly mixed. In fact, one of the largest shelters for Fort McMurray evacuees did experience an outbreak of diarrhea, prompting the sheltering staff to bring in infant feeding specialists.

DeYoung said these findings offer some immediate takeaways for emergency planners. Above all, lactation and infant feeding resources need to be on hand to provide support for families with infants, and breastfeeding caregivers should have space in sheltering facilities for infant feeding.

“Mothers and caregivers are experts in what their children need,” said DeYoung. “It should not be viewed as a luxury to make sure the infant has food security during and after the disaster.”

The study, “The Effect of Mass Evacuation on Infant Feeding: The Case of the 2016 Fort McMurray Wildfire,” was published in Maternal and Child Health Journal.