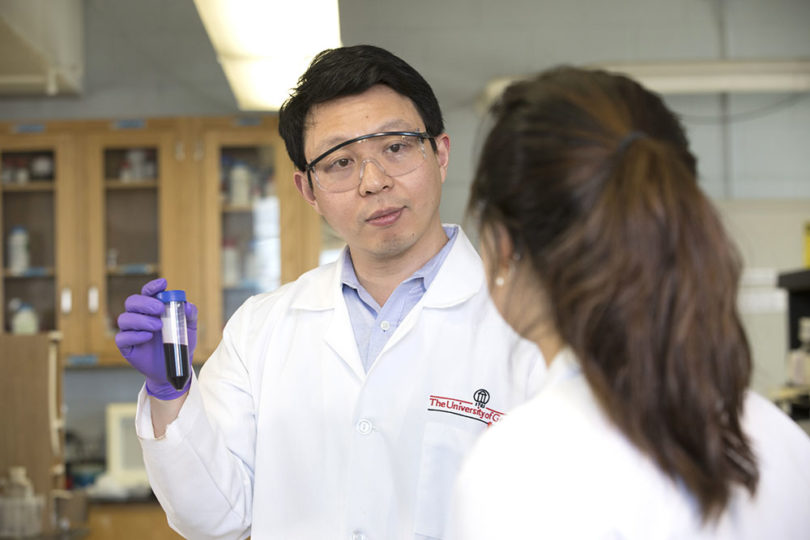 A new study at the University of Georgia has found a way to attack cancer cells that is potentially less harmful to the patient. Sodium chloride nanoparticles – more commonly known as salt – are toxic to cancer cells and offer the potential for therapies that have fewer negative side effects than current treatments.

Led by Jin Xie, associate professor of chemistry, the study found that SCNPs can be used as a Trojan horse to deliver ions into cells and disrupt their internal environment, leading to cell death. SCNPs become salt when they degrade, so they’re not harmful to the body.

“This technology is well suited for localized destruction of cancer cells,” said Xie, a faculty member in the Franklin College of Arts and Sciences. “We expect it to find wide applications in treatment of bladder, prostate, liver, and head and neck cancer.”

Nanoparticles are the key to delivering SCNPs into cells, according to Xie and the team of researchers. Cell membranes maintain a gradient that keeps relatively low sodium concentrations inside cells and relatively high sodium concentrations outside cells. The plasma membrane prevents sodium from entering a cell, but SCNPs are able to pass through because the cell doesn’t recognize them as sodium ions.

Once inside a cell, SCNPs dissolve into millions of sodium and chloride ions that are trapped inside by the gradient and overwhelm protective mechanisms, inducing rupture of the plasma membrane and cell death. When the plasma membrane ruptures, the molecules that leak out signal the immune system that there’s tissue damage, inducing an inflammatory response that helps the body fight pathogens.

“This mechanism is actually more toxic to cancer cells than normal cells, because cancer cells have relatively high sodium concentrations to start with,” Xie said.

Using a mouse model, Xie and the team tested SCNPs as a potential cancer therapeutic, injecting SCNPs into tumors. They found that SCNP treatment suppressed tumor growth by 66% compared to the control group, with no drop in body weight and no sign of toxicity to major organs.

They also performed a vaccination study, inoculating mice with cancer cells that had been killed via SCNPs or freeze thaw. These mice showed much greater resistance to a subsequent live cancer cell challenge, with all animals remaining tumor free for more than two weeks.

The researchers also explored anti-cancer immunity in a tumor model. After injecting primary tumors with SCNPs and leaving secondary tumors untreated, they found that the secondary tumors grew at a much lower speed than the control, showing a tumor inhibition rate of 53%.

Collectively, the results suggest that SCNPs killed cancer cells and converted the dying cancer cells to an in situ vaccine.

SCNPs are unique in the world of inorganic particles because they are made of a benign material, and their toxicity is based on the nanoparticle form, according to Xie.

“With a relatively short half-life in aqueous solutions, SCNPs are best suited for localized  rather than systemic therapy. The treatment will cause immediate and immunogenic cancer cell death,” he said. “After the treatment, the nanoparticles are reduced to salts, which are merged with the body’s fluid system and cause no systematic or accumulative toxicity. No sign of systematic toxicity was observed with SCNPs injected at high doses.”

The study was published in Advanced Materials.