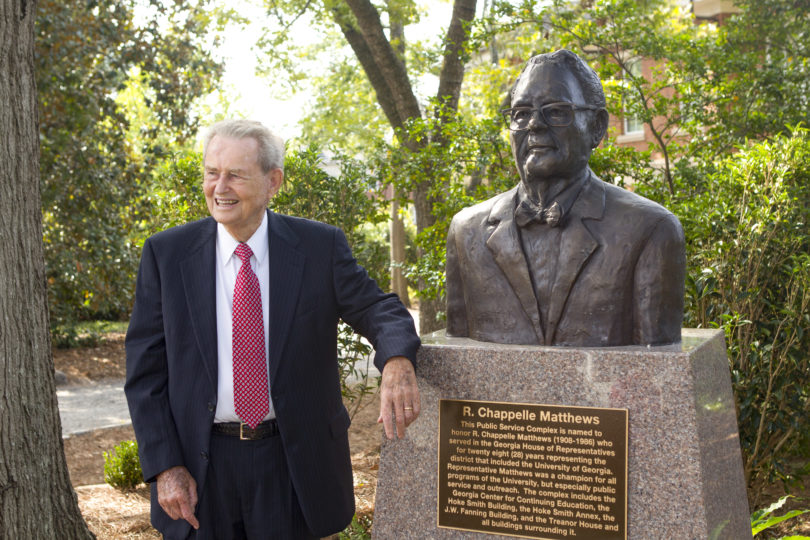 Former Vice President for Public Service Gene Younts poses for a photo during the dedication and unveiling of the R. Chappelle Matthews bust in front of the Treanor House in 2011.

University of Georgia Public Service and Outreach became the most extensive campus-based outreach program in the nation during Gene Younts’ 22-year tenure as vice president, and his legacy continues through the $416 million annual impact that UGA public service units have on communities across the state. 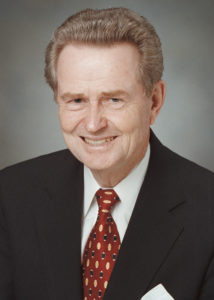 “The University of Georgia joins the family, friends and colleagues of Gene Younts in mourning the loss of such a dedicated public servant and extraordinary leader,” said President Jere W. Morehead. “Gene’s positive impact on UGA and the state of Georgia has been profound.”

Younts joined the University of Georgia in 1969 as associate dean of the College of Agriculture and director of the Rural Development Center in Tifton. In 1972 Younts moved to Athens and succeeded J.W. Fanning to become the second person to hold the position of vice president for public service at UGA.

Under Younts’ leadership, the division grew to include seven additional units: the State Botanical Garden of Georgia, Business Outreach Services, the Fanning Leadership Center, the Office of International Development, the Information Technology Outreach Service, the Museum of Natural History and the Institute of Continuing Judicial Education. By the end of the 1990s, UGA’s public service faculty and staff provided more than 6 million hours of service each year to the citizens of Georgia in addition to their interactions with those in other states and countries.

“Gene recognized the University of Georgia was in a unique position to help communities across the state address significant challenges,” said Jennifer Frum, the current vice president for public service and outreach. “We would not have the reach we have today, working with communities in each of Georgia’s 159 counties, without his vision.”

Younts was instrumental in the planning that led to an $8.4 million grant from the W.K. Kellogg Foundation to be used for expansion of the Georgia Center for Continuing Education. He also played a key role in obtaining funds for the renovation of the Lucy Cobb Institute, home to the Carl Vinson Institute of Government.

Additionally, Younts planned for and led the popular New Faculty Tour that, for many new academic and service faculty, provided an introduction to the state and its residents. The tour began in 1977 and has been held every year since, except for six years during which a poor economy led the university to suspend the tour. Morehead reinstated the tour when he became president in 2013.

Younts also started the Walter Barnard Hill Awards in 1999 to recognize academic and service faculty for excellence in outreach. Hill was the University System of Georgia chancellor who served from 1899 to 1905 and first articulated the university’s modern public service and outreach mission.

Helen Hudson Mills received a Walter B. Hill Award in 1995 and was named a Walter B. Hill Fellow in 2000, UGA’s highest award in Public Service and Outreach. She worked at the Georgia Center for Continuing Education when Younts was vice president. At his request, she chaired a committee that reclassified about 450 cooperative extension agents as faculty.