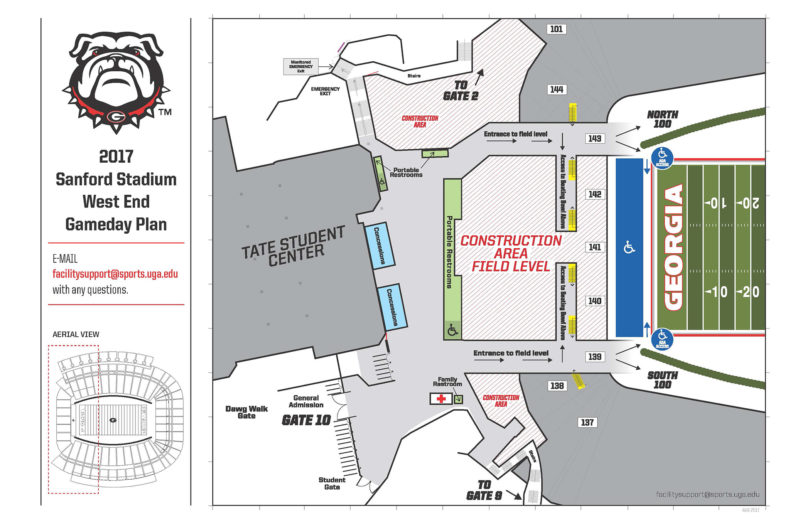 Construction on Sanford Stadium will mean a few changes, mostly in the west end zone, for fans attending football games this fall.

The west end zone project aims to add 120,000 square feet to the stadium for a new locker room for the Bulldogs, a recruiting lounge to host and entertain prospects on game day, new restrooms, a larger video board and a new plaza and concession area for game day fans.

When finished, the project will make the area similar to Reed Plaza. Construction should be complete in time for the 2018 football season.

Because of construction this season, stadium gates will change slightly for fans who usually use gates 1 and 10, which is closest to student seating in sections 138-144. Those gates will be combined into one large gate located at the Tate Student Center.

“We would encourage those fans who don’t need to enter there to go to gates 2 or 9 to help with the speed of entry into Sanford,” said Josh Brooks, executive associate athletic director. “We’re also asking fans to get here early to avoid congestion at the gates.”

In the west end zone plaza, concessions will be grab ‘n go style, and will include hot dogs, pizza and Chick-Fil-A. Portable restrooms will accommodate the fans in that part of the stadium.

The Dawg Walk will still take the same path into the stadium.

For questions about the project, email facilitysupport@sports.uga.edu.