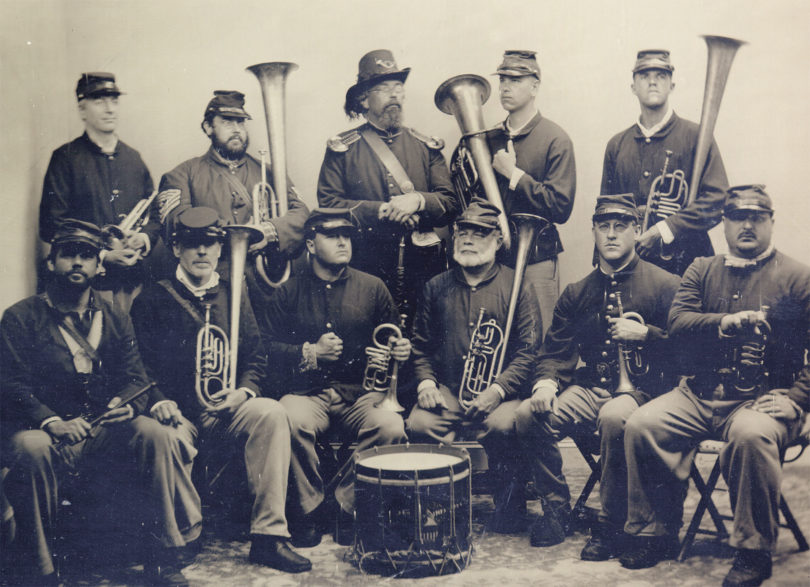 Members of the Cornet Band

Athens, Ga. – The University of Georgia Performing Arts Center invites audiences to step back in time and experience a 19th century concert with a performance by Saxton’s Cornet Band on April 19 at 8 p.m. in the Ramsey Concert Hall.

Saxton’s Cornet Band recreates the sounds, appearance and conduct of brass bands during the antebellum and Civil War eras. Performances are well researched and are complete with dramatic readings and period humor.

The original Saxton’s Cornet Band was founded by Henry Saxton of Lexington, Ky., prior to the Civil War. The band performed for more than 60 years into the early 20th century, playing concerts, dances, parades and funerals.

The modern day Saxton’s Cornet Band performed for the inauguration of President George W. Bush and for the National Park Service at sites around the country, including the Gettysburg National Military Park. The band was featured in the films Gettysburg and The Day Lincoln Was Shot and has toured internationally, including a performance at the National Concert Hall in Taipei, Taiwan.

Tickets for the Saxton’s Cornet Band concert are $32 with special discounts for UGA students. Tickets can be purchased online at pac.uga.edu or by calling the Performing Arts Center box office at 706/542-4400 (toll free at 888/289-8497).

The performance underwriters are Calvin D. and Clare E. Hasbrouck.

The symposium begins at 9 a.m. with an overview by moderator Frank Cipolla, professor emeritus of the State University of New York at Buffalo, and concludes with a round table discussion at 2:30 p.m. on “The Current State of American Band History Research.”

The list of topics and speakers is scheduled to include University of Maryland professor Patrick Warfield on “The March as Musical Drama and the Spectacle of John Philip Sousa,” Kansas State University professor Craig Parker on “The Music of Sousa’s Cornet Soloists,” UGA Performing Arts Center director George Foreman on “Jules Levy: The Russian Connection,” and City University of New York professor Raoul Camus on “Richard Willis and the West Point Band.”