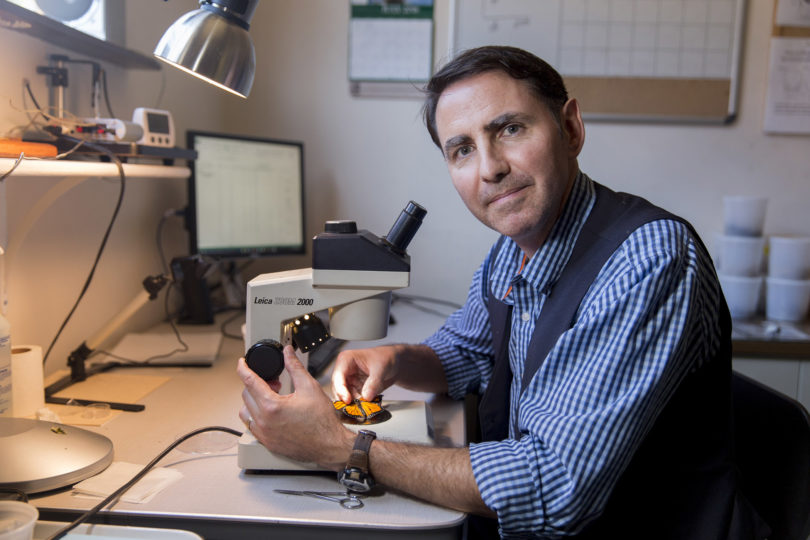 Halfway through Andy Davis’ physiological ecology lab, most of the students have their cellphones out—but they’re not texting or checking messages. Instead, they’re recording part of the day’s experiment: a battle among beetles.

Each student has placed a shiny, black Bess beetle in a small plastic tub at the front of the lab, after first measuring how much oxygen the beetle uses when at rest. The beetles immediately start fighting with one another—and the students, thoroughly engaged, pull out their phones.

After five minutes of the beetle free-for-all, the students retrieve their insects and measure oxygen intake again. By comparing the before and after results, they are learning about how stress affects beetle metabolism.

“There are other ways we could do this lab,” said Davis, an assistant research scientist in UGA’s Odum School of Ecology. “But if I look back at my undergraduate days, I remember the labs that were fun. That’s what I’m going for, getting the students excited about hands-on physiological research.”

He clearly excels at it.

Since he joined the faculty of the Odum School in 2010, 24 undergraduates and one high school student have conducted independent research projects under Davis’ guidance.

He gets help with his research from the students, and they learn all about the scientific process from start to finish—developing a research question, collecting and analyzing data, and writing up the results for publication. At least 15 papers resulting from these projects already have been or are soon to be published in peer-reviewed ­scientific journals.

“One of the things I’m proudest of in my career so far is helping these undergraduates become published scientists,” he said.

It was the hands-on experience of an undergraduate ornithology class that set Davis on his career path as a scientist. His interest in birds and bird migration soon expanded to encompass other migratory animals, notably monarch butterflies. Today his research covers physiology, disease ecology, parasitology, hematology and natural history in a variety of animal systems.

“When you’re studying physiology, it really helps to have that broad perspective; there are a lot of fundamental similarities in physiological traits of vertebrates whether it’s a bird or a turtle,” he said. “And there’s a lot of overlap between the physiology of vertebrates and invertebrates as well. I feel that the diversity of organisms I study in my research makes me a better scientist.”

Most recently Davis has been applying that multifaceted approach to pollinator conservation, one of his newest research interests. He and his wife, Sonia Altizer, the Georgia Athletic Association Professor of Ecology in the Odum School, are supervising ecology doctoral student Ania Majewska in a study of butterfly gardens at the UGA Center for Research and Education at Wormsloe. The aim of the project is to determine what effects these gardens have on butterfly numbers, health and survival.

“With iconic species like monarch butterflies in decline, we’re seeing more and more people who want to help going out and planting butterfly gardens,” he said. “Surprisingly, there’s very little data on this trend.

“We thought we should see if we can come up with a way of investigating scientifically this idea of planting butterfly gardens to determine if it’s a promising conservation tool or not,” Davis added. “The Wormsloe project has been very exciting in that respect, because this is brand new territory in butterfly conservation.”

At the same time, Davis and his students continue to probe, and publish on, the physiology of beetles and other animals, in class and through independent research projects.

“It’s a great thing for undergraduates to get this kind of hands-on research experience,” he said. “I encourage students to go ahead and knock on a professor’s door and faculty members to invite undergraduates into their labs. It’s a win-win for everyone.”