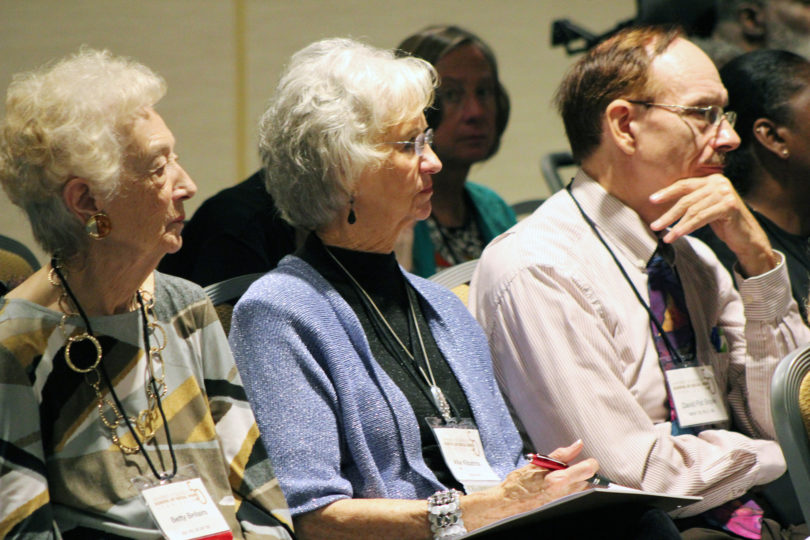 Tributes, toasts and earnest dialogue about the future of social work education marked the School of Social Work’s 50th anniversary celebration, held Oct. 17-18 at the Atlanta Marriott Marquis. The theme of the celebration was “Reflecting on Our Past and Envisioning the Future.” Activities included a town hall forum, a gala dinner and a post-gala brunch reception.

The Oct. 17 forum, which was open free to the public, consisted of two panel discussions. The first was moderated by Glenda A. Hatchett, Georgia’s first African-American chief presiding judge of a state court. Panelists were Nancy Kropf, associate dean for research and strategic planning and professor of social work at Georgia State University; Joseph H. Lumpkin Sr., chief of police for the Athens-Clarke County Unified Government; Antonio Molina, chair of the Latino Caucus of the Democratic Party of Georgia; and Michael Thurmond, superintendent of the DeKalb County School District.

Panelists discussed and took questions from the audience on the challenges of educating social workers to meet the needs of the growing populations of the aged, youth in the juvenile justice system, Latino immigrants, and children and families in crisis. After a short break, a second panel composed of School of Social Work faculty members Jennifer Elkins, June Gary Hopps, Rebecca Matthew and Trisha Reeves continued the discussion with an emphasis on contemporary issues in social work education and practice. The faculty panel was moderated by alumnus Fenwick Broyard III, executive director of the Athens-based nonprofit Community Connection.

The gala dinner featured tributes and reminiscences from alumni and all three of the deans who guided the school across 50 years: founding Dean Charles A. Stewart, who served from 1964 to 1995; Bonnie Yegidis, who served from 1995 to 2003; and the current dean, Maurice C. Daniels, who has served since 2005. Cheryl Davenport Dozier, president of Savannah State University and a former faculty member of the school, served as master of ceremonies. Pamela Whitten, senior vice president for academic affairs and provost, expressed her admiration for the school’s achievements and led a toast to its future.

In attendance were two alumni from the first graduating class of 1966: Betty Bellairs and Allie Kilpatrick. Four current students, representing each of the school’s degree programs-bachelor’s, master’s and doctorate in social work and master’s in nonprofit management -gave a lively presentation about the skills needed in their professions.

Hatchett closed the program with a salute to the school. She praised social workers, citing her experiences as a juvenile court judge.

“Tonight, more than anything else, I come to say thank you,” she said. “By doing what you do, you are making a change; you are causing transformational progress in the lives of children and generations yet to be born.”

A portion of proceeds from the gala dinner benefited the Charles A. Stewart Scholarship, which provides financial support for graduate students.