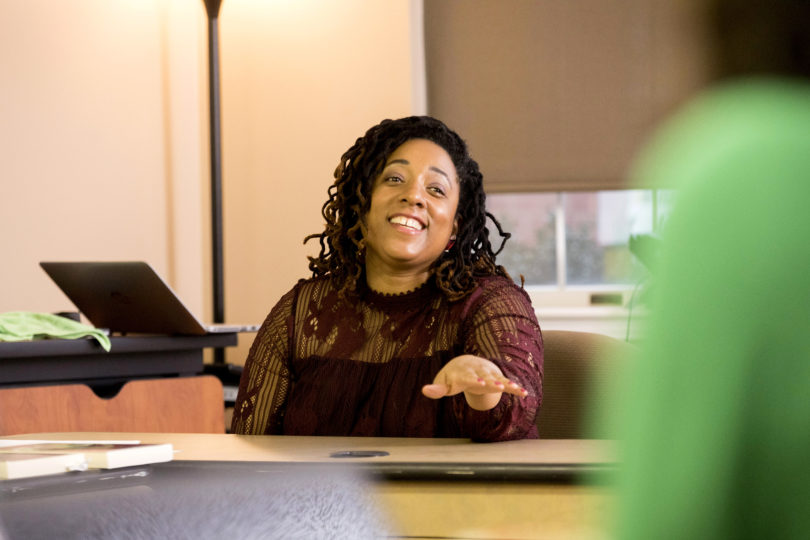 Tiffany Washington, an assistant professor in the School of Social Work, specializes in aging and health. (Photo by Dorothy Kozlowski)

The older married couple faced the classroom, a little nervous. He’d been diagnosed with dementia; she was his caregiver. At the invitation of Tiffany Washington, an assistant professor in the School of Social Work, they had agreed to tell their story before a room full of social work students and faculty who were interested in how they maintained a good quality of life. 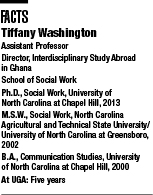 When they were finished, the audience applauded loudly. The couple smiled, happy to help.

That is why in 2015 Washington developed the Houseguest Program with funding from the Office of Service-Learning and in partnership with the Athens Community Council on Aging. Now in its fourth year, the graduate-level course brings students into homes of families affected by dementia to provide respite to caregivers.

The innovative approach benefits families and has significantly increased student interest in services for people with dementia and their caregivers. Research papers and presentations about the program also have excited academic scholars, who have expressed interest in expanding it.

“There is a general student ­ ­disinterest in working with the aging population, so we have to think of creative ways to expose them to it,” said Washington.

Shannon Griffiths, who received her master’s degree in social work from UGA in 2017,  credits Washington with helping to awaken her interest in oncology and geriatrics. Griffiths now works as a palliative care hospital social worker.

Washington was “a major inspiration” said Kareeme Morrison, who also received a master’s degree in social work from UGA in 2017. Morrison is a manager in Jamaica’s Steps to Work Programme, an initiative aimed at breaking the cycle of inter-generational poverty on that island nation.

Born in New Haven, Connecticut, Washington moved with her family to rural North Carolina while she was in grade school. Her experiences as a medical social worker sparked her interest in finding more effective interventions for older individuals with chronic kidney disease. After earning her doctorate in social work at the University of North Carolina at Chapel Hill, she was urged by a faculty mentor to look at the University of Georgia.

She liked what she saw.

Outreach is important to Washington. She is active in her church and has volunteered for service trips to the Dominican Republic and New York. In the secular world, she also leads a Maymester course in Ghana, where students perform service projects and are exposed to West African social support practices.

An avid cyclist and crafter, Washington also is generous with her spare time. She plans to teach cycling to others and in January presented co-workers with homemade red earrings to celebrate the Georgia Bulldogs’ football season.