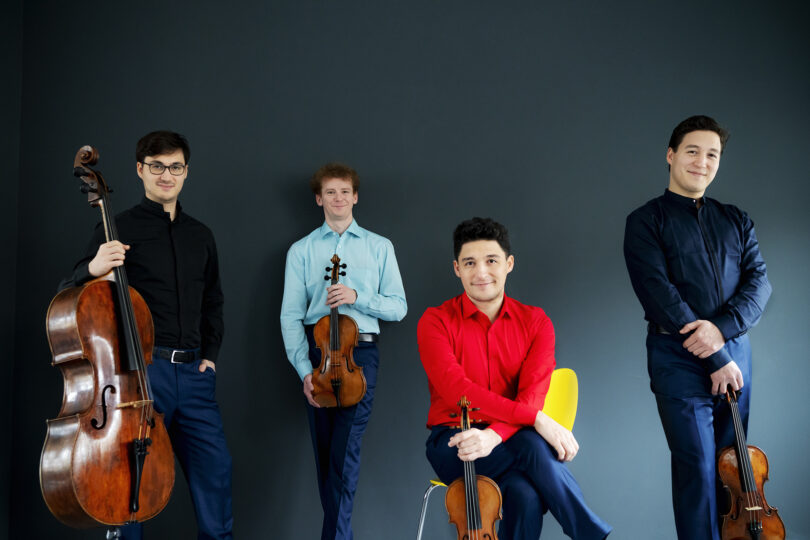 Who knows someone better than their sibling? Hardly anyone.

So, it’s no surprise that the Schumann Quartet has a special connection that audiences and critics savor. This German ensemble consists of three brothers who have been making music together since early childhood—Erik, Ken and Mark Schumann—and violist Veit Hertenstein.

The quartet has garnered praise for its “fire and energy” (Süddeutsche Zeitung) in well-received performances throughout the world and has been appointed to prestigious residencies at London’s Wigmore Hall and New York’s Chamber Music Society of Lincoln Center.

The group makes its Athens debut Nov. 20 at 3 p.m. at Hodgson Concert Hall. The lyrical program is steeped in European tradition (pieces by Haydn and Beethoven) and American Protestantism (Charles Ives, who wove hymns into his richly melodious First String Quartet).

The quartet’s recordings are acclaimed. The 2018 album “Intermezzo” (music of Mendelssohn, Schumann and Reimann with soprano Anna-Lucia Richter) has been hailed enthusiastically both at home and abroad and received the Opus Klassik award in the quintet category. It is celebrated as a worthy successor to the award-winning Landscapes, in which the quartet traces its own roots by combining works of Haydn, Bartók, Takemitsu, and Pärt. Among other prizes, the latter received the Jahrespreis der deutschen Schallplattenkritik, five Diapasons, and was selected as Editor’s Choice by BBC Music magazine.

For its previous CD, “Mozart Ives Verdi,” the Schumann Quartet was accorded the 2016 Newcomer Award at the BBC Music magazine awards in London. In 2020 the quartet expanded its discography with “Fragment,” an examination of one of the masters of the string quartet, Franz Schubert.

In its Athens program, the group performs works by masters of the string quartet: Haydn and Beethoven, whose popular “Harp” quartet rounds out the afternoon. In between comes the early First String Quartet by Yale student Charles Ives, subtitled “From the Salvation Army.” In it, Ives draws on his experience as a church organist to weave in hymn tunes that would have been familiar to New England congregations. This quartet has none of the stylistic complexity and flagrant dissonance that characterizes his later music.

The Schumann Quartet continues a compelling UGA Presents roster of chamber music. On Jan. 10, the legendary Emerson String Quartet makes a stop on its farewell tour with an all-Beethoven program. On Feb. 28, Michael Barenboim and the West-Eastern Divan Ensemble perform a double quartet by Louis Spohr, among other works. And the sensational Pavel Haas Quartet performs lushly Romantic music from its native Czech Republic on March 13.

There is a pre-performance talk about the Schumann Quartet program in Ramsey Concert Hall at 2:15 p.m. with free admission.