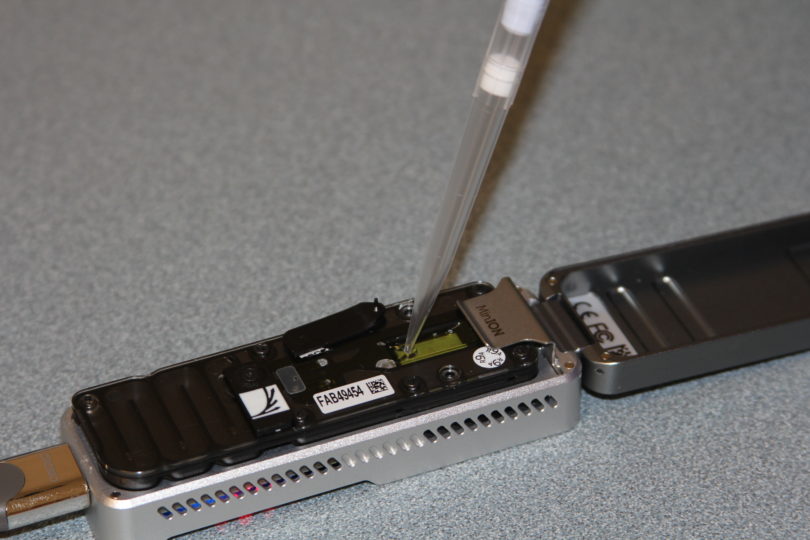 A portable sequencer in a laboratory in the University of Georgia Center for Food Safety in Griffin, Georgia.

Quick, efficient pathogen detection and fingerprinting is essential and often lifesaving when it comes to preventing foodborne illness. Now, University of Georgia food scientist Xiangyu Deng has created a system that can identify foodborne pathogens in a fraction of the time taken by traditional methods.

“In outbreaks, time is very important. When a pathogen is detected in food, we then have to determine its subtype, or fingerprint,” said Deng, an assistant professor of food microbiology at the UGA Center for Food Safety in Griffin. “We need to shorten this process to the least amount of time possible.”

Currently, detecting and subtyping the pathogen are separate processes, but Deng has combined these two steps through a process called “metagenomics analysis.”

“To prevent a pathogen from spreading, you have to first identify it by studying its DNA signatures. Sometimes you only have a few cells of the pathogen in a food sample, just a tiny fraction of the resident microbial populations on the food,” he said. “You could sequence the entire sample (of food) to identify the pathogen inside it, but that would not give you enough pathogen DNA signal for identification.”

Traditionally, the pathogen is separated from the food sample by growing the pathogen in bacterial cultures, which takes 24 to 48 hours, Deng said.

To shorten the culture process, researchers in Deng’s lab apply tiny magnetic beads coated with antibodies that pull the pathogen cells out. Then they amplify the DNA of the captured pathogen cells so they have enough DNA to sequence.

“Using a new, very small sequencing tool that’s about the size of a USB drive, we can sequence while capturing the data in real time,” Deng said.

Compared to the mainstream genome sequencer that produces sequencing data after running for a day or two, the small sequencer generates enough data for pathogen detection and subtyping in about an hour and a half, he said.

Deng tested the process on raw chicken breast, lettuce and black peppercorn samples treated with salmonella and retail chicken parts that were naturally contaminated with different serotypes of salmonella. In one case, a small amount of salmonella was detected and subtyped from lettuce samples within 24 hours. This takes two weeks using standard methods.

The Centers for Disease Control and Prevention estimates that 1 million foodborne illnesses and 380 deaths in the U.S. each year are linked to nontyphoidal salmonella.

Identifying pathogenic bacteria before a food product is released into the market can reduce the number of people who get food poisoning, said Francisco Diez, director of the food safety center and an expert on enterohemorrhagic E. coli, an important cause of food contamination and foodborne illness.

“Our center conducts cutting-edge research to ultimately protect the consumer,” he said. “The kind of scientific investigations the center conducts can be applied to solve contamination issues for the food industry.”

Deng’s work was featured in the February issue of Applied and Environmental Microbiology, a leading journal in the field.

To learn more about the food safety center, visit www.ugacfs.org.