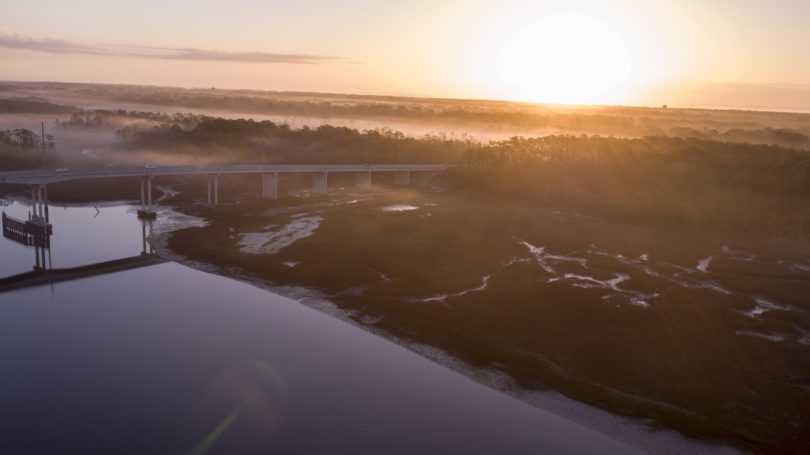 When Hurricane Dorian roared up the East Coast during the first week of September, the places where people live and work in several states were under threat. The first line of protection against storm damage was made up of coastal vegetated ecosystems, including nearly 300,000 acres of salt marshes in Georgia.

The salt marsh, seagrass, and mangrove ecosystems that bore the brunt of pounding waves are not, however, immune from damage. Increasingly frequent and intense storms, coupled with rising sea levels, break apart and erode these ecosystems, threatening their ability to protect coastal communities and act as a globally important soil carbon reservoir.

Coastal salt marsh, seagrass and mangrove ecosystems – known as blue carbon ecosystems – account for a small fraction of the world’s land surface but store more carbon per unit area than forests. A new University of Georgia-led research study stresses the importance of understanding the value of carbon buried along the coasts worldwide – how much there is and how to best protect it.

The article, published in Nature Geoscience, explains the significance of blue carbon ecosystems and the need to better understand the processes that promote soil carbon storage and how disturbances, such as hurricanes, impact long-term preservation. This information is critical for predicting how well blue carbon ecosystems will protect coastal communities in the future and provide other ecosystem services, such as habitat for recreationally and commercially valuable fish and shellfish species.

“Blue carbon ecosystems are unique because they sit at the land-sea interface,” said Amanda Spivak, associate professor in the UGA Franklin College of Arts and Sciences department of marine sciences and lead author on the article. “We can look to marine and terrestrial systems for guidance as to the important mechanisms affecting soil carbon preservation so that we can better understand how blue carbon ecosystems work and respond to disturbances.”

Blue carbon ecosystems literally build up land by turning atmospheric carbon dioxide into plant biomass and trapping sediment particles washed in by tides. The organic carbon of this material may remain buried in this way temporarily or for thousands of years, depending on oxygen levels and water chemistry that in turn effect how bacteria access the carbon. A soil core sample from a marsh in Georgia, and a marsh in New England, and a marsh in Micronesia, would each reveal a great variation in carbon storage value, or the carbon stock in the soils of marshes. One priority for the researchers is the need to investigate the factors driving that variability.

The effectiveness of these decomposition mechanisms may also change following disturbances like large storm systems, encroaching development and sea-level rise. In effect, soil carbon storage is closely connected with the ability of marshland and mangroves to cope with rising sea levels.

“It’s surprising that after studying carbon dynamics in tidal wetlands for decade after decade we still have little understanding as to why carbon accumulation rates can differ so widely between seemingly similar systems,” said Charles Hopkinson, UGA professor of marine sciences and co-author on the paper. “The relative amount of carbon stored in the northeastern Plum Island tidal wetlands, for example, is nearly four times greater than in the Georgia Sapelo Island wetlands, yet the rates of production and decomposition are similar. The framework in this article for understanding of why these systems differ will hopefully enable us to predict the effects of climate change on tidal wetlands and their relative contribution to removing CO2 from the atmosphere.”

These coastal ecosystems store carbon as they grow vertically by putting down a new soil layer every year. But they also retreat inland, where they often encounter private property as hardscape or lawn that essentially block one mechanism that marshes and mangroves use to sustain themselves.

“From a societal perspective, that’s one reason, particularly relevant right now, that we might want to think about the processes preserving carbon in these systems,” Spivak said. “We want to make sure that they continue to build the vertical elevation that helps them keep pace with sea level, and we want to make sure that the carbon that is buried there stays there, so that they maintain their elevation and do not add to the global carbon dioxide budget.”