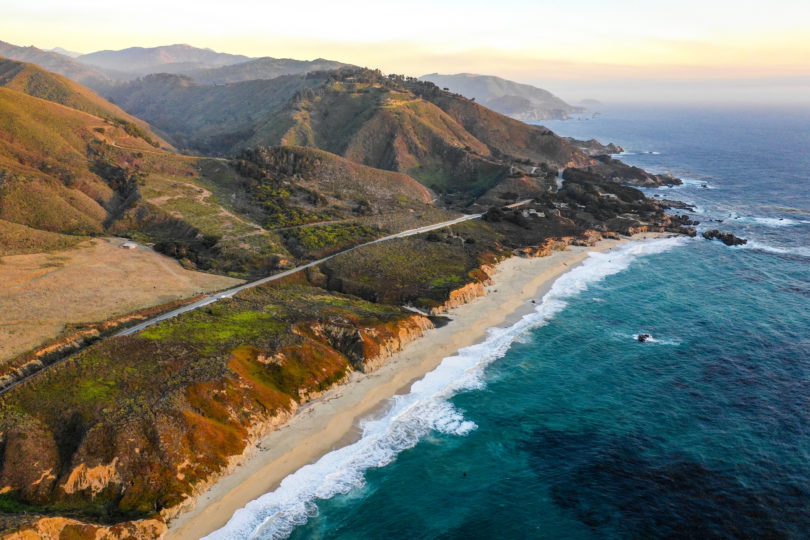 The coast along Big Sur, California.

The 200-mile zone that hugs the curvature of the coast bursts with life, from phytoplankton to whales. Out in the open ocean, this activity is comparatively diminished. Understanding how coastal water is moved offshore fertilizing the open ocean is a long-standing goal of ocean scientists.

Now, a new study from University of Georgia researchers describes for the first time using large-scale observational analyses how upwelled water is trapped along the coast and then transported offshore, expanding the zone of biological productivity. The study was published Oct. 30 in Nature Communications.

Several mechanisms effectively move water offshore, from wind-forcing to the way ocean currents interact with coastal topography with capes and sub-marine banks, transporting nutrients and carbon far offshore. The UGA team focused on upwelling, in which deep, cold water rises to the surface along the coast, in the California Current System off the western coast of North America, characterized by ocean currents moving southward.

As this current flows southward and upwelling occurs, spinning masses of water called eddies form with diameters ranging from 50 to 150 miles. Modeling studies have shown that these mesoscale eddies can trap the nutrient-rich upwelled water along the coast and transport it offshore. However, no observational study had previously systematically quantified this process. 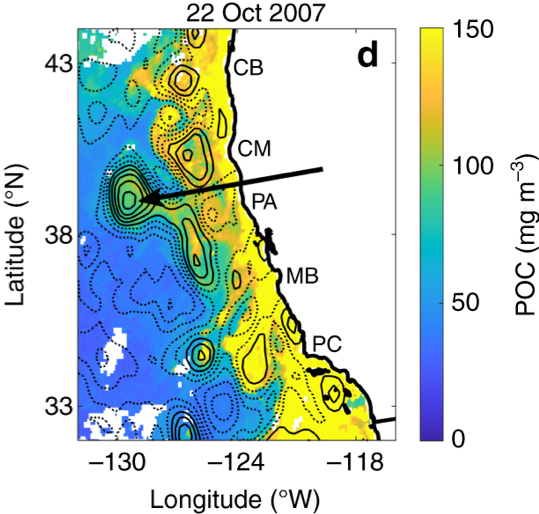 Example of offshore transport by an eddy in the California Current System. Arrow shows location of ocean eddy. Note increased carbon content in its interior compared to surrounding waters.

The researchers used satellite derived measurements of particulate organic carbon as a tracer of coastal water to show that eddies located offshore that were generated near the coast contain higher carbon concentrations in their interior than eddies of the same amplitude generated offshore.

The observations confirm that eddies are in fact trapping and transporting coastal water offshore, resulting in an offshore particulate organic carbon enrichment by coastally generated eddies that extends for 1,000 kilometers from shore. “When eddies are formed, they trap large volumes of water in their interior, move off shore, and increase biological activity as they help fertilize the entire food chain off shore,” said Renato Castelao, associate professor in the Franklin College of Arts and Sciences department of marine sciences and corresponding author of the paper.

“Our study provides the first large-scale observational evidence that mesoscale eddies are redistributing carbon and other materials in the California Current System,” said Caitlin Amos, Ph.D. student at UGA and lead author. “Our results contribute to the community’s understanding of the role of eddies in the ocean and their impacts on biogeochemical processes.”

“Upwelling plays an important role in biological productivity in coastal systems,” said Patricia Medeiros, associate professor of marine sciences and co-author. “Understanding mechanisms responsible for driving offshore transport of coastal water is important because they spread that biogeochemical signature over large areas of the ocean.”