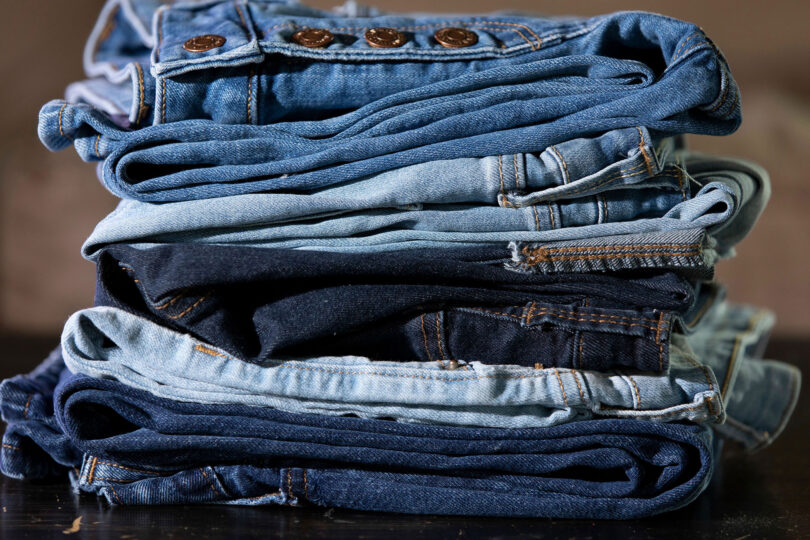 The process of dyeing jeans is one of the top sources of pollution within the fashion industry. New research found a more eco-friendly alternative. (Photo by Andrew Davis Tucker/UGA)

Flared or skinny, distressed or acid-washed—we all love our blue jeans. But those coveted pieces of denim are wreaking havoc on the environment.

That’s why researchers from the University of Georgia developed a new indigo dyeing technology that’s kinder on the planet. The new technique reduces water usage and eliminates the toxic chemicals that make the dyeing process so environmentally damaging. And to top it off, the technology streamlines the process and secures more color than traditional methods.

“The textile industry is a classic example of an environmental polluter, and one of the major causes of pollution in the industry is coloration,” said Sergiy Minko, a corresponding author of the study and the Georgia Power Professor of Fiber and Polymer Science in the College of Family and Consumer Sciences. Originally, natural indigo was used to dye textiles. Introduced to the Colonies in the 1700s, indigo was an important cash crop for early America. But the discovery of a way to produce synthetic indigo almost entirely wiped the natural indigo market off the map.

Indigo isn’t water soluble, though, and has to be reduced with toxic chemicals prior to using it to dye clothing. The denim industry uses more than 45,000 tons of synthetic indigo a year, along with over 84,000 tons of sodium hydrosulfite as reducing agent and 53,000 tons of lye.

It takes between 50 to 100 liters of water to dye just one pair of jeans. And that water, chock-full of toxic chemicals, has to go somewhere. Although there are now regulations in place requiring U.S. plants to somewhat purify that wastewater, the industry simply released it into the environment for decades, corroding sewage pipes on its way to rivers and the ocean. Even now, chemical-contaminated water inevitably winds up in local waterways, particularly in the industrial factories in developing nations where production is frequently outsourced.

Published in the journal Green Chemistry, the new method of dyeing uses natural indigo (though the streamlined process could also use synthetic) and completely eliminates the use of harmful chemicals used in conventional methods. It also requires only one coat of the indigo to secure over 90% of the color, significantly reducing the amount of water needed to dye the fabric. Conventional methods require up to eight dips in dye solution and secure only 70% to 80%. 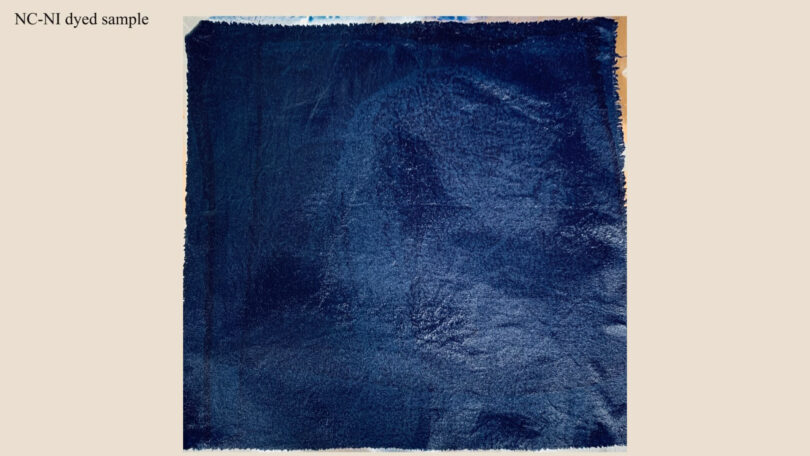 This piece of damp cotton after it was dyed using the new environmentally friendly method developed by UGA researchers. (Submitted photo) 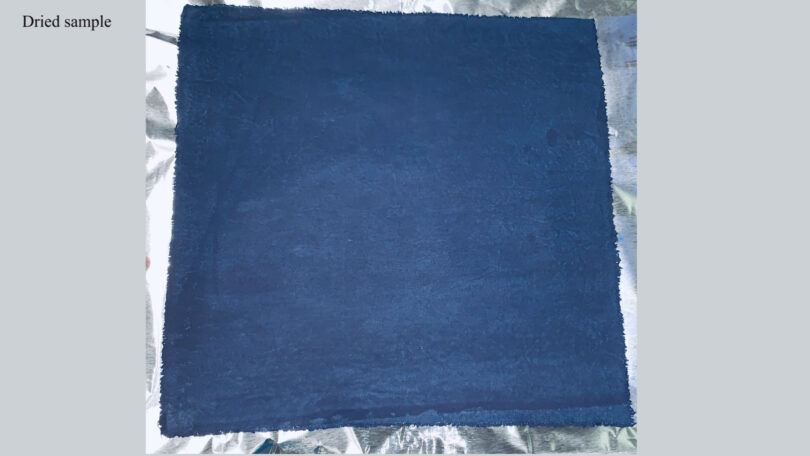 After the cotton is dyed, it dries for an hour, resulting in this uniform blue piece of fabric. (Submitted photo) 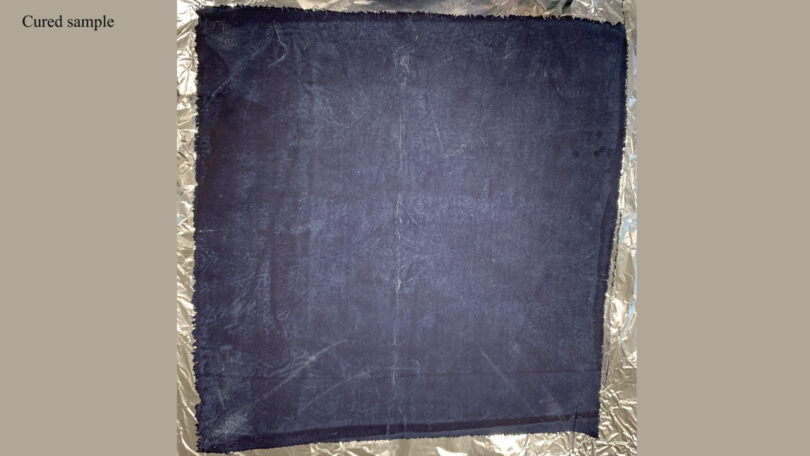 The fabric then goes into a post-dye bath followed by processing and drying time, resulting in this finish. (Submitted photo) 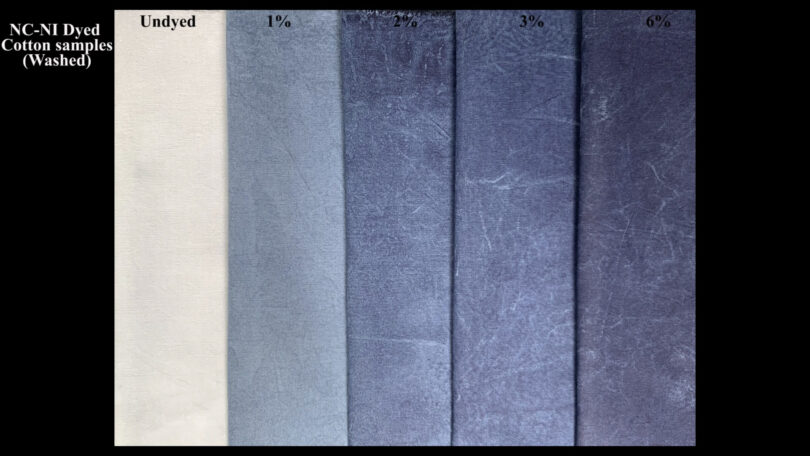 The new dyeing method can be used to create a variety of shades by varying the indigo formula. (Submitted photos)

The new method doesn’t sacrifice comfort either, keeping around the same levels of thickness, weight gain and flexibility in the fabric. Because of the streamlined process, it saves workers time and energy by eliminating the need for multiple dips and oxidation time between each dip.

“You don’t reduce the indigo in this process; you don’t dissolve it,” Minko said. “You simply mix it with nanocellulose fibrils and deposit it on the surface of the textile. And you can change the shade of blue by the amount of indigo particles added in the mixture.”

Nanocellulose is a relatively recent creation that consist of wood pulp you’d normally see used in the paper industry. The new technology mixes indigo particles with the nanofibers and then deposits them on the surface of the textile, essentially “gluing” the color in place.

The textile industry has long been known as one of the world’s most significant sources of pollution. And in the 20th century, when the world’s population skyrocketed, so did the need for mass-produced textiles, making the already bad pollution problem even worse.

Levi Strauss patented the first pair of jeans in 1873, and the practical pant soon became a fashion mainstay. Billions of pairs are now sold each year, comprising a market valued at over $90 billion.

Denim and jeans manufacturing are a big market, so even small changes in the industry could have huge impacts.” —Sergiy Minko, Georgia Power Professor of Fiber and Polymer Science

Although the new technology still needs to be commercialized, it’s a viable option for making the denim industry more sustainable.

“Denim and jeans manufacturing are a big market, so even small changes in the industry could have huge impacts,” Minko said. “There are populations that are looking for products that are made in environmentally friendly ways. And as regulations become tougher, the industry will have to adapt.”