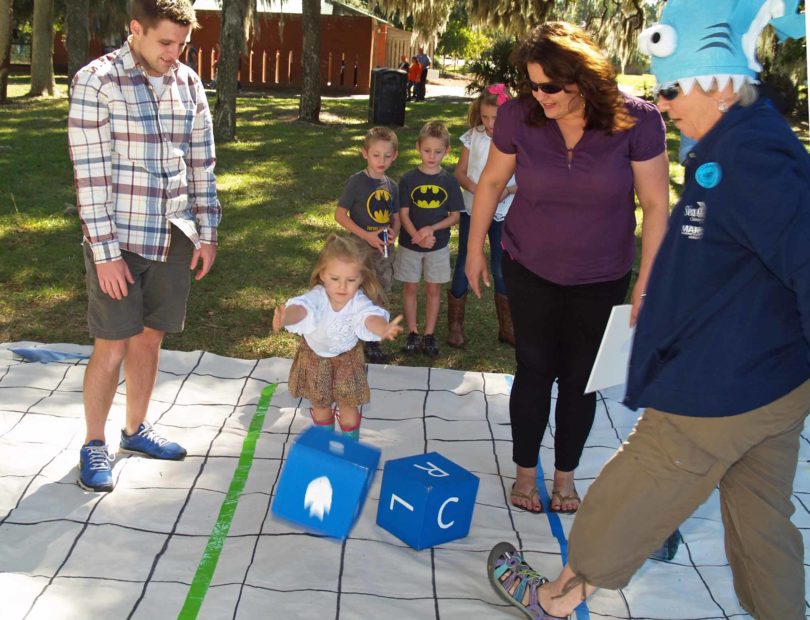 Skidaway Institute scientist Catherine Edwards and MAREX faculty member Mare Timmons (far right) cheer on a small child who tried her hand at the "Choose Your Own Adventure" game at Skidaway Marine Science Day on Oct. 25.

Savannah, Ga. – Educators and scientists from the University of Georgia Skidaway Institute of Oceanography and the UGA Marine Extension Service have developed a novel education program based on ocean robots to spark an interest in science and mathematics in middle and high school students. The team invented a board game that lets students explore different strategies for navigating autonomous underwater vehicles, called AUVs or gliders, through the ocean.

Gliders are untethered, torpedo-shaped vehicles that are launched into the ocean to collect data as they move through the water. They glide up and down by adjusting their buoyancy and pitch. Gliders can remain on a mission for weeks at a time, equipped with sensors and recorders to collect observations of temperature, salinity, dissolved oxygen, and other biological and physical conditions, even under the roughest weather. Every four to six hours over their mission, they surface and connect to servers on land to report their position and vehicle and mission information. They also can send data back to shore or receive new instructions from pilots anywhere in the world. Skidaway Institute’s glider, nicknamed “Modena,” has been used in several recent projects, including “Gliderpalooza,” a simultaneous, cooperative launch of dozens of AUVs from different institutions in 2013 and again in 2014.

“Gliders are education-friendly, but the existing outreach activities are stale,” Edwards said. “We are developing the next generation of AUV outreach programs by combining cutting-edge, interdisciplinary research with educational activities and strong STEM components.”

The AUV activity/game is a part of an outreach program targeting mostly middle school students and it highlights the problem of working with the strong tides that are characteristic of the Georgia coast. A big issue in operating gliders is developing a guidance and navigation system that will function well in strong currents. The fast-moving Gulf Stream, located roughly 100 miles off the Georgia beaches, also introduces navigation problems.

“Although the AUVs have Global Positioning Systems and can be programmed to travel a set course, tidal and Gulf Stream currents can exceed the glider’s forward speed, which can take the instrument off course and keep us from collecting data where we need it,” Edwards said. “By estimating forecasts of these currents in advance, our software system can predict the best possible route for the glider to take, which helps collect the best possible data.”

On the education side, the predictability of tides makes the proposed program highly intuitive and education-friendly. The activity/game incorporates student role-playing as an AUV maneuvers through a playing field of vector currents on a game board. The student decides how many of his or her moves to spend fighting the current and how many to spend moving toward the finish line. Successful arrival at the destination depends on how the individual pilot responds to currents en route.

Activities depend on grade level, so middle school students have different objectives than those in high school. However, all the activities address the direction and speed the AUV travels to a destination. The AUV direction and speed will depend on the sea state, such as strong currents, storms or high winds.

Teachers April Meeks and Ben Wells from Oglethorpe Academy have offered their classes as a test-bed for the game. The two have worked closely with the team to integrate classroom concepts into the game and guide discussions about strategy based on the math. Since the activities are multidisciplinary, the teachers’ expertise in building a math curriculum has been valuable as the team integrates concepts of marine science, math and engineering into classroom activities. Rolling giant dice is a fun activity that attracts the students-everyone wants to roll the dice. So far, the feedback has been very positive.

“The students really seem to love it,” Sweeney-Reeves said. “More importantly, they are making the connection between the game and science, and learning.

“It took a period of time for some students to understand the concept but after starting the second round, they had the game/activity figured out. The excitement peaked at Oglethorpe Middle School when Mr. Wells played against the students and we really saw the competition heat up.”

Edwards added, “We knew we had a hit when we saw students jump up in celebration when the currents were favorable and pout when they were blown off course.”

The team demonstrated the game at the campus’s annual open house, Skidaway Marine Science Day, in late October, with a life-sized version of the board game with giant dice. Over 120 students played the game, racing against each other as they explored different strategies to win in three- to five-person heats. Sweeney-Reeves and Timmons also rolled out the game for educators at the Georgia Association of Marine Educators annual conference on Tybee Island earlier this month.

“The conference attendees were excited to use the giant dice to roll and hedge their bets on where they could navigate to the finish line,” Timmons said. “This is much like how the AUV is programmed to reach its sampling assignment in the ocean.”

Timmons said the teachers at the conference laughed as they saw the big game board spread out on the sidewalk. “Towards the end as teachers were close to the finish line they shouted, ‘right!’, mentally trying to encourage the roll of the die to their advantage.”

Timmons and Sweeney-Reeves think the game has real-life applications and hope the students can use the concepts they learn in the classroom for swimming in our own local waters. The next step is to expand the classroom demonstrations to Coastal Middle School in Chatham County and Richmond Hill Middle School.

The activities allow students to develop analytical skills in a program that will be compliant with Next Generation Science Standards for the 21st Century in the common core state curriculum.

“We hope this one-year program will serve as a springboard for future funding and continued joint outreach by Skidaway Institute and Marine Extension,” Edwards said. “We’d love to develop computer games and apps for tablets and mobile phones that let students fly gliders through even more realistic scenarios based on the measurements we collect in real time.”

The Skidaway Institute of Oceanography is a research unit of the University of Georgia located on Skidaway Island. Its mission is to provide a nationally and internationally recognized center of excellence in marine science through research and education. The UGA Marine Extension Service is a unit of the Office of Public Service and Outreach.