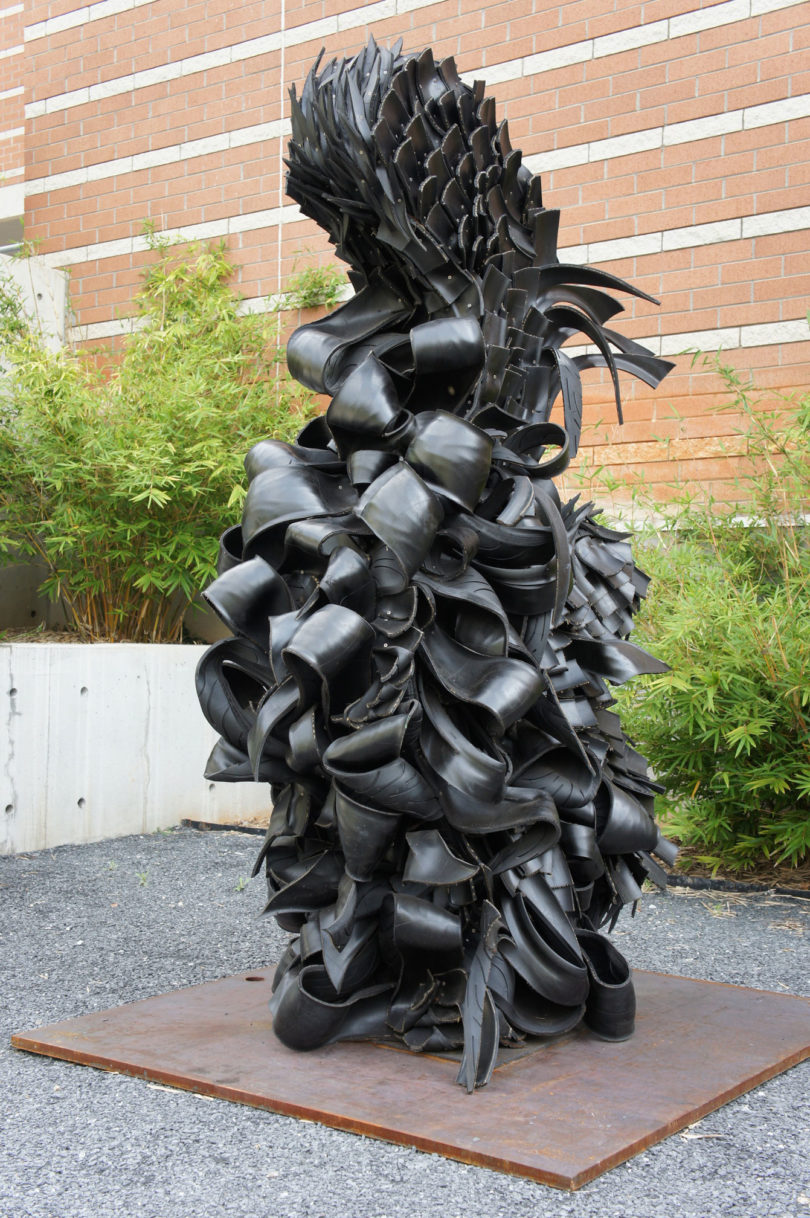 Athens, Ga. – Two exhibitions of sculpture, “Defiant Beauty: The Works of Chakaia Booker” and “Remixing History: Manolo Valdés,” are currently on exhibit at the Georgia Museum of Art at the University of Georgia. Four of Booker’s assemblages of steel and rubber, in the Jane and Harry Willson Sculpture Garden, and three of Valdés’s bronze sculptures, on the grounds of GMOA and UGA’s Performing and Visual Arts Complex, are on view until April 30.

Referred to as a “radial radical,” Booker, an African-American artist born in New Jersey, is known for using discarded tires in her monumental abstract works. To create such towering and intricate forms as “Shhh,” one of the more imposing sculptures on view at GMOA, Booker must first rip the tires apart, cutting through bands of steel with industrial-strength tools. She then slices, twists, folds and mounts the strips of rubber onto stainless steel or wood armatures, transforming them into dynamic and highly textured objects.

Booker received a bachelor of arts in sociology from Rutgers University in 1976 and a master of fine arts from The City University of New York in 1993. She has studied a variety of subjects, including African dance, ceramics and weaving, all of which influence her work in sculpture. She currently lives and works in New York City.

Spanish-born Valdés is known for his paintings, prints, drawings and sculptures, which draw heavily from Spanish art history through appropriating and simplifying familiar forms. Many of his subjects reveal art-historical motifs. Caballero V, for example, which depicts a man on horseback, alludes to the works of Diego Velázquez, the famed 17th-century Spanish court painter. Regina II and Ada, both busts of women with elaborate headdresses, relate to the paintings of Henri Matisse. Their expressionless, blank faces contrast with the swirls of metal that recall botanicals and galaxies.

These three freestanding sculptures’ size and presence draw attention on UGA’s East Campus. According to Valdés, “The success of the sculpture does not depend on how I envision them when I create them; it is about how the environment creates the sculptures.”

Valdés’ monumental sculptures have been on view in major cities of the world, including Paris, Barcelona, New York and San Francisco. He lives and works in New York and Madrid.

GMOA deputy director Annelies Mondi expressed her excitement for “…the opportunity to exhibit at the museum and on UGA’s campus these monumental sculptures by two very different yet equally important artists. With their references to a wide range of topics from literature and painting to recycling and factory labor, the works of Valdés and Booker provide much fodder for interdisciplinary study. It is my hope that these two exhibitions will inspire viewers to think about and discuss not only the works of art but also the world around them.”