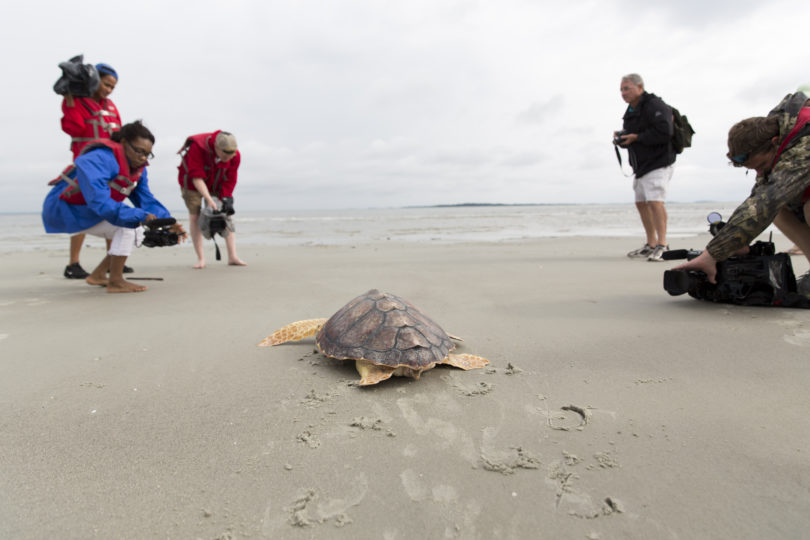 Local media cover the release of a 3-year-old loggerhead sea turtle, Ossabaw, after it was transported and arrived at Wassaw Island National Wildlife Refuge along the Georgia coast. (Photo by Andrew Davis Tucker/UGA)

Over the past decade, researchers at the University of Georgia have been genetically fingerprinting loggerhead sea turtles, vital to the conservation of the endangered animals.

Now they’ve been recognized for their work that has spanned more than a thousand kilometers of coastline every nesting season. The University of Georgia Sea Turtle DNA Fingerprinting project, which is based in the UGA Warnell School of Forestry and Natural Resources, was honored with the International Sea Turtle Society’s President’s Award this month.

The award was presented to the research team, which is led by Warnell professor Joe Nairn, who has overseen the fingerprinting project in his lab since it started in 2008. “It is a real honor to receive this award. It recognizes the enormous contribution of hundreds of collaborators, many of them volunteers, and their efforts to conserve our natural resources and this unique loggerhead turtle population.”

Since 2008 when the project began, Warnell researchers have genetically tagged every nesting female loggerhead sea turtle in Georgia, and starting nine years ago added the entire Northern Recovery Unit to the list. That unit encompasses Georgia, South Carolina and North Carolina, and the tagging effort covers more than 1,000 kilometers of coastline.

“We use an egg shell from each nest to extract ‘Mom’s’ DNA and create a unique DNA fingerprint for each turtle, just like DNA fingerprinting for humans,” Nairn explained. “We use this to match each nest to an individual turtle. Most turtles nest multiple times in a nesting year, nesting every two to four years, and this allows us to monitor reproductive output over time and space.”

Loggerhead sea turtles were put on the endangered species list in the 1970s. Found in the Atlantic, Pacific and Indian oceans, loggerheads are some of the largest and most visually striking turtles in the world. Once hunted for their meat and eggs, loggerheads have also historically been prone to being unintentionally entangled in fishing nets. Combined with naturally high mortality rates for small juveniles, this caused the turtle’s populations to decrease worldwide. The southeastern United States hosts one of the two large loggerhead assemblages globally and is critical to conservation of the species.

Nairn said they’ve assigned more than 68,500 nests, identifying 10,852 individual loggerhead females that make up the NRU. The team can then track these turtles in successive years when they remigrate to nest again. The data they’ve collected has revealed that clutch estimates—the number of nests from an individual turtle in one year—has been historically underestimated.

“Our data produces a more accurate estimate of the number of female turtles nesting in Georgia and the NRU,” he said. “The data also has shown that not all turtles remigrate in two to four years, with some only nesting every six to eight years.”

That’s not all, he said. Warnell assistant research scientist Brian Shamblin has also shown that green turtles nesting in the NRU, primarily North Carolina, represent a distinct subpopulation, which is different from the green turtles that nest in much higher numbers in Florida.

“We recognize the hundreds of volunteers we call citizen scientists, wildlife biologists from the state agencies, and all of our graduate and undergraduate students that have made this project possible and such a success,” Nairn said. “Special recognition should go to Shamblin of Warnell and Mark Dodd with the Georgia Department of Natural Resources for their exceptional efforts in making this project successful.”